I hope you've had a great Christmas. I have.

Wake Up With Me 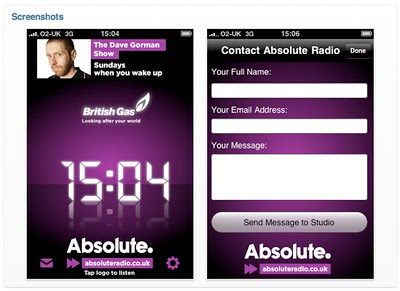 Do you have an iphone?
Would you like an app that will act as a cheeky alarm to get you up in time for my radio show and make it easier for you to contact us when we're on air?
For free?
You would?
Then take a looky here because Absolute have just launched three apps that do just that for their three morning shows. Christian O'Connell on weekdays, Frank Skinner on Saturdays and me on Sundays.
Go on... you know you want to.
Posted by Dave Gorman at 11:10 AM 3 comments: This is the first really Christmassy thing I've done so far this year.

I think I ought to start my Christmas shopping now. Eek.

I think calling them "attacks" is probably a bit much.
Posted by Dave Gorman at 2:54 PM 6 comments: 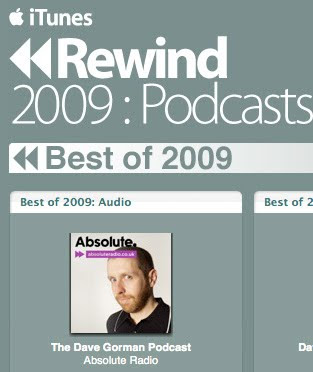 I was having a vaguely stressful time of it this morning. Nothing major - I just forgot I was meant to be somewhere and then had a phonecall asking me why I wasn't there and then had to race around more than I'd normally like to. I hate being late. I hate feeling like I've let people down. I apologised. They were fine. But it still left me feeling a bit discombobulated.
But... we got the work done and then I emerged into a crisp, sunny London day and turned my phone on and found some good news waiting for me.
Which I've rather given away with my choice of illustrative picture.
The news was that, according to whatever arcane method Apple use to work out their Best of 2009, our podcast has come in at the top of the audio bit. I'm tempted to find out if it's a list of things arranged in alphabetical order but I won't look in case it takes the shine off things.
Making the show (and the podcast) has become surprisingly fun. Hang on, that sounds like I wasn't expecting to enjoy it. I was. That's why I agreed to do it in the first place. But I'm enjoying it far more than I thought I would.
I particularly like the way the podcast has taken on a life of its own outside the show. We get a lot of texts and e-mails during the show - which is fabulous - but it would be very easy for people listening to the podcast to feel excluded from the interaction, to feel it's not worth sending us an e-mail on a topic on the assumption that, by the time they get to listen the show is over.
But a few people e-mailed us their thoughts on things so we started to include that in the podcast and that encouraged more people to do so and so it grew. Our first couple of podcasts were close to thirty minutes each... our last couple have been nudging an hour. It's your fault you know. Yes. You.
And it's all really appreciated. I love working with Danielle and Martin (and Emma and Phil) and I love reading the diverse e-mails that come in and the feeling that every discussion could go on for ever in podcastland.
I guess I was expecting to enjoy the show and to spend five minutes recording an intro for it. That we've ended up recording so much more is a sign that a) we're enjoying the show and b) we see the podcast not as a chore but as a fun entity in and of itself.
Cheers!
Incidentally, there's a sort of mini-podcast out today. That is, it is mini but it's not a mini-version of the normal podcast. It's something else entirely - not specifically related to the show - put out under the same banner. I guess it's 12 minutes of me doing some extra-curricular work for Absolute and interviewing Doves before their excellent Christmas Session that I mentioned a few days ago.
The video of the session is in my previous post and there's a video of the interview over on youtube too.
Posted by Dave Gorman at 3:08 PM 3 comments:

I hosted one of the Absolute Radio Christmas sessions the other day with Doves. They were ace. Here it is:

Posted by Dave Gorman at 7:57 PM No comments:

The Little Mermaid (In front of the big pumping station) The Little Mermaid (In front of the big pumping station), originally uploaded by Dave Gorman.

A photo from January... seems like an appropriate image for the Copenhagen Climate Summit...