Have you ever wondered what Laurel & Hardy would look like if they each had the other's nose and mouth? 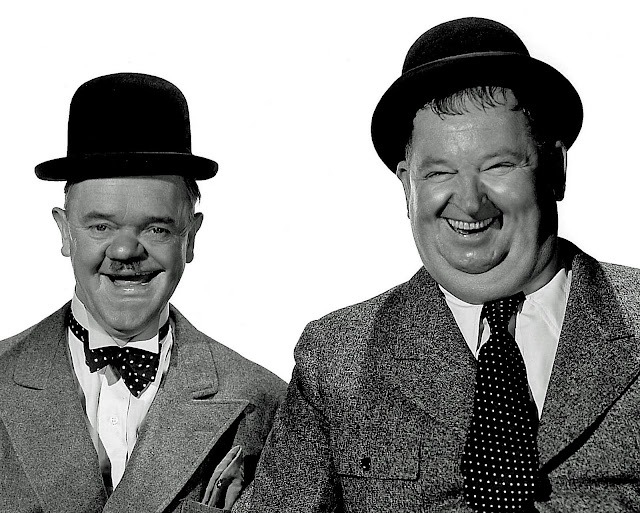 It's Not What You Say, It's What You Don't Say

On Saturday night I was a guest on the Radio 4 show, Dilemma. As I made my way home that night I was sitting on the tube chatting idly with Mrs Gorman when the man sitting across from us leaned forwards with something of a conspiratorial look in his eye.

"Strip clubs are wrong," he said.
I paused, unsure as to how best to respond. I shrugged my shoulders, "I just don't get them," said I,

And then the train pulled into a station, he stood up and left.

That was it. That was our entire conversation. There wasn't any preamble. There had been no hellos. There were just those two sentences.

The woman sitting next to his now empty seat had clearly overheard the exchange and was looking more than a little bemused by it. As well she might. We must have looked like spies. Fortunately it wasn't that cryptic to me. Odd, yes. But not cryptic. I knew what he was on about. Or at least I could work it out.

In December I'd been a guest on another Radio 4 show, I've Never Seen Star Wars. (Radio 4 shows are like buses to me, you wait ages for one and then two come along in the space of two months. Oh hang on... that's not buses is it.)

On I've Never Seen Star Wars the idea is that the guest takes on new experiences - things they've never done before that maybe they should have done, or that most people might expect them to have done - and then discuss them with the host, Marcus Brigstocke. For example - and I know this is hard to believe - Les Dennis had never eaten cheese. I know.

For my episode I tried my first water-cooler conversation, went horse riding, read some Dickens  and visited a strip club. While it was recorded in December it was broadcast just last week (it's still on the iPlayer and is available to download for the next 7 days so you can listen to it if you like).

So when the stranger leaned across a tube train and said, "Strip clubs are wrong" I knew that what he meant was, "Hello. I heard you talking about strip clubs on the radio recently and I'm inclined to agree with you. They're weird aren't they?"

But because he didn't say that... I had to fill in the blanks and work it out. It didn't take long - (of course I had to consider the possibility that it was just a coincidence, that he hadn't heard me on I've Never Seen Star Wars and was just that-man-on-the-tube-who-starts-weird-conversations-with-strangers but I checked his shoes and both sets of laces were tied so I figured that was unlikely) - but it was long enough to make our two-sentence conversation appear just that little bit more stilted.

As the doors closed and the train continued on its journey Mrs Gorman said, "That must have sounded very strange to anyone else."
"It did," said the woman sitting opposite. "Yes. It did."

I thought about trying to explain it to her. But leaning over to explain it would involve explaining what I do for a living - or worse still, assuming that a stranger knows what I do for a living - and that would make me sound like one of those don't-you-know-who-I-am? twonks. I mean, what if the person next to her hadn't overheard the weird strip-club conversation but had heard me trying to contextualise the weird strip-club conversation? It doesn't bear thinking about.

So I said nothing. I hope she thinks I was spy.

I've been watching a lot of Breaking Bad recently. This has been bugging me.