Cause And Effect Aren't Always Easy To Discern

I will be sorry to see the end of this tour. I still hugely enjoy it every night. Not just the show, but also meeting the audience after the show, something I do wherever possible. So far on this tour, the only time I didn't do it was after the extra afternoon show in Cheltenham... but that's because we were doing two shows that day and we had to empty the theatre and then fill it up again about 15 minutes later...

I completely understand why not everyone does it - and in truth, if it wasn't for the technical side of my shows, I might not do it either. I come off stage and I'm knackered and the priority is to get to our hotel beds as soon as possible. But because it takes time to take the screen down and pack away all of our kit, I figure I might as well use that time to do something fun and that audiences seem to appreciate.

But every now and then, something happens to make me think about not doing it. It seems that, for some people, it's not enough and that leads to upset. And maybe if I didn't do it at all that would be avoided. I got a taste of one such thing this week... although it seemed to be a reaction to a show from over a year ago.

It started with an innocent tweet featuring a picture I'd taken backstage at the Everyman in Cheltenham last Sunday.


At first glance I thought someone had left a Terrys Chocolate Orange in the toilet... pic.twitter.com/TXcuJdqJys
— Dave Gorman (@DaveGorman) November 11, 2019


It really is what I had first thought when I used that loo before the show. As it goes, I was delighted to discover it wasn't and that the theatre were thoughtful enough to have their loos so well stocked. But the coincidence of the packaging resembling something else so familiar seemed odd. And lots of people seemed to agree. On a computer screen the text might be legible, but when I look at the image on my phone it still looks like a Terry's Chocolate Orange to me and I have to zoom in, in order to reveal it's true nature. I imagine lots of people on Twitter had to do the same.

But one person seemed to take offence.

Which is one of those Twitter moments that just makes you sigh. If it's possible to find offence on Twitter, someone will. My assumption is that they're imagining my tweet to have an undertone (or indeed, a heavy overtone) of old-fashioned, "ugh... periods... tampons... yuk!" Which isn't what I intended at all. So I thought a simple explanation would settle things down.

Reader, it did not settle things down.

Okay. Maybe she's unfamiliar with the packaging of a Terry's Chocolate Orange? Maybe she thinks my tweet means that I looked inside the box and saw the tampons and thought they looked like chocolates. Well, surely sight of the box and an understanding that it is really quite similar would explain things... 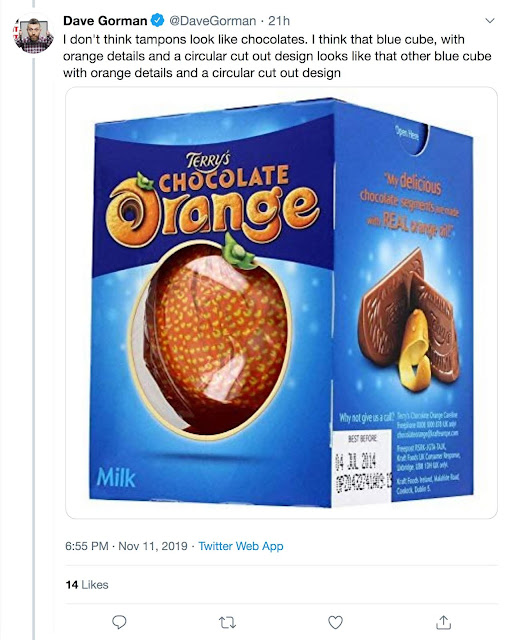 Reader, it did not explain things...

This strikes me as a slightly odd reply as we seem to have left the topic of whether or not two similarly sized and similarly coloured boxes look alike and moved on to new territory. It seems my correspondent has some more long-standing grievance with me... dating back to the Wolverhampton tour date. Which was nearly a year ago.

Sometimes the tour dates can all blur into one, but the Wolverhampton show remains pretty clear in my memory for a number of reasons. The show had originally been booked in to the Civic Hall in Wolverhampton. But the Civic Hall needed to be rewired and had problems with asbestos and so all of their events - including the Grand Slam of Darts and shows by me, Jason Manford, Joe Lycett and Sarah Millican were moved to a new venue, Aldersley Leisure Village, 10 miles outside the city centre. There were plenty of discussions about whether the new venue - a large sports complex - would have the required lighting/staging/sound system to cope with our show - but in the end they persuaded us that it would all be in order. And it was. They effectively built a complete theatre rig inside a huge sports hall.

The idea that I'd expressed any sense of being too good for the audience (that included my Mum, two of my brothers, a sister-in-law, a niece and a nephew) seemed peculiar because... well, because I've simply never felt it, let alone expressed it. So I wanted to know where this was coming from. 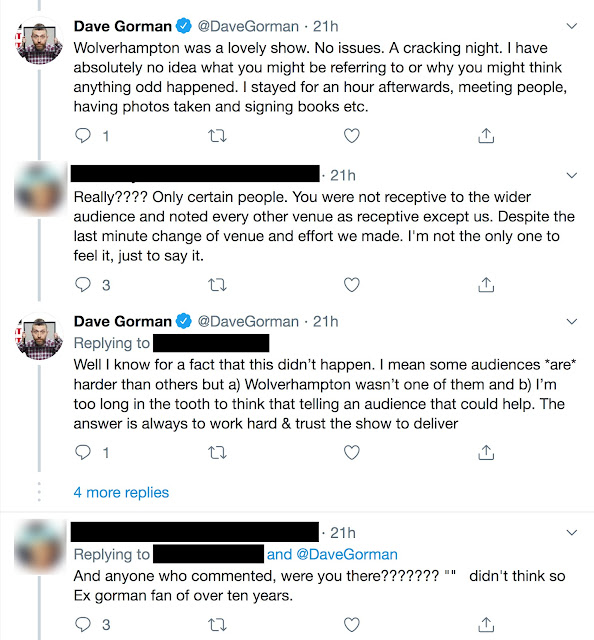 All of which seems most peculiar. Because it contains quite specific details. Of course, I know it's possible that someone didn't enjoy the show. But the idea that I'd actually said - or otherwise conveyed - that the Wolverhampton audience was shit and that every other audience had been better just doesn't make sense. I mean, I know it just didn't happen. It's entirely possible that I referred to the change of venue and called it 'Not Wolverhampton' or somesuch... and maybe someone had hugely misunderstood what that meant. But the idea that I'd dissed it, them and noted that other audiences were better... nah... there's no way anyone could come away from the show thinking I'd done that.

Of course, other people were joining in the conversation at this stage. And my correspondent was giving them short shrift. 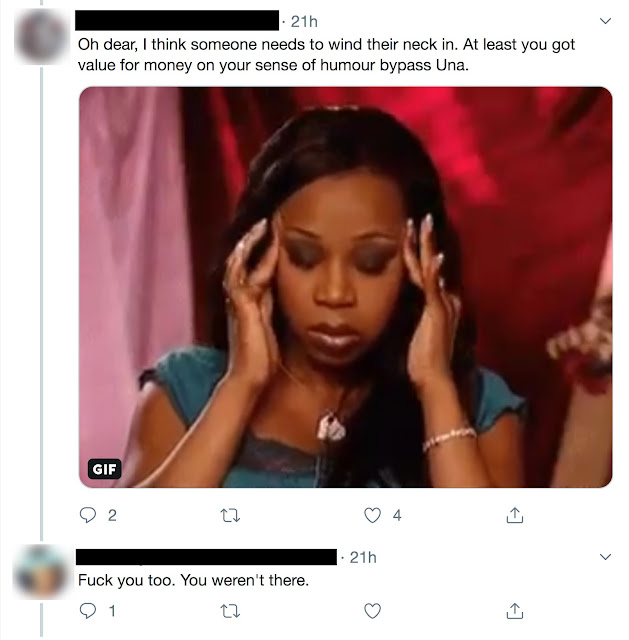 I mean... you can't really say, 'Fuck you too' to someone who hasn't said, 'Fuck you' first. And the same person also received a reply to say. 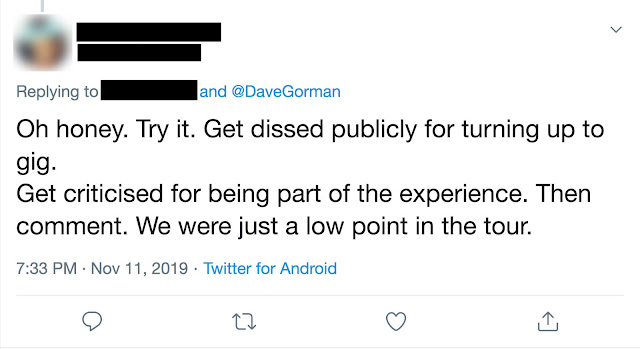 Which repeats the idea that I had somehow attacked that night's audience - or at least some of them - for coming to the show and that I'd said they were a low point. Which I didn't. Because they weren't. And because I wouldn't, even if they were.

And when TV's Helen Chamberlain explained that she'd thought the photo was of a Terry's Chocolate Orange... she too was given short shrift... 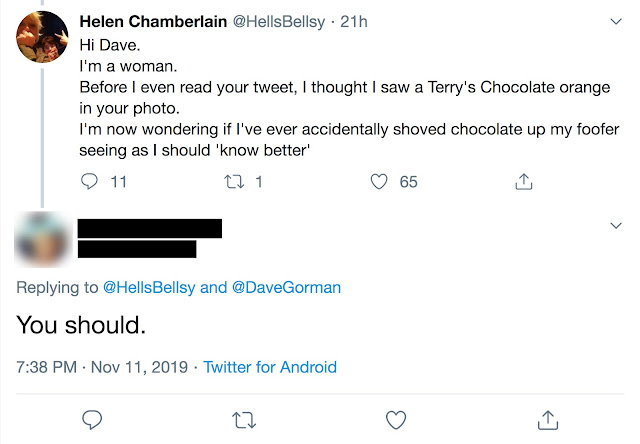 Now all of what I've described so far is, I'm sure, a fairly common occurrence on Twitter. Someone takes offence, digs their heels in and lets loose with their anger. It clearly happens all the time.

But it made me wonder if she had mentioned it at the time. Maybe if she had I would discover what had actually happened to give her such a different impression of the night. So I used Twitter's advanced search feature to look it up.

And I found this... which, as I started reading, made me think that maybe something had happened after all and I was the one with a dodgy recollection...

Really! I have no memory of losing my shit on stage. How have I blocked that out? How have I failed to remember some, awful, on stage rant? Oh... read on... it turns out I haven't.

So it turns out that the person who remembers the show as such a disaster and feels so slighted by the whole experience was actually tweeting a couple of hours after the show to say that she'd enjoyed it and would be booking my next tour too.

I gather she's since tweeted that the show was good and that it was my attitude after the show that was so upsetting. (I can't corroborate this as she has now blocked me.)

That's what I meant when I said I sometimes pause to consider whether I should bother to meet people after the shows. I mean, if it can be taken this badly...

But then again... if it's true that I did or said something after the show to upset her, it would suggest it was something I did after 1.11am that night. Which seems unlikely, as at that point I was in the passenger seat of the tour van as we did a night drive to London after that particular show.

But maybe I did say something that upset her and it's only after she'd dwelt on it a while that the upset overtook any other emotional response to the night. Although... that would make this  tweet from February just a little strange also... 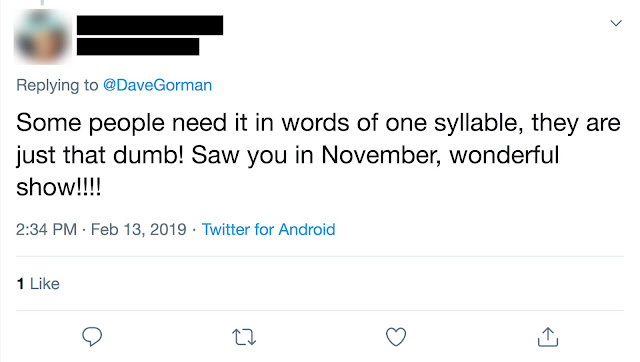 Quite how it's possible to have loved a show on the night, still have fond memories of it three months later, but to then decide you hated it a further nine months on is beyond me. I mean... it can't honestly be just because I think one box looks like another, can it?


PS: I've covered up her username and avatar in this post for good reasons. I know it's possible to search for her. Please don't tweet her or try to get involved. I'm not sharing this story because I wish her any ill-will. The last thing I want is to cause a pile-on. I just wanted to share this oddity from my point of view. If anything, I think the take home message is that words expressed in anger are often not to be taken at face value. Although the inability of people to step back and see that perhaps they have the wrong end of the stick does seem to be quite a thing on Twitter in particular and doesn't seem particularly healthy. I do kind of doubt that she'll be booking for my next tour as promised

If you want to come along to this tour, you have a small number of opportunities left. Weston Super-Mare on Thursday, Guildford on Friday, Northampton on Sunday and London on Tuesday. Come along and maybe you too will enjoy yourself on the night only to convince yourself that you hated it by this time next year!
Posted by Dave Gorman at 12:41 PM 22 comments: