At this special time of year I think it's nice to pause and remember what - or who - it's really about.
Colin Hughes.


Thanks Cliff
Posted by Dave Gorman at 5:10 PM No comments:

Mrs Gorman and I were out for dinner this evening. Part way through the meal I looked across at her plate and noticed that she'd managed to cut her steak up to resemble a map of the United Kingdom. 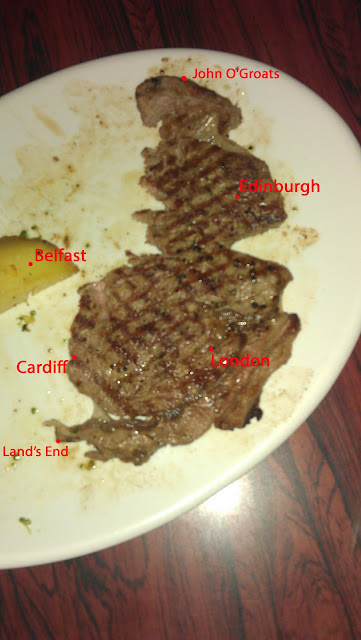 She claims it wasn't done on purpose. I'm not sure that explains the small bit of potato so handily positioned to represent Northern Ireland, though.

Blimey, The Duke of Cambridge Really Is Looking Patchy On Top These Days 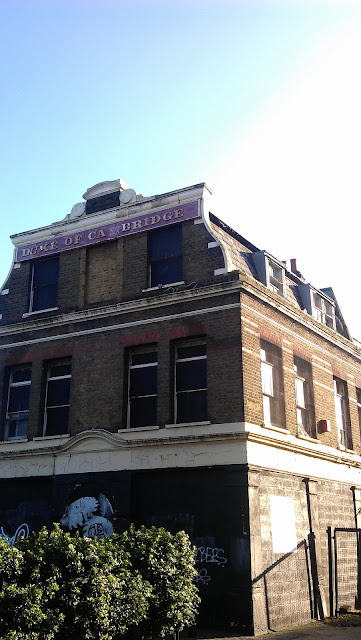 Not so long ago I had to abandon an email address because it was getting upwards of 30,000 spam emails a day. The idea of filtering through that inbox to find the odd legitimate email was obviously a bit ridiculous.

I don't get 30,000 spam emails a day any more... but it's regularly into the hundreds. And as much as I detest it, it is kind of fascinating.

When I first encountered spam it seemed to be that it was related to a limited number of things: "Rolex" watches were quite common. As were inkjet cartridges and home loans etc etc. (The old, "I need to smuggle some money out of Nigeria and you are the man I trust to help me" emails aren't spam as such, they're a different kettle of con entirely).

I understood the mathematics of spam in those days. If your email at least appears relevant to someone there's more chance of them falling for it. So sending designed to appeal to the needy and the greedy made sense.

If you send it to a million people you only need a tenth of a percent of them to fall for it to have 1000 mugs in the game. And it doesn't matter what it is you appear to be selling because you're not actually selling anything. I'm told that spam is - for the most part - just trying to get your details. It's your name, address and phone number they really want. Information is valuable in today's economy.

But recently the spam I've been getting has been incredibly niche. And this confuses me.

I've had spam telling me about "great deals on forklift trucks". Really? What percentage of people would even read beyond the first line? How many people actually buy forklift trucks anyway? It's not exactly an impulse buy. "I only came in for some paint but they'd put the forklift trucks by the counter and, well... yellow is so my colour, so I just had to get one."

Likewise premium grade aviation fuel. Surely the people charged with buying aviation fuel are a) limited in number and b) pretty wise to spam.

Aren't the spammers just cutting the number of potential dupes down before their evil words have even hit our inboxes? 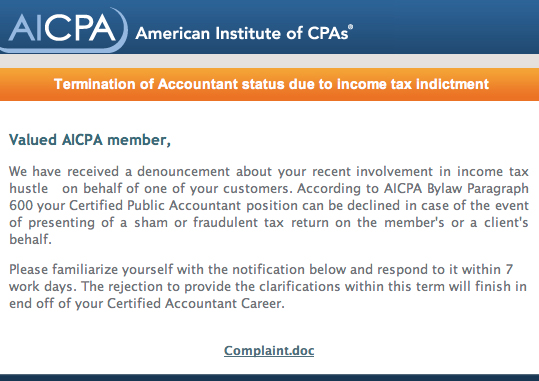 There's no guess work required here. I can speculate as to how many people buy forklift trucks or aviation fuel... but really I'd just be plucking numbers out of thin air. But I can find out how many people are in the AICPA.

According to the AICPA website, there are 370,000 members. So in the whole wide world, there are only 370,000 people who can genuinely fall for this spam. And how many of them are actually receiving it in the first place? If I'm getting it, it's not as though this email has been sent to a highly targeted list of addresses. It's the same scattergun tactic as all other spam.

I'm really struggling to believe that anyone on earth has fallen for this. If you're not an American Certified Public Accountant the "threat" from the AICPA to end (off) (of) your career is a bit of an empty one so there's no reason for anyone else to respond to it.

And if you are an American Certified Public Accountant you're surely equipped to spot that this isn't legit. If you are and you do, I'd suggest you need a change of career.

But put yourself in the crook's shoes. Imagine creating this email. You've bothered to steal the logo and the colour scheme from the AICPA website. You've formatted the graphics and made it look nice. Would it really not occur to you to, just maybe, find someone who has English as a first language to proof read it first? Are the spammers so stupid they think Google Translate is good enough?

Or is there something I don't understand about how this works?

PS: Just as I published this, another, almost identical email arrived. 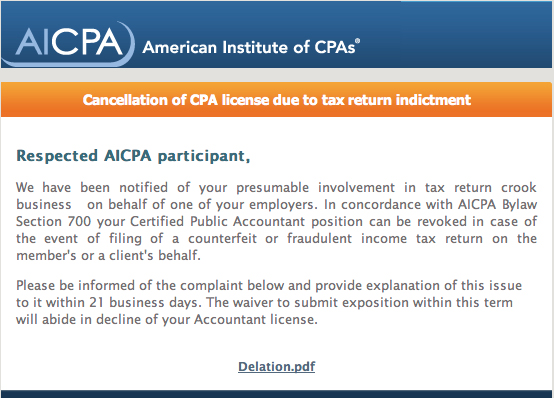 This time, I think I might be in trouble. They're on to me and my tax return crook business. I hope I don't waiver to submit exposition within this term.

PPS: And then another... 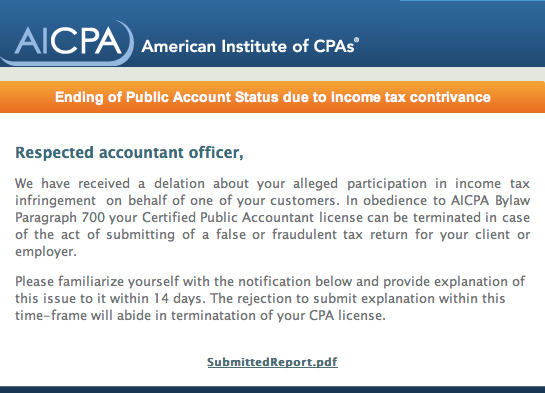 ... is it just me, or isn't it even less convincing when they send three in such quick succession? Isn't it just three times as unconvincing? Wouldn't one, well written, email have been more effective? 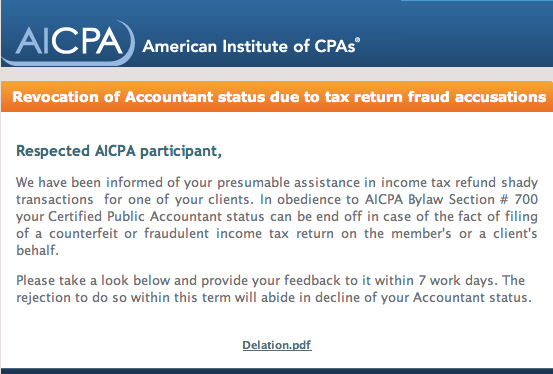