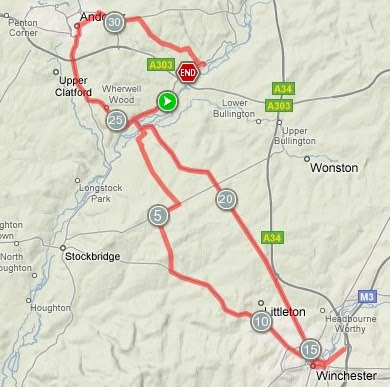 The second of the Andover previews was far better than the first. It just had a different, sillier atmosphere right from the start. Sometimes I need to remind myself not to worry so much about getting it "right" (whatever that means) and to just go out and have fun instead. When I do that, I tend to remember it better anyway... I don't know how.

Of course the first show came not long after a 71 mile bike ride and the second came after a day of kicking myself for not being at my best the night before so that might be a factor. But I don't think it was tiredness that affected the first show... I think I was just concentrating too hard and as a result it felt a bit too much like the audience were watching someone work instead of watching someone have fun.

But I need to make sure so today, before the third Andover preview, I've been out for a training ride - just a 35 mile, made-up-as-I-went-along figure of eight loop from my temporary base in Longparish to Winchester, through Andover and back. (You can see an interactive version of the route here) Now I'm looking forward to tonight. And the tour.
Posted by Dave Gorman at 3:33 PM

This is excessive preparation (even for you) to prove that the cycling doesn't get in the way of the humour.

Then again, it's the kind of thing we come to expect from you! Hope last night was up to your own high standards.

your right, i came to the thursday night and friday night shows (don't ask long story involving tickets,mates, and money) but you're right to an extent but you should not be to over critical of yourself, the mates i went with on the thursday said it was really good and they like i did really enjoyed it.
as for the friday night your spot on that there was a different, siller atomsphere there was indeed and i thought you thrived on it.
Anyhows this should not distract from how good i think the show is, i have not laughed as much as i have for a long time...
good luck with the tour proper, i'm going to try and see it again at some point...

@Richard: thanks for that. It's refreshing to hear from someone who has seen the same show twice and who can confirm my view of it. (That said, I wouldn't recommend anyone seeing it more than once.) The thing is, the atmosphere is, in part at least, created by me and I know that I stifled my own silliness on the Thursday and let it go on the Friday. And the result was a better show.

It wasn't a conscious effort to play sillier (and I don't want 'sillier' to make the show sound like it's for kids) it was more about an attitude. On the first night I went on thinking, I must try and remember all of this and on the second I went on thinking, I'm really going to enjoy this. It's what previews are for.