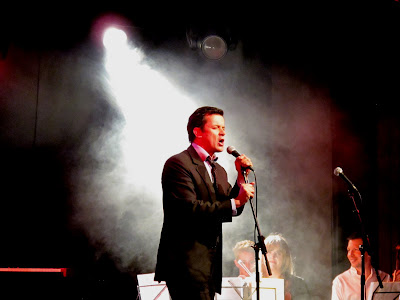 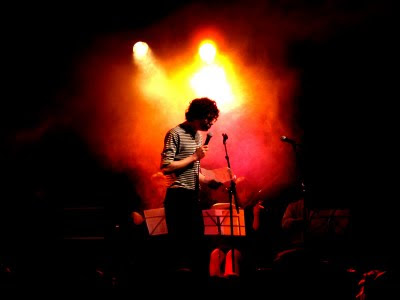 It's taken me a while to sort through my photos but it's worth saying that last Saturday's Karaoke Circus gig was hugely enjoyable.

I'm a one-trick pony when it comes to karaoke. I can't sing but I will stage dive and I hope that having a fat man throw himself on to the heads of the audience will make them forget how bad his singing voice was.

It seems to work. It's easier when there's a raised stage and a standing audience obviously. At the Leicester Square Theatre where the seating is fixed and has hard wooden edges it's a bit trickier.

I had to do some cajoling to persuade people to gather at the front and to begin with they were just grinning at me in a Yeah!-As-if-you're-really-going-to-do-that kind of a way. I was. And I did.

But the best thing was that I got my song out of the way early and could then relax and watch the show properly. I think a big part of the show's appeal is in watching performers step out of their comfort zone.

Highlights for me were Laurence & Gus's performance of Youssou N'Dour and Neneh Cherry's 7 Seconds, Simon Amstell doing Enrique Iglesias's Hero Tony Gardner doing Wheatus's Teenage Dirtbag and two punters whose names escape me - and who didn't know each other - doing an amazingly spirited version Stan by Eminem and Dido.

But if you've never been to a Karaoke Circus show before there's a lot more to it than that. My radio colleagues - Martin and Danielle - really do put on a fab show and they've created a show that incubates a supportive atmosphere for everyone who takes part. It is karaoke without cynicism and with dollops of silly. It is a good thing.
Posted by Dave Gorman at 7:25 PM

I think it was my friend Val who was singing Stan. She enjoyed the night!