Making Genius for the wireless has largely involved a team of 6 or 7 people. For the tellybox Team Genius expanded rapidly. Suddenly we had production accountants, production coordinators, production managers, an art-department, a set-designer, a director, an executive producer or two (or three) and so on. These are all jobs that needed doing and they were all done by people that were naturally welcomed into the bosom of Team Genius. 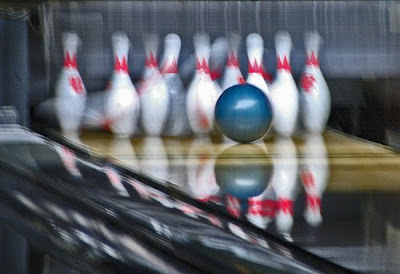 With so many new people involved we decided early on in the production to have a night out as a bonding exercise. This was when our work was largely office-based and before we started recording the shows; before the whole working into the early hours schedule really kicked in.

So Team Genius went for a night of fun and frolics. And competitive bowling. Fun was had by all. Luckily - and I really was lucky - I won. As a reward, I was allowed to host the show. It could all have been so different; Gemma (Team Genius, Non-Bearded Division) came a very close second.

Anyway... when the series ended we wanted to have a wrap party and because various members of TG were working on other projects we had to wait until this last Friday to do it. Now that we'd been in the studio, membership of Team Genius had swelled further still as there are people who only join a production at that nuts and bolts stage. Opinions were canvassed but there was no real debate. Bowling had somehow become the official sport of Team Genius. So a second Team Genius Bowlarama was arranged.

Of course this put the pressure on me. I knew that my job was on the line. Winner = host. It's as simple as that. In the first game of Bowlarama II, Gemma (TGNBD) equalled my score but we were both left in the shade by a fine game-winning performance from Paul (TGNBD(WTF)). I knew that in the second game I had to step it up. Not only did I need to win, if I wanted to continue hosting Genius I needed to do it with a score higher than Paul's first-game-winning total.

It was a close call. It was difficult to keep track because Team Genius were spread over three lanes. It wasn't just Gemma (TGNBD) and Paul (TGNBD(WTF)) I had to worry about... a newly competitive Alison (TGNBD) was bowling well also... with her and Paul ahead of me for most of the game.

With two frames to go I was in deep trouble. If either Paul or Alison hit strikes I was out of it. And I needed not one, but two consecutive strikes to put me back in contention. I love hosting Genius. I couldn't let someone steal my job from under my nose. I dug deep. Strike. Strike.

My job is safe ladies and gentlemen... I, Dave Gorman (TGBD), am the Two-time, Team Genius Bowlarama Champeen. Get in.
Posted by Dave Gorman at 10:24 AM

ongrats to the Champeen (I love that word!)... good work, Dave.

Genius wouldn't be the same without you!

What do you expect, playing a bunch of lily-livered NBDers?

I've bought your last couple of books, and thought they were really funny, but didn't think the DVD would be worth buying as its a lot of the same material.

But .. then I saw some of the stuff from your googlewhack adventure thing on youtube and it had me in hysterics.

I know it violates copyright and all, but youtube only has a few short 5 minute clips, and maybe you should embed them in your site as samplers, or include them in your blog. It might convince people to buy the full DVD.

Dave
Read 'Get in' on this blog - and immediately brought back a memory to seeing you do your 'Get in' with accompanying fist-pump at the Powerhouse in New Farm, Brisbane a few years back for your Googlewhack tour (and DVD).
Thanks for bringing a smile to la dial on this fine Brisbane morning.
Take care and congrats on the Genius TV series. Hopefully I'll be able to get hold of this on dvd to go with the radio series cds
Damo

Word up or not dave?
hey wondered if you showed your face at a small books fair this weekend just gone? if not there is such thing as pod-people and aliens picked up the satellite transmission of 'Are you Dave Gorman?' and unleashed the idea they had been playing around with for years and i have now witnessed the first of their experiment, its a whole new world in the making...

The winner over 2 games is not the highest score, but the highest score taken from the average of the 2 games. Everybody knows this. Presumably, by this method you lost, so changed the rules. Cheat. Cheating Gorman. Naughty boy. Loves his small victories. Small man Gorman