I'll Be Right Back After This Commercial Break 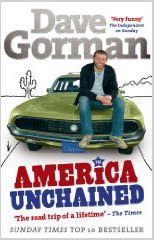 This is published today. You can, ahem, buy it, if you, ahem, like.

It's a new edition. Some typos have been fixed but essentially it's the same words (and photos) but with a new cover and a friendlier price.

I've never had my name in shiny foil type stuff before. It's the publishing equivalent of having your name in lights.

I'm on Richard & Judy later today promoting it and I'm doing some readings in Bristol, Birmingham, Newcastle and Lincoln soon. (All of which are in parts of the country I didn't manage to get to for a reading when the first edition came out.) See the live dates page for details.

Mind you... the publication date appears to mean very little these days. I saw the book on display in a shop last week and have received a few e-mails from people who've already bought this edition. One of them (and I'm paraphrasing) said, "Hey Dave... I bought your new book... but felt a bit foolish when I discovered there was a DVD available. Oh well."

I don't know how I'm supposed to react to this. Other than chuckling to myself at the implicit laziness... or the idea that a moving picture is inherently better than some words on a page. It honestly never occurred to me that anyone would think the film and the book were in anyway equivalent. (Which is short sighted of me because they're about the same thing, right?) I guess because I know how different the two are I just didn't stop to think how it might appear from the outside looking in.

I'm proud of them both and if it were a narrative fiction then I'd understand the idea of equivalence because when you make a film of a book, you try to convey the essence of the book on screen. But that's not what was going on here. I was making a journey, not a film. If we were dramatising the book, we'd include the scene where the police ran us out of town and the bit where someone pointed a gun at us and the bit where we... oh, you get the idea and I'm rapidly disappearing up my own fundament.

In other news, I discovered the existence of a Grindcore (?) duo called Sandpaper Condom this morning. Truly. Sadly, not being British, they have probably never heard of Dick Emery.
Posted by Dave Gorman at 10:03 AM

Are there plans to do an audio book version Dave? Would be great to listen to it in my car, maybe you could read it ;)

I was asked but they'd have to cut it down to a third of the size so I said no. If it's a long journey, maybe I could just sit in the passenger seat and read it to you... but I warn you, I'm not cheap.

Hmmm well you'd have to be in my car to and from Uni on a Monday and a Thursday...I guess I could sort out the glove box and you could just live in there till the book is over? Like my own little Pocket Gorman :D

Surely you can fight with them to do it unabridged?? Or release it yourself!!

I saw the film on E4 first and then went and bought the book. Found them complimentary of one another. You should come over to Dublin and do a reading sometime.

Sandpaper Condom has to be the best name for a grindcore band ever. fact.

Our book group are going to read American Unchained next month. And then we'll all gather to eat and watch the dvd. And then chat about the differences, and how we'd hadn't imagined that chap to look like that, and we were sure that was much smaller. That sort of thing.

Dave, if you could pop over and do a little Q&A as well, it'd be a pretty complete AU* experience.

(* your name really should have been written in shiny gold lettering.)

Hey there, I read America Unchained last weekend and loved it - i embarrassed myself several times on the Barcelona metro sniggering. Can't wait to see the series. Any plans to visit Dublin to promote the book or DVD?

"And then we'll all gather to eat and watch the dvd."

I wonder if your Richard & Judy show is available to watch on one of these new online TV things. I'll take a look.

Of all the things you've done where there has been a book and a screen version, I always prefer the books. The screen versions are great too, but I love the level of detail you can get in print, with basically as much time to tell the story as you like which just isn't feasible on screen.

I read the book in the summer and caught the film on TV recently.

The film was a by-product and after reading the book, it felt like it. To do the book justice, the film would need to have been a six-part series which would have filled in the gaps.

It was good to see the people and places in the film, but for me, the book was the essential tool for telling the thoroughly entertaining story.