A Lucky Boy With A Lovely New Toy

When I talk to people about the tour I meet one of two reactions. Some people assume that the whole thing is planned in infinite detail that I have a team of doctors lined up and advising me and that I have an Olympics style fitness regime all laid out. Other people assume I'm an idiot who's done nothing.

The second lot are far nearer the truth. I cycle when I can. I haven't planned a single route. I figure it will all sort itself out when the time comes because... well, because it'll bloody well have to.

Some of the people who assume I'm an idiot have been brilliant in offering me advice and assistance. One of those people is someone I'm more than a little in awe of.

I'm an incredibly lucky man. The tour came up in conversation when I was a guest on Something For The Weekend the other day. Sitting at home watching the show was a cycling legend: Chris Boardman. He won an Olympic gold medal in 1992 - at the time, Britain's first cycling gold for 72 years - he's worn the yellow jersey on the Tour de France a few times and he's set a few world records in his time, too! 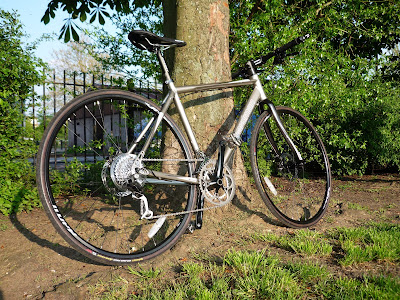 He got in touch with me that afternoon - y'see, I do read my e-mails - to say he'd offer me a bike. I spoke to him a day or two later - me, on the phone, chatting away to Chris bloody Boardman! - and he was, unsurprisingly, a lovely, funny fella.

Y'know how Britain were ridiculously dominant in the velodrome at the Beijing Olympics? Guess who led the Reasearch & Development team for GB Cycling? Him! What am I supposed to say when someone like that offers me a bike? I mean, I'm not likely to be approached by anyone more knowledgeable am I? Even back in the day he was always more than just a cyclist - he was always involved in bike design.

So I said, yes. Obviously.

And this morning I picked up my new toy. It's so much lighter than my regular bike. I intend to get some miles done on it this week. I'm very, very excited.

Chris is running the London marathon this year. Which is very silly of him because there's no free-wheeling when you run. But apparently he enjoys it. He's doing it for the National Autistic Society. If you want to sponsor him, looky here: www.justgiving.com/chrisboardman

Before my tour, I'm going to be cycling the London to Brighton ride in aid of the British Heart Foundation. If everything goes according to plan, this is the bike that'll take me there. (And back.) If you'd like to sponsor me, looky here: www.justgiving.com/dgorman
Posted by Dave Gorman at 6:29 PM

That seat looks like it'd split you in half!

My genius idea: Ask him on as a guest for the next series of Genius.

In fact will your 'new car' be going with you? I assume you've planned whether it's going in infinite detail, or perhaps you haven't and rather idiotically done nothing.

I'm not sure which but I'm guessing it's one or the other...

Wow, that is an incredible present!

You'll have to post a review of the bike and its features, for some reason I'm half expecting this to be some sort of 'Bat-Bike' with some kind of gadget which prevents you from getting knackered... I mean, why else would you need an RnD team?!

Is that a generator hub at the back?

I'm not a speed merchant, though. I did home to Brighton last week, 87km, took about 6 hours.

@Murk: I thought at first that it might be a Rohloff transmission, but when clicking on the photograph I notices that the casette and the disc brake are the same size so they appear to be a big honker of a hub. Look closer and you will notice the derailleur...

Is that back wheel taken from a penny farthing or is that just a trick of perspective? You'll be there in one rotation! Which is handy. Also, if you fancy pimping it out may I suggest those little multi-coloured rattly things you used to get in cereal boxes. Nothing says class like a persistent rainbow coloured noise source. That's why the musical Joseph was so popular.

@sheady: the seat feels pretty comfortable as it goes. I'll have some padded clobber for the long days in the saddle mind you.

@dwez: the new car doesn't fit on the back although I could fit the nubbin on the back of the bike if I wanted it to. But I'm not getting rid of my old bike so there's no need. And no, the trailer won't be coming on tour with me.

@Ross Johnson: I don't know enough about bikes to be able to write a proper review. It's much lighter than I'm used to, which is great. It's, um, really nice. See?

@Murk: I don't understand the question and thought you were probably joking but Andreas seems to have answered it for you. Yeah... notice the derailleur?

@John Kerrison: The only pimping will be of the practical variety. Need to add luggage rack for panniers etc. It's a shame in a way - but I have to be practical about it.

Just sponsered Chris. My daughter has Asperger's syndrome so obviously his cause is very close to my heart! I didn't realise that he was raising money and awareness for autism so thanks for letting me know.

I will sponser you next week.

It would be better if I could actually spell the word sponsor wouldn't it? Oh well, at least I was consistant!

What a vision of lightweight loveliness. Shame you're going to have to spoil it with mudguards and such, but as you say, got to be practical.

Oh... no mudguards will be needed. I'll take the weather. But a rack will need to go on the back so that I can carry luggage. I think whatever lock(s) I go with will end up weighing more than the bike which is a shame. Necessary though.

So, you're carrying all of your own luggage? I had an idea that you'd have someone running ahead with a car getting your gear from hotel to hotel? What about your gig gear?

A derailleur doesn't discount something 'interesting' with the hub. On my touring bike I have a rear derailleur and hub gears (instead of front derailleur).

Although.... obviously the answer is 'nothing interesting going on there' :)

@Anonymous: I don't think I'll be carrying all my own luggage. There's going to have to be a tour-manager working on the show so I might get a bit David Cameron about that stuff.

But I might take the stuff I need to do the ride and not the gigs - on the grounds that it was originally just going to be a bike ride but has mutated into a tour.

But either way... I can't do it with zero luggage. Not going to have a car fifty yards in front all the way. Will be off by myself for long stretches.

Tip of the day:

When propping your bike against, say, a tree, lean it on the back wheel or saddle. this way it can't move and won't take the paint off your top tube!

Chris B
(First ever blog)