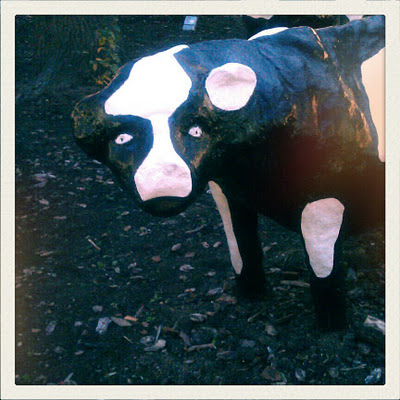 I had no idea how controversial this series of photos was going to be. It started out as an idle way of announcing my presence to people on twitter. I wasn't intending to do it for every town on the tour... but after having done a few, people started tweeting me to say that they were looking forward to seeing what picture I tweeted from their town and so on. So I've felt a teeny obligation to keep it up.

When I posted my Dorking picture - it's of a statue that stands outside the venue - loads of people got in touch to say that they were disappointed it wasn't a picture of the giant metal cock(erel) that stands on a nearby roundabout. Apparently that would have been "more Dorking".

And when I posted the picture from Brighton again there were people telling me that it wasn't "Brighton enough" for them... they wanted it to be a picture of a pier or something else more iconic and Brightonian... when in truth they're just pictures of things I see - rather than things I go out of my way to find. If the day is a rush the picture will be of something I pass on my walk from the train station to the venue... there isn't always time for a wander around town.

Still... as I walked from the station in Milton Keynes this was in my mind. I would try to give people what they want and find a picture of something more iconic and Miltony Keynesy. It was dusk. Camera phones don't operate well in dusk so the airportesque architecture was out of the question. But the walk took me through the shopping centre where the replica concrete cows reside... hence the photo.

A few yards away the fantastic Waterstones book shop (I've done a couple of lovely readings there) had a huge model of a cow on display too. They were selling miniature replica concrete cows alongside a selection of I Love MK t-shirts. Like it or lump it, the concrete cows are a symbol of Milton Keynes. Just the job.

I posted the photo. The usual flurry of return "Hellos" came from happy locals... but one man was less than happy about it. I won't reveal his username because that always encourages people to run off and get involved and that can quickly become a form of bullying for which there is no need. Besides, my reaction was to laugh.

Because in return for me posting the innocuous picture of a concrete cow that you see above, one person replied as follows:

Or rather, as unfollows. I love the idea that someone loves Milton Keynes so much that they assume everyone else is mocking it constantly. To decide that a picture of a concrete cow is automatically a slight on that great city is... um... well, a touch over-sensitive, no? (If he'd read my latest book, he'd know that I really like Milton Keynes and devoted quite a few paragraphs to eulogising the place).

But even if I had tweeted some dastardly insult to the place, the reaction would surely still be over the top. The people who tweet that they are unfollowing always make me giggle. It's the same pomposity that fuels what I do with the Found Poetry... it's sort of supposes that I am on twitter for the sole purpose of amassing followers, that I crave the indulgence of that particular individual and that I will be upset when they decide to leave. It's easy to follow someone and easy to unfollow them too. You just click a button. There's no ticket price. Announcing that you're unfollowing is like slamming a door as you leave... only on twitter it's a revolving door and they don't slam very well.

I explained to them that I like Milton Keynes and that I found it ridiculously pompous of them to behave that way. It seems to me that when Outraged-Of-Milton-Keynes decides to announce his outrage at an insult-that-doesn't-exist all it proves, really, is that Outraged-of-Milton-Keynes is a bit of an oversensitive numpty. And anyone who tells someone that didn't ask them to follow them that they're unfollowing them just seems overblown on self-importance.

Which surprised me because I can't see the positive viewpoint in that first tweet. I don't think calling someone a "massive twat" is a really positive thing to do. It seems a bit aggressive to me. Even if it's motivated by a love for his home town the assumption that a picture of that home town is automatically an insult is, well... a little negative, really.

There's something about the idea that it was 'public' too that I find odd. As if his tweets to me aren't public but mine to him are. I didn't try to shame him at all... and I didn't criticise him for being positive. I criticised him for his lack of manners. And pomposity. I mean, really, if you think it's okay to call someone a massive twat in public... you kind of have to expect them to respond. Especially when you're motivation for the name-calling is so... um... non-existent.

But my life it's put the pressure on for my visit to Guildford tonight... will I take a photo? Will it offend people? Gulp. Let's see.
Posted by Dave Gorman at 2:38 PM

Email ThisBlogThis!Share to TwitterShare to FacebookShare to Pinterest
Labels: HelloPhotos

Having grown up in Cambridge, I had to smile when I saw the picture of Our Lady and English Martyrs church from your time in that city the other day. With all the attention given to King's College, etc, it was nice to see one of the lesser recognised landmarks picked out. :)

Seriously looking forward to seeing you in Bristol on the 12th!

Don't reactions like that leave you wondering why you bother?

Having said that I, for one, am glad you do.

So that's why you didn't take a photo of the pier at Southend; because it's a bit of a walk from the Cliffs Pavilion! Ha! And I thought you were deliberately avoiding the cliche!

Wow. I love our Concrete Cows and thanks for posting a picture of them. Please ignore our Trolls.

I'd rather see photos of things I haven't seen before.

... mmm, yep, that sure is Brighton Pier. Looking the same as it did with my eyes. It's good that everyone sees the exact same things that I see...

Can we put requests in for the gigs we're going to? For Oxford next Tuesday, I'd like a photo of a face in something, so I can go and find it when I'm wandering around. Thanks.

I'm liking your blog a lot, there a few satirical town based blogs which have great mileage on a quiet weekend! Don't suppose you checked out Milton Keynes Theatre?