It seems a lot of people were left frustrated by my last post... with many of you accusing me of posting clickbait... sometimes in jest, and sometimes, maybe not in jest. It's hard to know at times.

But the post was called "Free Tickets" for a reason and I promise you it wasn't to bait you into reading a blogpost that was no longer of any use to you. It's not as if I get any benefit from clicks after all. I titled it "free tickets" because, um, well, because the post was about free tickets and it did offer advice on how to get some.

It's not as if it's the first time I've blogged about the mailing list: In September last year, I wrote explaining that series 4 & 5 had been commissioned and that my mailing list would - as usual - get first dibs on tickets. And I'd done much the same in advance of series 3 too.

Of course I have no expectation that anyone slavishly follows everything I ever post. I will have tweeted links to those posts at the time and they will have automatically become facebook statuses and so on... and you might or might not have caught them. But isn't that really the point? That's why a mailing list is useful. It means that information is sent to you when it's relevant rather than if-you-happen-to-catch-it. Being on someone's mailing list isn't about following them more closely... it's about not having to make an effort and still finding out about stuff. That's better. Isn't it? 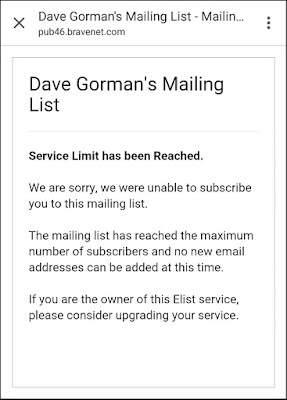 What added to some people's frustration was that many of those who tried to sign up to the mailing list just got this message telling them that the list was full in return. Sorry about that.

I pay to run the mailing list and I had no idea that I was approaching an upper limit for my rate. I had no idea because, based on previous experience, I wasn't.

The numbers tend to creep up at a gentle pace with little blips every now and then as and when I blog something reminding people it exists.

What doesn't normally happen is having a few thousand people sign up in the space of two or three hours. Which is what happened yesterday. It caught me on the hop.

As soon as I realised I paid to expand the service... so you shouldn't have a problem signing up now.

I mean, only if you want to, obviously...

So THIS is the system the voting registration system runs on!

Tried to join the list. Said I needed to click on button to confirm & I would be sent an email. Did this and it broke my internet connection. And still no email. Sad times indeed...

@Anonymous: there's absolutely no reason why clicking that button would have any impact on your internet connection. If you've signed up you will have been sent an email. If you haven't received one, it means either a) you didn't click the button (maybe your internet connection was lost?) or b) it's in your junk folder or has otherwise not been delivered by your mail server. But unless you get that email and confirm that you have indeed chosen to sign up, you won't be on the list. If I didn't operate it that way, anyone could add any address whether they wanted to be on the list or not... and then I could be accused of being a spammer. As it is, I only send emails to people who want to receive them... and I know that's the case, because the person who controls the email address has to confirm that they want to be on the list!

If it's not in your junk folder, ask your mail provider where it might be and whitelist my email address to ensure it gets through!

Any idea how much each show gets over-subscribed by?