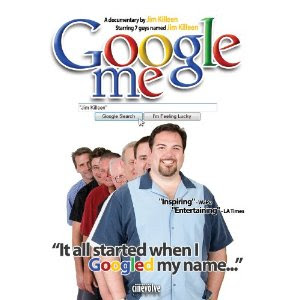 Given the amount of e-mail I'm getting about Jim Killeen and his movie - Google Me - I think it's probably worth me writing a few words here about it. If nothing else, it'll give me something to point people towards instead of typing out the same old reply over and over.

So, here's the thing... Jim Killeen's film is a documentary about him googling his name and then trying to meet and interview other Jim Killeens. I don't know much more than that. I haven't seen the film.

But my inbox suggests that a lot of people are getting a bit angry on my behalf. Most of them ask if I've seen it, if I've contacted lawyers, if I'm suing him or any other variations on that theme.

It's kind of flattering that people feel, um, kind of protective towards me and I really do appreciate that people are looking out for me but my attitude is that it really doesn't matter. In fact, I don't even think it's all that similar to things I've done. I suspect in most cases people are conflating two of my previous projects and getting themselves a little confused.

For those who are unfamiliar with my past - and I never expect anyone to know my cv inside out and backwards - many years ago I went looking for 54 of my namesakes. But I doubt very much that I'm the first person to have done something involving namesakes and I was certainly never going to be the last. But not having seen Jim's movie I can't say that there's any other similarity. I don't think there is.

As hard as it is to remember a pre-Google world, Google hasn't always existed and even when it did exist it didn't immediately become the go-to resource it is today. If it had been my search would never have happened. If you've seen the show or read the book and if you enjoyed what you found there, the chances are that what you enjoyed was the unfolding of the story. It wasn't really about finding out what Dave Gormans were like or what affect a name might have on someone or any of that it was about how one event led to another. We didn't set out on day 1 to meet 54 Dave Gormans. We set out to meet one. And something he said led us to meet another. And something he said led us to...
You get the idea.

Now, imagine a world of smart phones and Google. I'm in the pub. I mention to my friend that I'd heard the Assistant Manager of East Fife was called Dave Gorman. He doesn't believe me. Instead of the conversation leading us to board a train bound for Scotland, one of us would have whipped out a phone and used Google to prove a point. And that would have been that.

This is the reason that I turned down offers to do a sequel. We didn't meet my namesakes in order to make a TV show. We made a TV series out of stuff that had happened. There's an important distinction. But a second series never made any sense to me because it could never have been a genuine and authentic story. We'd have had the resources of a TV company on our side. We'd have been able to find a whole series worth of namesakes in advance of filming any of it. Then we'd have been able to plot the best journey between them. So where would the story be? And what would we be doing it for? To make a sequel? What kind of motivation is that? It just doesn't make any sense to me as an idea because it would inevitably involve having to manufacture pretend hardships and that would be an insult to the genuine tale I'm so proud of.

I'm not suggesting that googling people and going to meet them is a redundant exercise per se, just that it's not what I did. Nor would it have made sense (to me) to do a second series under such different circumstances because it would have to have been either a completely different type of show or just a manufactured - and therefore, somehow dishonest - piece of work.

(That and I had a spidey-sense that I didn't want to paint myself into a corner as the wacky-namesake guy... something I wrote about in a round about way when the DVD of Are You Dave Gorman? was released a while ago.)

The other story I've told that people seem to conflate with it is Googlewhack Adventure. I'm not surprised by this. I've got used to meeting people who've never seen any of my stuff but think they know what I've done because they've read this or that in the press etc. (And I'm sure I do the same about other people all the time) On many occasions I've met people who sort of know that I once met some namesakes or something and also know that I did something with Google in the title and they, just, well, they just assume they're the same thing because it sort of makes sense. And I guess it does. Sort of.

But Googlewhack Adventure's got nothing to do with it. Again it's not really a story about an internet word game. It's another story about how one thing leads to another; about a chain of events - about a breakdown. And one of the things that precipitated it was my frustration at the cartoonish wacky-namesake-hunter people assumed me to be. I turned down the Are You Dave Gorman? sequels and the merchandise and so on for - what I think were - healthy reasons. A less healthy part of my make-up reacted to the same pressure to be that guy in a different way and, eventually, Googlewhack Adventure was the result.

So genuinely, Jim's project doesn't seem to me to be all that similar. If I catch it one day I'll let you know if I still think that. It's a film I'd never have made but that doesn't mean it's a film that nobody should make. It might be brilliant. I hope it is.

Either way, there's no value in wasting energy in getting upset. The next thing is always more exciting than the past.

Nonetheless I am disappointed to see "facts" get in the way of a good old-fashioned self-sustaining viral internet witch hunt, particularly one where people can unreasonably het up about Yanks the allegedly doing something or other.


More to my shame, I now reckon I was particularly fired up by the publicity shot of Jim Killeen playing smug pocket billiards in his beige slacks and bowling shirt looking like some megamix of US blue collar domestic laff-track sit-com fathers (King of Queens, everybody loves Raymond, Dan from Rosanne). And, the more I think about it, that's just downright unpleasant on my part. I'll rewatch Googlewhack as penance.

Didn't Frank Skinner do a Stand Up Live dvd?

I've got to tell him about this copyright Dave Gorman bloke!! ;-)

Dave, I was going to leave comments about how articulate, adult and thoughtful you are, and how I strive to be able to treat life the way you do, but I feel that that would come across as simpering and sycophantic.

I like your liberal attitude, not everyone is an info shark.

talking about DVD's any chance of getting yours on BlinkBox? it's an online service from buying and storing movies, in the US they have NetFlix, but not here in the UK.

i got sick of 'one download' iTunes and found them (BlinkBox) check it out yourself :) recommended!

@Dava thanks, but I don't think I've got a particularly liberal attitude (or at least I don't think this is evidence of it). I just don't think the things are connected. I don't own the idea of having google in the title of something (and there's no other connection between JK's film and Googlewhack) and I don't think for one minute I was the first person to meet my namesakes. His film and my projects are different. I don't have to be liberal to think that, just honest.

To think that he's in some way ripping me off one has to misrepresent what I did (and why I did it)... and then assume that JKs done it too. It's incorrect even before you get to considering his film because it involves getting what I did wrong in the first place.

@Dava: oh and as to blinkbox, I don't know what it is but I would think the chances of getting my stuff there is slim. Different DVDs have been released through different people so I don't know for sure... but I doubt it.

Having slept on it (and having realised there I have neither an edit option to fix the typo or a delete option to erase my past rash postings) I've done something positive this morning:

I've added a "Namesake Cataloguing" section to the wikipedia "Namesake" page, listing both Dave and Jim (in date order *ahem*), hopefully highlighting both similarities and differences in the two projects.

With a bit of luck, other examples will follow. It's on wikipedia, so it's now a fact.

Quote "The next thing is always more exciting than the past."

I've found that to be the best policy. Sometimes I have an idea and think I'll save it for a future project when it'll be really relevant. Then I think I should use it now and have some faith in myself that later I'll come up with something new and fresh.