The two songs I brought in from home were:

Calamity Song by The Decemberists:

The Decemberists- Calamity Song by MMMusic

I've been a fan of The Decemberists for years, but my second choice was a far more recent discovery. It was Kill You by The Severed Limb. There's little in that song-title/band-name combination to suggest skiffle... but that's what it is, and it's ace.
Kill You - The Severed Limb by SeriousTypes
First I'm gonna kill you, then I'm gonna bill you the price of the bullet. That's a fine lyric, right there.

The show also featured an interview with Daniel Radcliffe who picked a track of his own too. It was Zorbing by Stornoway - a fine choice indeed. In fact, many moons ago, it too was one of my songs-I've-brought-in-from-home.
Stornoway - Zorbing by underhisempire2


The interview was filmed and there are a series of videos from it on the Absolute Radio website, here if you fancy it.

Of course that - and all the other nonsense, Found Poetry, Ward's Weekly Word, Martin's Song, The Pun Street Planning Committee and Listener's Lexicon are all in the podcast, which you can get from itunes here, or, if itunes isn't your bag, from here.

After the show was done I had to high tail it to the train station so that I could head to Doncaster for the final night of the Doncaster Comedy Festival. It had been a while since I'd done the show but it was amazing how easily the tour team of me, Kumar and Jay Foreman (I'm still the only act touring with a rhyming support act) slipped back into our normal pre-show dynamic. It was a lovely show.

And I didn't forget to revive the Hello-photo tradition. 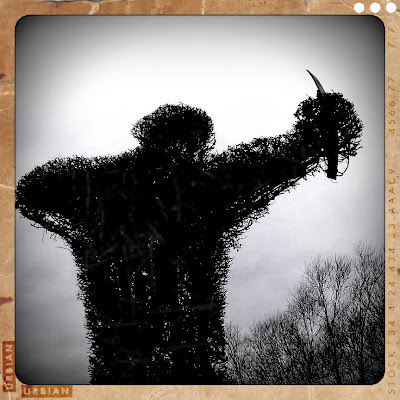 This show fell outside the usual tour because of the festival. The next live dates will be at the end of March, when I'll be doing two warm-up shows in Newbury and one in Chelmsford before the four night run in London at the start of April. Come along!