Two big things happened today. I completed my thousandth mile of the ride... and I crossed the border into Scotland.

My Human Sat Nav for the day was Margaret... 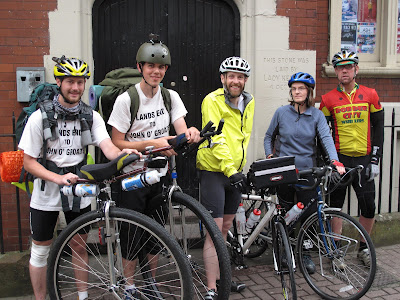 She's the one in the blue. There are a few other characters here... allow me to explain...
On the left of the picture you can see Adam and Max... two lads who are attempting to ride from Land's End to John O'Groats. On unicycles. (You can read about their trip on their site, here, and donate to their charities here, or here.) They realised that their end to end journey was likely to coincide with my four-corners journey in Carlisle and asked if they could join us for the start of today's ride.

The next new character is between my legs. It's a new bike. I still can't believe that Chris Boardman cycled with me yesterday... and the gift of another new bike is quite ridiculously generous on his part. Top bloke.

Of course I'd made several adjustments to the first bike... adding pedals I could clip into, a new stem that raised the height of the bars, a new saddle designed more for touring, a rear pannier rack and - most important for me - ergonomic handgrips. All of these things had to be switched on to the new bike. Which explains the appearance of the other new character, the man on the end; Howard. When Chris B arranged for a new bike to be waiting for me in Carlisle he also arranged for one of his top mechanics to be there to take the old bike, remove the components and switch them over. That's Howard.

So dedicated is he that, having made the changes, he then wanted to ensure there were no problems with any of it when it was first used... so he volunteered to accompany us on our way out of the city. We made for quite a ridiculous convoy as we pedalled our way out of Carlisle together.

Max and Adam weren't going to go very far with us because they're on a different route. While I need to stay west in order to head to the most westerly point - Ardnamurchan - they're just heading for John O'Groats and wanted to go through Edinburgh rather than Glasgow. 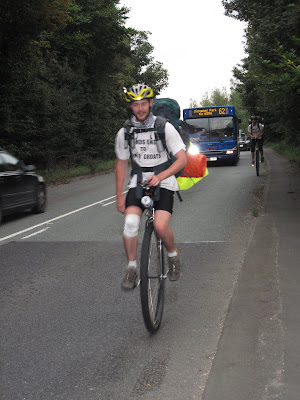 It's hard to explain quite how ridiculous Max and Adam's task is. Unicycling is ridiculous. They can't freewheel - so going downhill is hard work - and stopping appears to be impossible which makes traffic lights, um, dangerous. Add to this the fact that they've taken loads of traffic-heavy, major A Roads and it's hard to work ot how come they're still alive. My Human Sat Navs have expertly guided me away from all the major roads keeping most of my route relatively traffic free. Adam and Max have unicycled roughly 500 miles and I reckon they'll have seen 20 times as many cars as I have in my 1000+

Anyway... they peeled off o to their route and we continued on our way... but instead of reducing our numbers to three - we became four because by this time we'd been joined by one of Howard's friends. Pete. I think. 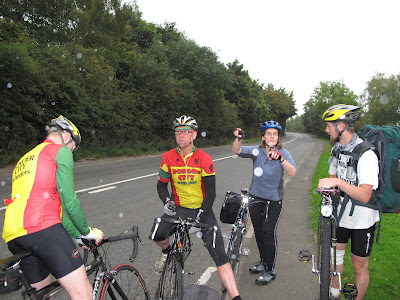 We passed through the Scottish border: 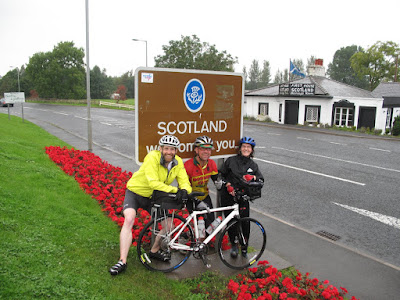 And then Howard and Pete(?) peeled off leaving Margaret and myself to have a brief look at Gretna Green (no, we didn't) before continuing our journey north and west.

I've had so much good fortune with the weather so I really can't complain about the grey skies and brief showers that came today. It might not have shown the landscape off at its best but we were never drenched.

We took a little detour to take in a nice stretch of coastline... 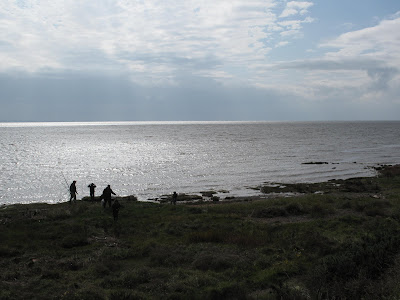 ...and another to visit a castle 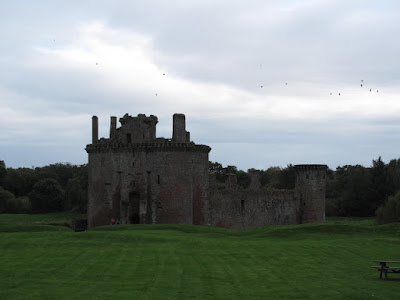 Here we are at the finishing line: 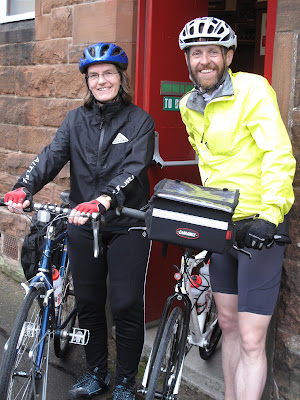 Here's the route we took...

1027 miles done. 21 shows done. A beautiful venue too... the Brigend Theatre... which is even smaller than Threlkeld Village Hall... 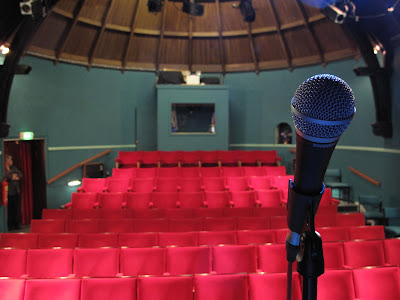 (I took this before the show... there were people in the seats later)
Posted by Dave Gorman at 12:08 AM

I've always fancied a go on a unicycle but would end up on my head in about 2 seconds flat. Congrats on the 1000th mile.

Congrats on your first 1000 miles! The route from Carlisle to Dumfries matches the route I took over a year ago. Nice place, especially when the weather is nice. Thankfully the part between Bretna and Bankend was dry.

Have fun with the next 1000 miles and have a good trip to Dunnet Head, It's pretty amazing.

Wow! Congrats on your 1st 1000 miles. It doesn't seem that long ago since we were waving you off from The Lizard peninsula!

Good luck with the rest of your journey!

A Unicycle? That sounds insane! The thought of you, Chris Boardman and two blokes riding unicycles is making me laugh, what a funny world.

Congratulations on your first thousand miles, and keep up with the photography, they are amazing.

Keep going - it's an amazing achievement, as well as being completely insane!
Kirstie

Any any point when you were watching Chris Boardman get his gold medal on his fancy new bike back in 1992 did you think "yeah, I'll definitely be doing a little cycle ride with him in the future."

Hey Dave, it's the unicyclists here,

Hope your trip is going better, we read about your punctures and weather :-s

We have arrived in Dundee now and are having a brief rest in the library here. It'd be good to ride with you again (perhaps without bags so that we could keep up!)