No internet access yesterday... so here's two day's worth:
Here's my Human Sat Nav for Day 31; Nigel. He showed me an ace route from Inverness to Clashmore. 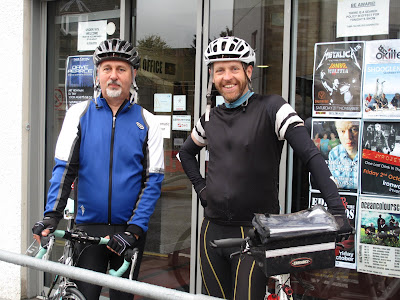 I wish someone had told me the show was in Clashmore before. I was told it was in Dornoch so that's what was on my website. And apparently the phone number I had there was also for a different venue with the same name: Carnegie Hall. Not helpful. Sorry! Still, it was only a couple of miles away and it was the most beautiful village hall I've ever seen... but I'll show you that later.

I'm ever so slightly phobic about suspension bridges - I understand the physics of how they work but I can't help but entertain horrible notions of them failing when I'm on them. I didn't tell Nigel that until after we'd crossed Kessock Bridge because once the person I'm with knows it only makes it worse. I made it across okay. That took us on to the Black Isle where we made a brief stop at the Clootie Well. 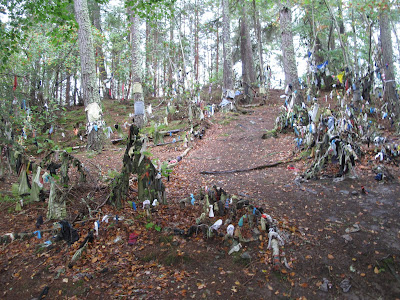 There are hundreds - possibly thousands - of rags tied up on the branches of the surrounding trees here. I gather it's supposed to be a holy spring and the rags are tied as part of a prayer of supplication to help you with some ailment or other.

Nigel's wife had prepared a rag for me... 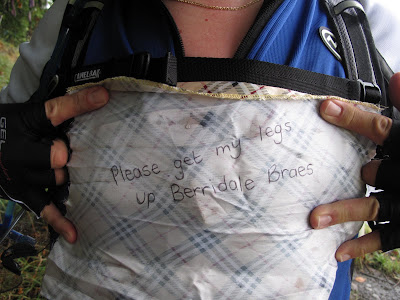 It says, please get my legs up Berridale Braes. I'd never heard of the Clootie Well and I'd only heard of Berridale Braes the night before when several members of the audience warned me about it after the show. It's a big, steep, winding climb that cyclists are supposed to dread. I was - therefore - dreading it... and grateful for the raggy request for help. 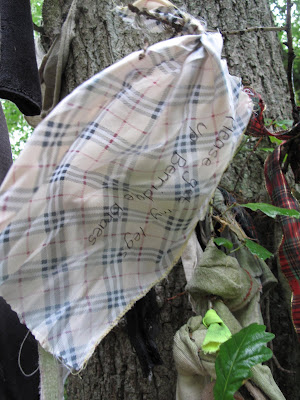 Nigel had one of the classiest tea stops planned for us... he'd parked his car up by the Cromarty Ferry with a proper boss picnic inside: 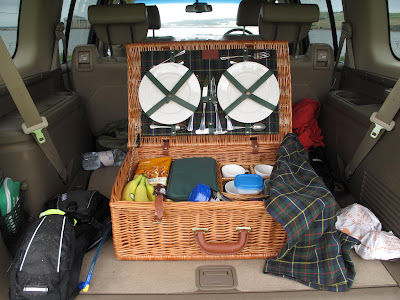 My first taste of the Scottish speciality, a macaroni-cheese-pie: 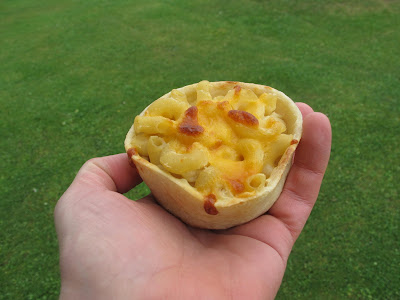 It tastes exactly like cold macaroni cheese in a pie.

This was my third ferry ride of the trip - one across the river Fal, one on to the Ardnamurchan peninsula and now this one on to Nigg. It was the smallest one of the lot. The road sign for a ferry always shows two cars on a boat. This one only takes two cars... 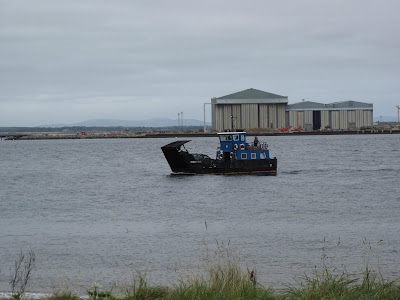 We'd been dealing with rain and a headwind for most of the way to Cromarty so it was relief once we were on Nigg to find the weather clearing up a bit.

The route only had one climb of any scale mind... and we did well to avoid the dastardly A9 for as much as we did.

Although, as we did end up having to contend with it - and all the lorries on it - for the last few miles... 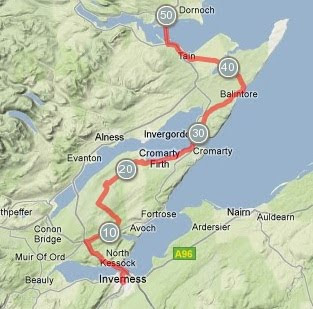 And here's the beautiful Carnegie Hall... it really is beautiful. Like a scale model of a much grander building. 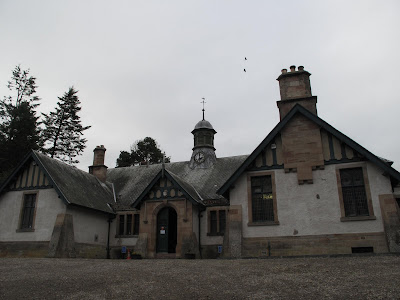 And here we are at the finishing line... 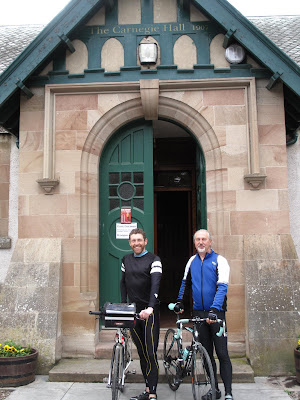 Which is when Nigel said the ominous words to me, "I would love to come with you tomorrow as well but the truth is, I'm not sure I could do it... I'd be a liability."

I slept that night with nightmarish visions of what Berriedale Braes held in store.

One thing the day seemed to have in store was beautiful weather. It was gorgeous when I got to the starting line for the 32nd day: 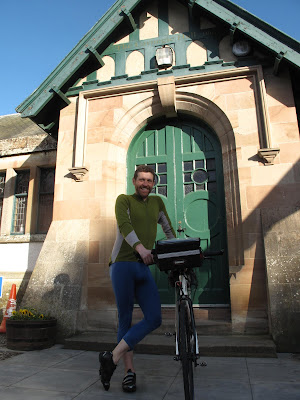 I enjoyed the first half of the ride though... the weather was ace, and the terrain nice. I was glued to the A9 for most of it - apart from a detour through Embo (I think) - but the traffic wasn't too bad and the views were amazing. 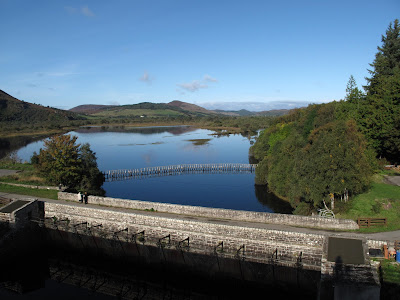 What journey am I on again... 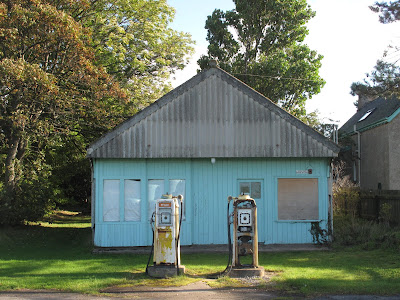 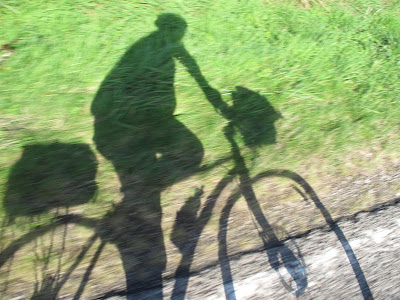 As you can see there were two notable climbs. The first one - Helmsdale is actually the harder of the two - and the second one is the dreaded Berriedale Braes. It's full of hairpin bends and has "escape lanes" full of gravel at the bottom of it... it takes you down and then up... past two graveyards.

But the truth is that I found it very manageable. I didn't end up in my granniest of granny gears and felt fine at the top. 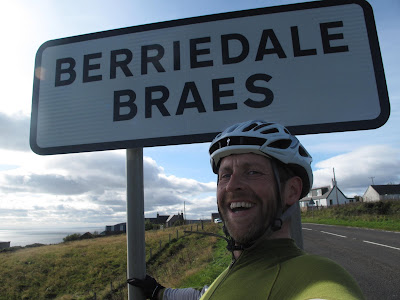 That's either a sign that my fitness has improved... or a real credit to the work of the Clootie Well.

Before the ride I was a bit worried about this one. I'd had the fear put into me about the climbs and knew it was likely to be in the region of 75 miles. But having completed the two ascents I was pleased enough with my progress to make time for a couple of stops. 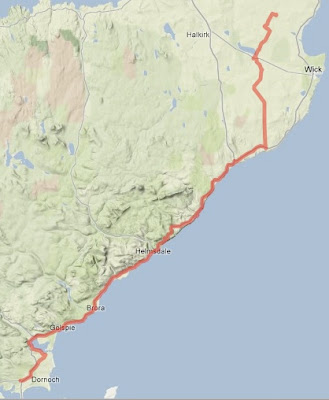 But I might have made a mistake because the weather was going to turn against me. As I cycled along hugging the coast I was constantly getting blown towards the sea so obviously when I made that left turn I inevitably headed into a headwind.

It's a long straight road with no obstruction and the wind was strong... and two miles in the rain came too. That long stretch was far harder than Berriedale Braes. Oh well.

Still, I (and my mismatched outfit) made it in the end: 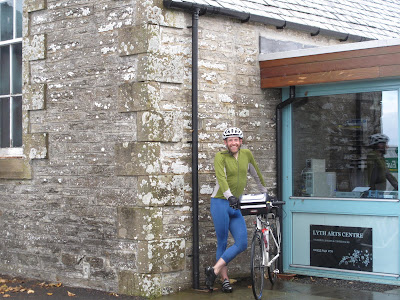 There are fifteen miles to go. So close...
Posted by Dave Gorman at 7:27 PM

hey dave! brilliant show tonight, thanks for the explaination of the evolution of the honey monster. haha:) hope you get good weather tomorrow for the end off your journey xx take care xx

A cold macaroni cheese pie doesn't sound too appealing, although the warm ones you get at football matches don't look as good as that one.

I hope you weren't wearing those tights when you crossed from England to Scotland - I'm pretty sure smuggling budgies across the border is illegal ;)

Really happy that you've always taken the time to post pics and update your blog with your progress. Go on mate, not much further now!

Helmsdale is definitely harder than Berriedale Braes. I don't know what all the fuss is about, personally.

Good luck for your last day (although you will have finished by the time you read this!)
I hope that you are as happy as you feel you ought to be!

Happy happy happy - well, you should be - well done for a fantastic achievement that will stay with you for life! And a night off too...

You gotta love those blue tights!

I'm having a macaroni pie for my tea this evening but mine will be warm.

I popped in to see pictures of a dish. Macaroni cheese pie is it. What a stroke of bakey carby lardy genius. You mention the Clootie Well. Have you heard of the Clootie Dumpling? It is the size of our dog. Now THAT is biking fuel. Get some.

It really is the size of a labrador: