These were the two songs I brought in to my Absolute Radio show this week:

And then, in a completely different vein, but bloomin' lovely all the same, Counting My Fingers by Maz Totterdell:


We spent much of the show discussing stories that could end with the words, "but I was only trying to help..." and, as usual, our listeners had some corkers. If I learned one thing it's never ask a child to feed the goldfish if you're not absolutely sure they know where the fish food is. I was particularly fond of a tweet from Alex Mcaleer who told us that "as a young girl my mother decided it would be nice to light the candles on the Xmas tree for when her parents came home"... if only because it was followed by the perfect final line: "As you can imagine, it went up like a Xmas tree".

We had most of the usual regular features (Danielle's obsession with Michael Fassbender is becoming worrying, mind) but also introduced something new that I think we'll return to every now and then - The Autofill Quiz. 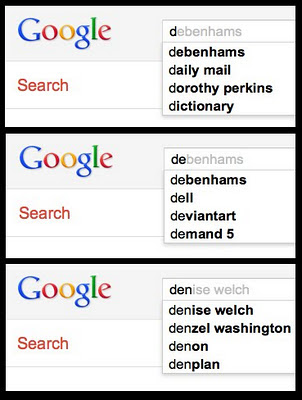 This started because I tried to google the word Dentist on Friday night while being slightly distracted by other things. (Not toothache, as it happens).
I've never really paid much attention to Google's autofill suggestions before. I know it always tries to guess whatever it is you're looking for, I've just never paused to see what those guesses are. But on Friday I did. The first guess when I'd typed in just a 'D' was Debenhams. With an 'e' added it was still Debenhams, obviously,... but when I added the 'n' it became Denise Welch. Google thought it more likely that I was searching for Denise Welch than Denzel Washington. Well, she had just won Celebrity Big Brother. Apparently.

It made google seem like a living, breathing entity. Something that not only tried to finish your sentences for you but changed its guesses according to time and place. It knew I was in the UK, it knew that Denise Welch was arousing unusual levels of curiosity at that time and so it must have adjusted its guess accordingly. (Surely, it wouldn't have offered up the same guess a couple of months ago, would it?)

So I tried typing in some questions and found myself growing interested in the assumptions it was making. Do that many people really want to know if you can adopt an adult? Or yawn in your sleep? It seemed like a nice way of randomly generating 26 questions - questions that, according to google, lots of people must ask. (Can you a... gave me one question, can you b...... gave me another and so on through to can you z...)

And the result was, well, an Autofill Quiz. It made sense at the time. Like I say, I think we'll revisit the idea in the future - changing the start of the question to generate a different quiz - so if you think you might want to be on the show and take part on the phone, then email us here.

The podcast was full of the usual extras - and there's more in the Someday Podcast too. You can get the latest podcast here, or for you non-itunes folks, here.
Posted by Dave Gorman at 3:15 PM 7 comments:

Most weeks on the radio I bring a couple of songs in from home. We always put the details up on the Absolute Radio website but I still get a few emails and tweets asking me what they were so I thought I'd put some information up here as well:

On yesterday's show I played Run Out Of Morning by The Loose Salute:


And For My Record Machine by The Loud:


I really enjoyed the show yesterday. Inspired by a waiter who denied the existence of mint tea to me, despite serving it to people sitting at tables all around me, we started talking about weird dining experiences. There were cafes that serve All Day Breakfasts - but only before 11am - ants in the antipasti and a tweet from Alex Philip about a waiter in a Cornish restaurant who kept tucking the tablecloth into diner's collars for them, y'know... instead of a napkin.

Of course, as well as the main show, we do a load of extras for the podcast. This week we began our efforts to try and end a 10 year old grudge between a man in Bristol and his favourite pizzeria, discussed the things you can see behind a Dutch cafe toilet door and had a busy session in the Pun Street Planning Committee Council Chamber - where Brooklyn Tomato was put forward for Fail Lane (that makes sense when you know what kind of restaurant it is), two wool shops (Woollabulloo and Un-ewes-u-wool) went head to head for the right to take on the incumbent, World of Woolcraft and the coffee shops based in Glasgow's old Tardis style police boxes - Coppuchino - had a go at deposing Brewed Awakening.

Of course there's also the Someday Podcast out later in the week.

If you've got a suggestion for Pun Street send it to us here.

If you've got a suggestion for Listeners Lexicon - or a guess for any of this week's words (comfort, hairdresser, ARSFLY) you can send them here.

So... as well as the extra tour dates for Powerpoint Presentation, we've just added a 4 night run in London.

The shows will be in the Queen Elizabeth Hall at the Southbank Centre. April 2 - 5.

You can get tickets here.

Thanks to everyone who came along to the Pub Olympics recording last night.

But it is silly. And it's a panel show of sorts. The sort that we imagined might be called The Pub Olympics in a world where the Pub Olympics is far more important than that other Olympics you might have heard about.

Anyway... in unrelated events, here's an animated gif of me eating a banana. 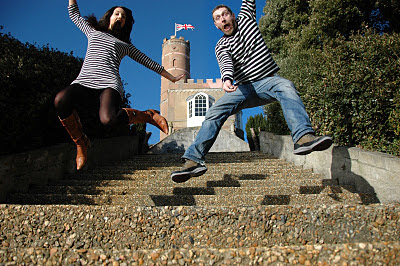 And the radio silence is over. Especially come Sunday. When I'll be being noisy. On the radio.
Posted by Dave Gorman at 12:58 PM 7 comments: