I was in my local supermarket last night. It was that or a takeaway. In my basket were the ingredients for a quick meal (veggie stir fry, since you ask). 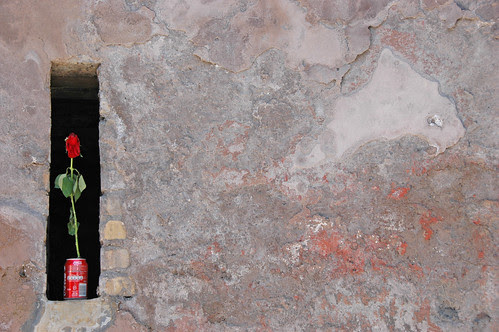 I thought I'd chosen which till to approach wisely - all of my shopping was on the conveyor belt and ready to go - just as the last item of the people in front of me was beeped through. Perfect.

The people in front of me were twins. Identical twins. Their last item through the till had been a two-litre bottle of coke. As was the item before that. And the one before that, too. Pretty much the whole of their trolley was occupied by two-litre bottles of coke. But not the whole trolley. The little end section of the trolley was full of bread. There were at least twelve bottles of coke, probably more, and five loaves of plain white bread.

Young Master Till started keying things in and scanning vouchers.

Tilly didn't have a chance to accept or decline the offer of help. Alpha twin was already leaning over the counter, craning his neck so as to see the screen that customers don't normally see, and tapping away at the keys. It was quite an invasion of space.

"You've got to work the system, man," said Alpha to nobody in particular. "You just gotta know how it works."

And with that, the twins left, jabbering excitedly about how brilliant they were to get all that shopping for less than a fiver. They strode cockily, with swagger. They were bank robbers who'd managed to pull off a heist without even breaking the law. They were proud. They were just a little bit smug. And it was just a little bit impressive.

Because, of course, it was let down by the fact that they now owned twenty four litres of coke and five loaves of white bread. Bread that - I imagine - Alpha won't even eat. Least not until he's hungry.
Posted by Dave Gorman at 8:01 AM 6 comments: