When we announced the tour last month - a year in advance of it starting - I thought the time would mean a few people would make a note in their diary and that would be that. A few people asked why it was being announced that early... and the simple answer is that it's a bit weird to keep it a secret. Once the shows exist, what else are we supposed to do? Keep it all a bit hush hush and lie when someone asks me when I'm next playing live? That would be even odder.

As it happens a couple of venues are close to selling out already and have put in extra shows as a result. There's now a matinee in Salford, where shows will be at 4pm and 8pm on November 23 2014 and an extra show in Stafford a few days after the first. I'll be there on October 30th and then again on November 5th.
We've also added a brand new venue to the tour - the William Aston Hall in Wrexham - I'll be there on October 24th.

I've updated the Live Dates page of my site and on the map below.


Before anyone complains about any gaps on the map, this previous post explains them. Believe me, I find some of it as frustrating as you do.

Oh... while I'm here... you have just seven days left to catch Modern Life Is Goodish on demand: gor.mn/DGMLIGOD
Posted by Dave Gorman at 9:31 AM 8 comments:

Well That Was A Nice Surprise

Apologies for blowing my own trumpet but... well, I was just very pleasantly surprised to see this.

Richard Naylor - one of the producers on Red Dwarf - tweeted this picture recently. I don't know what journal it's from, but my guess is that it's Broadcast. Anyway... you can see why he was tweeting it as well as why it was such a nice surprise for me too.

I have a policy on Twitter: I never retweet praise or abuse. I might link to a review of something and I feel completely at liberty to promote whatever I'm up to but I don't retweet praise or abuse. I didn't  arrive at that conclusion immediately - I'm sure I took the bait (both sorts) a few times in my early days on Twitter - but that's where I've ended up. I don't for one minute hold that up as The Way It Should Be Done™ and I certainly follow several people who do one, the other or both on a regular basis and only occasionally do they make me wince... it's just that that's the way I personally feel most comfortable.

The recent series was an interesting time for all that because, obviously, it increased the rate of both. The word "troll" seems to be overused at the moment and I'm uncomfortable about using it here. It's now bandied about with such ease to describe anyone being even slightly anti-social online and I don't think it's useful to lump all such behaviour into one easily labelled pile. The person sending "you're shit" messages to someone they've just seen on the TV doesn't seem to me to be that comparable to, say, someone threatening sexual violence or going out of their way to upset some recently bereaved parents.

But I don't know what it should be called. It's not heckling. Heckling happens in a social context - a live show. And actually, while the media loves to portray live-comedy as a bear pit (boiler-plate press questionnaires always ask "what's the worst heckle you've ever had?" etc) comedy simply isn't the battle between performer and audience it's made out to be. Heckling rarely happens. People pay to see a show. They want to see a show. They rarely want to be the show.

Here's the thing. While the series was running I was getting a lot of feedback. It was overwhelmingly nice which made it easy to sweep aside the few abusive messages that arrived in amongst them. There were probably seven or eight people across the series and have been three or four since. I'm under no illusion that they're the only ones who didn't like it - but they were the only ones that decided to go out of their way to tell me they didn't. And that's the part that always seems weird to me. They're not trolls. They're not hecklers. They're just being a bit dickish.

I've never understood why it's supposed to be upsetting that a particular individual doesn't like me. Their tweet always says much more about their level of self-importance than anything else. I don't know any performer in any genre who thinks that what they do should please everyone. It's obvious that no matter what you do, some people won't like it. So everyone understands that what they do will please some and not others. Of course it does. So when someone sends me an abusive message the only piece of information they're bringing to the table is their name. I know some people don't like what I do. And now I can identify one of them. So? This could only be upsetting to me if I knew who they were. If they were someone whose opinion I valued and whose support I craved. Which makes their tweet look incredibly self-important and pompous. Because the act of sending it seems to say, "my opinion should be important to you. My opinions are facts. You should be upset about this because it is coming from me" and that's just weird. Self-importantly weird.

So to help those people out I've prepared this handy guide explaining - without rancour - why they look dickish to other people. It might be hard to read at this size, but if you click on it, it should be a little clearer. If not, you could try here. 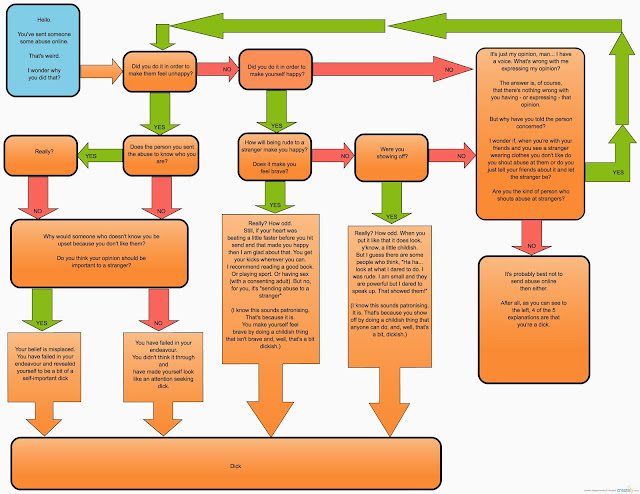 I can't really recall how this started, but this morning I ended up swapping some people's faces around and posting the results on Twitter. Not heads - jawlines and hairlines must remain intact - it's just the faces. (I'd forgotten at the time that I did once swap the noses and mouths of Laurel and Hardy too. Odd.)

A lot of people though that Eric's head with Ernie's face on reminded them of Mike Reid here. I can see it, but I thought he looked more Eric Idle. In any case, there's something odd it all looking and feeling both familiar and unfamiliar at the same time. 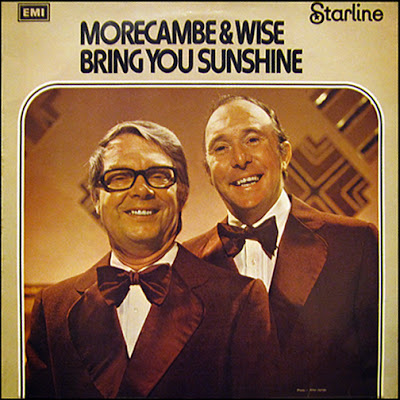 Or, as Simon Littlefield put it:

@DaveGorman "All the right faces, but not necessarily in the right order."
— Simon Littlefield (@SimoLittlefield) November 8, 2013

Meanwhile, in this one, there's something of a young Benny Hill when Eric's face sits on Ernie's head here: 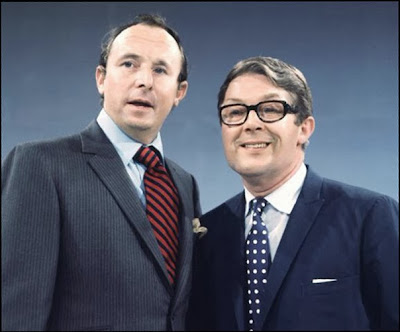 And then it started getting silly. You can click on any of them to enlarge... 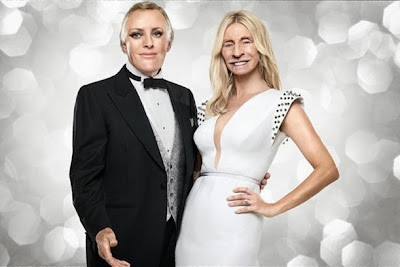