I've spent the last week or so wondering whether I should mention this or not. What the hell, here goes.

I received an email from someone who - for good reason - would rather not be identified here. She's in her 30s. She's single. She live in London. She uses Tinder.

If you don't know what Tinder is, well, according to Wikipedia it's a "location-based social discovery application that facilitates communication between mutually interested users." I'm not sure that's made it much clearer. It's a dating app. It shows you pictures of people you might be interested in on your phone. Because it's on your phone it knows where you are and so it sort of knows that they're close to you. You swipe the picture one way if you're interested in them and the other way if you're not and if a mutual attraction is discovered then it allows you to get in touch with one another.

At least I think that's what it is. I'm a married man. I got married in 2010. Tinder was born in 2012. I have no first hand understanding of what it is and how it works. The closest I've come to it before now was at a dinner party a year or two ago when a group of us crowded around a friend's phone as she showed us what it looked like and we all chuckled at quite how many men had chosen profile pictures that featured them and dolphins. A lot of men seem to choose dolphin pictures.

I imagine people put quite a lot of thought into choosing their profile picture. That picture is what people will judge you on. Will they swipe right (good) or will they swipe left (bad)? It all depends on whether they like the look of you or not. So you'd probably want it to be you-at-your-best, right? In any case, you'd certainly want it to be you.

Well, apparently not. Because, as my anonymous correspondent reveals, someone somewhere is using a picture of me. 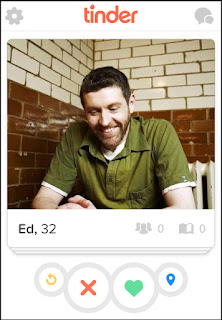 I suppose on some level I ought to be flattered by Ed's choices. (Of course, I know there's no reason to assume that a man who isn't using his own face would use his own name, but for ease, let's call him, Ed).

I'm not really sure what Ed hopes to gain by using my photo on Tinder.

I'm guessing he (or she) isn't trying to set up actual dates and that it's got more to do with sending spam or somesuch but even so, on some level, it ought to be flattering that someone thought it would make a passable profile picture.

Especially for someone listed as 32.

As far as I'm aware the only place it's been used is in the Independent where it accompanied an interview I did while promoting the first series of Modern Life Is Goodish.  Even though someone is clearly up to no good, the fact that they're taking 8 years off me while they're at it makes me feel just a tiny bit happy.

Sort of.
But probably not so happy that I'm happy for Ed to continue with his lie. So I'm trying to track Ed down. (If I can do so, it might make its way into series three.)

If you're in London. On Tinder. And female. And you happen to find a man called Ed who looks suspiciously like me, could you please let me know? Please don't swipe right. I mean, obviously, you'll have a strong, natural urge to do so - who wouldn't - but without knowing what he's up to, I don't want to be responsible for anyone making contact with him in any way. Especially on a platform I have no real understanding of.

But if you do find him, could you let me know where you were and - if Tinder tells you this sort of stuff - how far away from you he was supposed to be? I promise I won't share your name and details with anyone. You can send me an email via my website, or find me on Twitter or on the slightly-harder-to-navigate, facebook.

But you can't contact me on Tinder. I'm not on Tinder.

Right. I'm going to post this. Cue the "yeah, yeah, we believe you!" replies!