I had another crossword published in yesterday's Independent. I think I've had 14 or 15 puzzles published now, mostly as Bluth in the Indy but also in the Telegraph where I started setting a wee while ago as Django.

Most of my crosswords aren't themed, but yesterday's was. I tweeted about the fact that it was themed... and shortly afterwards, this was trending... 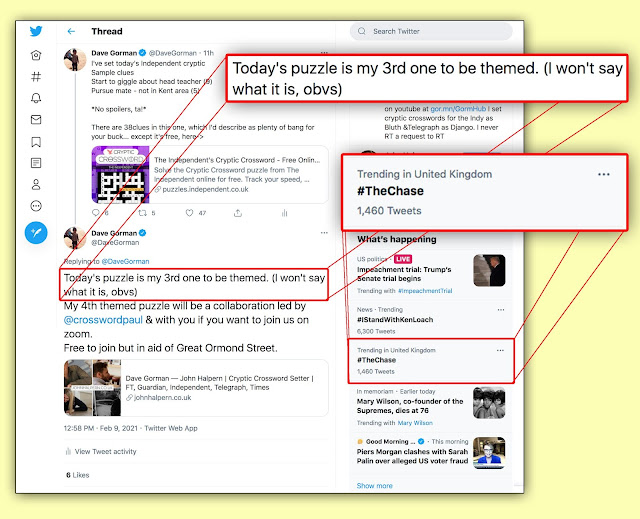 Coincidence? Could it possibly be that The Independent crossword is that powerful?

As you can see, I got the nicknames for all of The Chasers into the grid - (The) Governess, Beast, Dark Destroyer, Sinner/Man, Vixen and Menace. And I put Chase at the heart of it all. Bradley Walsh wasn't an answer to any of the clues, but I did hide his name in the grid for good measure. 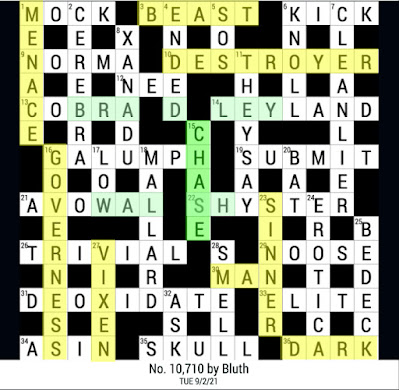 None of the clues related to the show. Someone who'd never seen The Chase would have been just as able to solve it as someone who was a devoted fan. But it was there for anyone who found it.

As well as being my third themed puzzle it was the first of mine to include a Nina. Nina is the crossword jargon for a hidden word or words. In this case, Bradley Walsh is a Nina. They're called Ninas after the American caricaturist, Al Hirschfeld who used to hide the word, Nina - his daughter's name - in all of his drawings.

But I digress. Like I say, most of my crosswords aren't themed. But my next one will  be as well. Sort of.

On Friday night, I'm going to be joining the setter best known as Paul for an online zoom event. We'll all be setting a themed crossword together - on the topic of Madness. (The band... not the current malaise)

It's free to join. If that sounds like your sort of thing, you can sign up for it here. 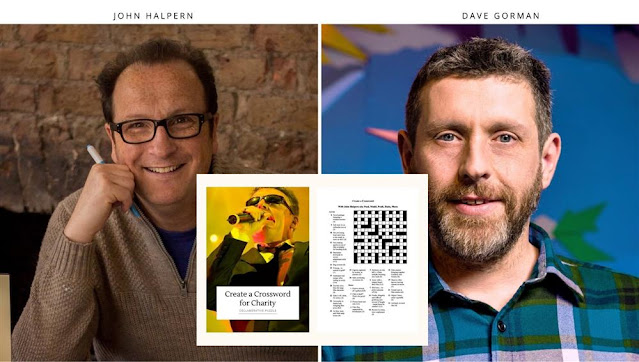 While it's free to join, we're doing it in order to raise some money for Great Ormond Street Hospital. If you feel able to afford it, we'd really appreciate anything you can donate at justgiving.com/fundraising/john-halpern-dave-gorman