I thought it was worth posting something here because I had dozens of people getting in touch with me yesterday about the same thing - largely on Twitter - and I didn't find the limits of Twitter very helpful as a way of responding...

It started when the announcement was made for the "Funniest Joke Of The Fringe" award.

The award is sponsored by the TV channel, Dave and the joke that, scooped the top prize - because as we all know, scooping is how top prizes are won - was as follows:

"I'm not a fan of the new pound coin, but then I hate all change" and it's attributed to a comic called Ken Cheng. 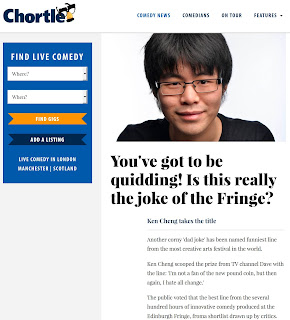 A lot of people were immediately scathing about the selection - with the comedy website Chortle writing,
"The choice is likely to inflame accusations of unoriginality for a gag that has done the rounds on Twitter. Cheng himself tweeted it as long ago as March 21, 2014, when news of the design first broke, but he was still beaten to it by many people."

I doubt there is anyone attending the Fringe who really thinks that is the funniest thing being said on a stage throughout the thousands of comedy shows being performed at the world's largest arts festival. What's more, I'd lay good money that it's nowhere near the funniest joke in Ken Cheng's show either.

Stand up is a more nuanced art form than that. You almost certainly can't extract the words that lead up to the biggest laugh in any given show, type them up and present them as a one-liner that will work well on the page.

I think that's true, even for those comics whose stock in trade is one-liners. Even then, the jokes aren't discrete units of comedy that can be assembled in any order, each standing or falling purely on its own merits. There's always more going on than that.

And it seems unfair for people to pick on Ken Cheng for telling the joke when we're unaware of the context in which he tells it.  Ken Cheng is a relative newcomer, but at least two of the other jokes in the top ten list - both told by very experienced (and brilliant) comics - are every bit as old as that one, if not older. (One of them was even in my original set when I was starting out at 19, but I soon dropped it when I realised it was a thought that had been had by hundreds of people before me.)

The truth is of course that the short list of "best jokes" aren't the best jokes at all. Not at the fringe and not even in the shows from which they've been culled. If you compiled a list of the things-that-made-people-laugh-the-longest-and-loudest-at-the-fringe-this-year it wouldn't make any sense in print and would have to be book ended with countless but-it's-the-way-she-tells-it and you-had-to-be-there and but-of-course-it-won't-make-sense-because-you-didn't-see-the-first-fifteen-minutes-where-he-set-up-this-idea codicils. So instead you get a list of these-are-the-only-things-we-could-extract-that-are-understandable-as-jokes-in-isolation-when-put-in-print-but-it's-destined-to-get-a-lot-of-coverage-and-that-works-well-for-all-concerned-okay?

At this stage, you might be thinking there's no reason why I ought to feel compelled to offer an opinion either way. But it gets more complicated (for me) because a version of the winning joke had been in one my TV shows. The shows that are broadcast by Dave. The channel that gave Ken the prize.

It was in Series 2, episode 8 as it goes.  We're currently working on Series 5 - so it's more than 3 years old. But by sheer coincidence it happened to be the episode that was repeated last night... on the same day as the announcement.

Now this raises the obvious question: why were you telling a joke in your show if you know it's unoriginal and don't think it's very good?

Here's the thing. In that episode there was a found poem about the new one pound coin. I road test all the material. That found poem always went over well. Found poems basically work best when the people writing the below-the-lines comments are pompous. It's an exercise in pointing out how seriously they take themselves by taking them even more seriously in jest. So people expressing outrage and upset about a topic that ought to generate none are perfect.

And I like it best when the end results contains comments both for and against because it helps underline that none of the opinions are mine. (You'd be amazed at how many times people write to express their upset at something I said in a found poem believing it to be my heartfelt opinion).

But in setting the poem up, I often need to give a precis of the topic. I need to explain why people might be for or against. I need to provide that tiny bit of context that will make people understand where these things have been found.

Like I say, before we get to the recording of the show, I run it in over several live shows to try and find the best way through the material. And this simple thought - necessary to make the found poem work - was something of a road block. There basically wasn't a way of saying it that didn't lead to some form of negative judgement.

If you say it in a straightforward way, without a pause before the word 'because' then some people  still hear the joke and some of your audience think you've told a bad joke badly. If you put the pause in and acknowledge that it's a joke the whole audience thinks you've told a not-very-original-joke. If you rephrase it and say, "of course some people don't like it because they don't like it when things are different" some people think, "why are you going round the houses?" and other people think, "oh, you've missed a joke there, you should have said, 'some people fear change'..." and so on and so on.

Basically the joke is so obvious that some of the audience will think of it whether or not it is spoken aloud. And so even its absence casts a shadow over proceedings. And yet the singular meaning - that some people don't like things changing - needs to be expressed to make the next section work.

Our solution was to acknowledge the sentence for what it was. And so the show started with a warning that later on I would be telling an accidental, but unavoidable joke involving the words 'fear change', that I shouldn't be judged for it etc etc... and then, 20 or 30 minutes later, when it came in to play, I'd be able to play with the audience's reaction, whatever it happened to be.

But of course I don't expect everyone to have a 100% recollection of the show and the way in which every word was said. And so a lot of people who had seen the show had a vague recollection that I'd once said something about the new pound coin and the fear of change and then they read the story about the prize and suddenly I was receiving dozens of tweets from nice people saying things like this... 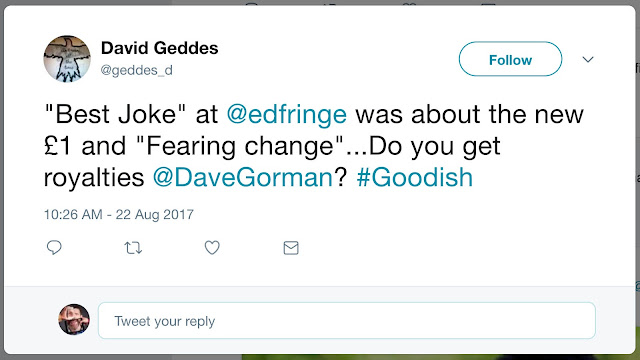 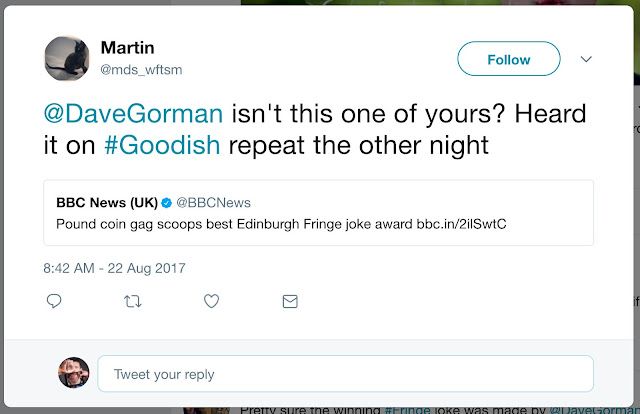 At which point the 140 character limit makes it tricky to explain.  Because what I want to say is, "yes you heard something similar on my show, but you've forgotten the fact that I was sort of disowning it because it's not my joke it's one of those jokes that everyone thought of but I had a good reason for saying it, but at the same time please don't think I'm being really judgemental about the person who won the prize because I don't know the context in which it sits in his show but I do know that every joke in the list has been taken out of context in some way but people are happy to receive positive PR during a very competitive festival so let's not rain on his parade."

In acknowledging that the joke had appeared in the show, some people thought I was claiming it as mine and wanted to tell me that it was a shit joke I shouldn't be proud of. In explaining that I knew the joke was unoriginal and had been in the show in that context, I appeared to be critical of Ken Cheng. Which I don't think is fair either. Good luck to him.

Also: it's only a bloody joke.

By the way, if you want to watch the show, it's on UKTV Play as are the 28 other episodes from series 1 to 4.