When Genius Comes To Life 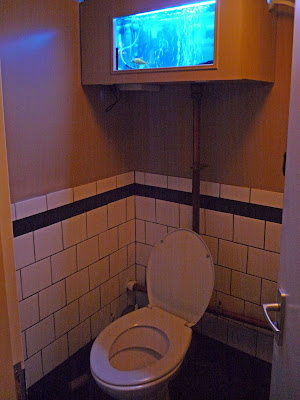 Hosting Genius means I get to hear an awful lot of very silly ideas. I love the ingenuity that we find in the Genius inbox but it goes without saying that they generally aren't the kind of ideas you ever expect to see in real life.

But then last weekend I did. Sort of.

It's a fishtank/toilet cistern - an idea we discussed in one of the radio shows some time ago.

If I remember the idea was supposed to have two benefits. 1) you no longer have to change the fishes' water because that happens whenever you flush. 2) as the water empties the fish panic and swim against the tide only to be reprieved when the water level rises once more: thus receiving exercise and excitement. Hmmm. I can't remember which show it was in so I've no idea what the Guest Genius made of it.

Anyway... this example (it's in a bar on Broadway Market) is purely cosmetic - the fish tank is mounted directly in front of the cistern and isn't really affected by the flush... but even so... it was a pleasant surprise to see something that manages to be utterly strange and utterly familiar at the same time.

Moments later I saw a man walking his pet miniature elephant down the road but I failed to get a picture of that.

Incidentally... I spent part of last week making trails and stuff for Genius so I expect I'll have a broadcast date for you soon. Ish. I'll be sure to let you know...
Posted by Dave Gorman at 5:49 PM

I cannot wait for the TV show!! I'm sure itself it will be genius!

I'm sure I remember in the first series, one genius suggesting breathalysers on mobile phones, and a vague memory that those crazy Japanese have in fact produced one. Or have I dreamed the whole thing .

The fish tank may provide entertainment for one half of the population -- so what do the women get to watch while they pee? ;-)

The Genius in question was David Geshater(sp?) "who lives in Paris, but hails originally from America" - Series 1, Episode 5.8. Those Genius CD's certainly pass a dull afternoon!

PS: I now REALLY want to see a man walking a miniture Elephant...

Just wondering which bar on Broadway market it's in? I've never seen it before! Or maybe it's a gents only feature.

I can imagine what RSPCA would say about the original idea. Sounds vaguely like water boarding for fish.

Actually, it'd be way bad for the fish. The change in water temperature as the cold water dumps into the room-temperature tank would probably do them in.

Even if you had fish that can deal with a wide temperature latutude, in a normal tank the water gradually becomes host to microorganisms that help to keep the water clean and fish healthy by eating various bits of nasty that the fish keep excreting.

Even if you flushed it often enough that the water stayed clean, the water treatment facility usually adds chemicals to the water to keep it safe to consume. Good for humans, bad for fish.

Still, it's a pub. What's the chance the toilet's ever going to be flushed anyway?

Every home should (and can) have one! See http://www.fishnflush.com/order.asp#

The mobile phone breathalyser sticks in my mind as being the Richard Madeley episode - can't remember the fish-cistern...

I do remember back in my youth (in the 1980s) seeing fish tanks in one of those below-ground public lavatories. I wish I could remember where it was... I tried to google it to see if I could find any reference to it but just came up with this hilarious but sad blog:
http://garvanellison.blogspot.com/2008/10/five-sinful-lifestyles.html

Found a great short story about a miniature pet elephant...

Is the Anonymous said...
www.fishnflush.com/order.asp# site for real??
That is awesome or should i say GENIUS!
I'll answer my own question - Yes i should!!
Rob

Found this that may interest you.