Thanks To Human Sat Navs 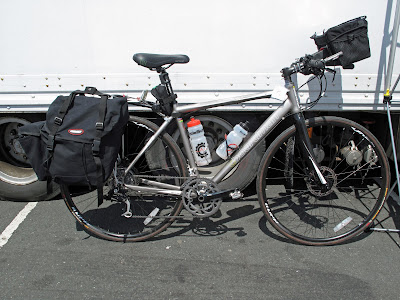 So this is my Boardman bike, rigged pretty much as I think it's going to be when I tour. I've changed the saddle, got some luggage from Carradice (ace stuff), changed the pedals and got comfortable clipping in. I'm very happy with it.

A couple of other Boardman bike riders spoke to me when I was in Brighton and they were all singing the praises of theirs too. Lovely stuff.

But the main reason I'm writing this is to say a big thanks to everyone who's responded offering their services as a Human Sat Nav.

I've been really surprised by the response. I've tried to send an e-mail to everyone who's written although I haven't yet been able to go through them all in detail and organise who will be my guide on any given day. There are some days where I've got as many as twenty people offering and plenty of others where there's only the one. Where there are several I'll probably go for a lucky dip of sorts. Or maybe it's an unlucky dip. It's not as though guiding my lumbering body through a 50 mile ride is a particular treat.

I won't know for sure until I go through them all properly and filed them in some kind of order but I'm pretty sure I've got almost every ride covered. I reckon there's only two or three of the routes that people haven't volunteered for and they tend to be in the least populated parts of the ride... where there's likely to be only one road carrying me from A to B in any case.

Anyway... I'm going to have to pull the shutters down and ignore any new offers until I've sorted out the current inbox. I'm hugely grateful to everyone who's written and only sorry that I'm not more organised. Ta.
Posted by Dave Gorman at 10:12 AM

Email ThisBlogThis!Share to TwitterShare to FacebookShare to Pinterest
Labels: cycling

Glad to see that you've got your setup sorted Dave! Having confidence in your faithful "steed" is a big part to any monster ride. Smashing stuff!

Hope that your planning comes together well.