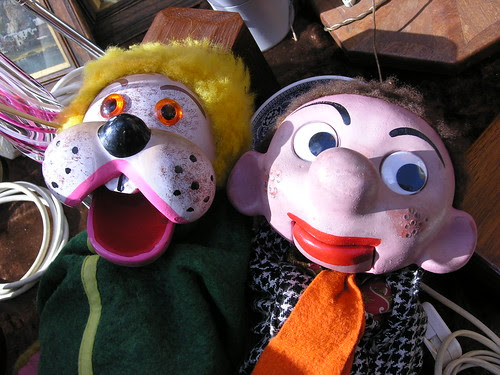 On Tuesday night, feeling kind of jet-lagged from Latitude, I took part in the Radio 4 show Chain Reaction.

To their credit, Diana Ross doesn't sing the theme tune.

Each show is an interview but that episode's interviewee becomes the next ep's interviewer with a new interviewee and so on. So I become a link in the chain between Robert Llewellyn and Frank Skinner and it worked out that it was convenient to record both those episodes on the same night.

It was only when I got to the venue that I started to feel the unusual pressure of that situation. You can't really prepare for being interviewed so there's no way of feeling in control. But if the audience didn't enjoy me being quizzed by Robert... well then it would be really uncomfortable stepping on stage to ask questions of Frank after the interval. And feeling a bit spaced and jet-laggy didn't help.

I needn't have worried. The audience were fab and Robert was a warm, charming and witty host, which made the first half easy. And that meant I felt really relaxed stepping out for the second half. The truth - I suspect - is that it was never going to be a hard task to interview Frank. It's not exactly a difficult job to get him talking... and if he's talking he's funny.

I don't know how the chain ends but I think it starts with Robert-me-Frank and then goes to Eddie Izzard and then, perhaps more oddly, Alastair Campbell and beyond.

I'm not sure when they'll be broadcast but I think it'll be sometime in September. Ish.

Thanks to all who came along. It was a really fun night.

Thanks for your 50% role in a fantastic evening. I'm a long-time fan, but this was my first DG sighting in the flesh. Especially enjoyed your "crazy e-mailing woman" anecdote. Looking forward to hearing the broadcast version.

Chain Reaction was really good fun! Everyone involved was very entertaining and funny. I really like the questions that Robert put to you as well. It was interesting hearing more about your early work, and as Tom said, things like the crazy email lady are interesting (if not not slightly bizarre!)

Frank was hilarious as well. I could have happily sat there for hours listening to it all!

So they went for the Steps version then...

A really fun & interesting night - both shows were excellent.

And thanks for kindly sending out the mailshot with the change of venue to your subscribers - it was originally fully booked by the time I'd read your first missive so we were delighted to learn it had moved a larger space & have the chance to attend. King's Place is a great new venue - so much more cool, comfy & pleasant for the audience to hang around in beforehand. Please do ask the Beeb to use it more often!