We had a guest on the show this morning. Richard Whitehead. He's seriously impressive. He's a marathon runner - hence his twitter name, @MarathonChamp - but they don't have a marathon in the Paralympics for his category (T42) so he had to run a shorter distance.

And the longest distance available to him... was the 200metres.

That's a lot shorter. More than 26 miles shorter. That's quite a switch of discipline. And then he went and won a gold medal. Blimey! 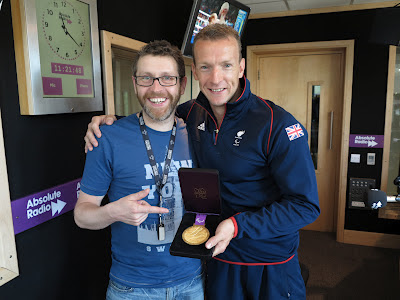 One of the things I love about doing the radio show is the way it inspires me to seek out new music. It's easy to get complacent. But while the songs I bring in from home are sometimes old favourites, I make an effort to find new things that will excite me and, obviously, I hope some of them will excite some of you too.

Well, I can't remember the last time a new piece of music got under my skin in quite the same way as this one. I bloody love it. It's by a band called Dogtanion. Who's really a man called Matthew de Kersaint Giraudeau. (The other two people you can see in this video are Kerry Leatham and Peter Lyons... I expect I'll play some of their stuff on the show soon too.)

Anyway... here it is, it's called Islam. But it's not about Islam. At all. Listen to the lyrics. Although there are some swears... we took those out on the radio.


This Many Boyfriends are a band from Leeds that I’ve played at least once before on the show. Back in May I brought in a song called You Don’t Need To Worry. This next song is, I think, a little older than that one. It was released about a year ago, it’s called Young Lovers Go Pop… but it – and You Don’t Need To Worry will both be on their debut album – which is self titled and is produced by Ryan Jarman of The Cribs. It’s due for release in October this year. Anyway here it is… This Many Boyfriends and Young Lovers Go Pop…

Oh... by the way, prompted by a listener - Darren Richards - I created a spotify playlist of all the songs I've brought in to the show so far this year. I think there was just one song I couldn't find there... so it's pretty complete at the minute. If you use Spotify and want a playlist that already has 61 songs and lasts over 3 hours... it's here. I'll try to keep it up to date as the year goes on.
Oh... and the podcasts for the show - which contain all the talky content from the Sunday morning as well as loads of extras - can be found here.
Posted by Dave Gorman at 2:09 PM