Well that was an exhausting weekend.

I had the second of the current run of Screen Guild shows at Hoxton Hall on Saturday followed by the final show of my time at Absolute Radio on Sunday morning.

I love the Hoxton shows but there's nothing I do that's quite as nerve-wracking and/or time-consuming. It's always all new material - which means that I have no idea how it's going to go - and I start building the powerpoint for it at about 7am and finish, some 600-800 slides later at around 6pm... at which point it's time to head out to the venue.

The acts - Jay Foreman, James Acaster, Lucy Beaumont and Pete Firman - were all great - the line-ups are always strong - but the show didn't quite take off for me in the way the last one did. But overall it was a good night. And incredibly useful. Every bit of new material had legs. So nothing will get thrown away as useless, but all of it will need honing if it's to survive in the big bad world of stand up.

Which, I guess, is the point of these shows.

It was followed by an early start and our final show from Absolute Radio. Which was difficult for completely different reasons. I blogged about the reasons a wee while ago so I won't retread the same ground now suffice to say I've loved working there and know I will miss it hugely. We wanted to avoid getting mawkish and overly-sentimental about it all so I hope the final show wasn't wallowing in it's final-show-ness.

Michael wasn't there this week - he had a show in Moscow - so I took on the angry mantle and did a Dave Gorman Isn't Michael Legge But Is Angry feature in his stead, while all the other regular features were in place with a final Ward's Weekly Word and a not-really-final Found Poem. 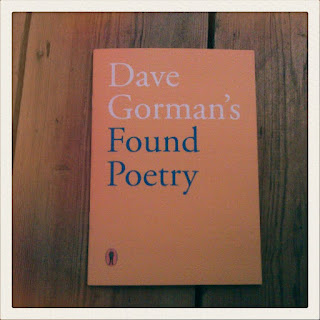 I say not-really-final because Found Poetry found its way into the last tour show, exist in cheap-and-cheerful pamphlet form, I regularly put one in the Hoxton shows and I did one on stage when I guested at the Horne Section recently.

I won't continue to put one together every week - I'm looking forward to not spending quite so much time wading through the insanity that is the bottom-half-of-the-internet - but I will still compile new ones from time to time because they provide a really useful change of tone and pace to a live show - so I'll keep them in the mix for future projects.

There were two very different songs from home this week. The first is folky, the other all electronic. But both of them are fantastic and if the final show's music hadn't involved a ukulele and a stylophone something would have been amiss. This is Stand Up Show by Jonny Kearney and Lucy Farrell from the album, Kite.

And this is The Robot Heart by Alto45 who describe what they do as "homemade pop music from three men in labcoats". You can find this track on the album, The Spectrum Sings.

I've added these two tunes to my Spotify playlist of (nearly) all the songs I've brought in from home this year. It's here... and the podcasts for the show - which contain all the talky content from the Sunday morning as well as loads of extras - should be here.

If you've listened to the shows - whether live or in podcast form - then we're proud that you chose to join us and appreciative of your company. We wanted to make the show not be about us - and we were always really proud of how smart and funny the audience would be. Thanks.

Dave, thanks for doing the shows. I listened right from the beginning when I had just moved from little old England to big young America, and was feeling a bit like a fish out of water. The show was like a weekly injection of English water into my fishy ears. Or something like that. Anyway, it kept me cheerful. Much appreciated.

Dave, thanks for all the shows. You taught me so much, like that we Americans were not insane to call it Soccer, and that bouy could be pronounced in such a way that a lifeguard would probably be very upset at you after they went in search of a young male out in the water.

Thanks for a great series of shows. So many long car journeys have been made entertaining listening to your show. I still have four more to go but will try to make them last.
Hope you and Danielle can join forces again sometime in podcast land...

Just off to walk the dog and listen to this show now. I've been a podcast listener since day one (this is me from the first show: Tom White's Jingle - Youtube), just want to say it's been fun, thanks.

Will miss these podcasts a lot - like many overseas listeners, the show brought a little bit of home into a faraway world. Get yourself on tour in New Zealand Dave!

I'm half way through the final podcast now. Your comment about trashing buildings that "you might as well if you're knocking it down" resonated and I wondered if that was your approach in evicting the brilliant Indiana Bones and the Temple of Groom from Pun Street last week, in favour of something so unmemorable that I forget it's name!

Now I have yet to hear the final planning committee, so I live in hope that the much weaker Salon Le Bon has been replaced by one of the unmentionables ( British Hairways, etc). Until I hear it I can believe it to be true, in a Schrodinger's podcast kind of way!

Is there anyway I can go back to the beginning and download podcasts from show 1? I'm figuring that after three years they'll sound brand new to me - and provide me with another three years' worth of entertainment. Loved it all Dave, will miss it very much!

I 'should' be downloading this week's podcast. I 'am' feeling sad because there isn't one! By the way, I am gradually listening to the older podcasts and, last night , heard one from the beginning of 2010, where you said, "on the day we finally close Pun Street, we'll raze Fail Lane to the ground." I hope this happened! From David Trevor.

@Lynn: there are a couple that have gone AWOL but as far as I know most of them are still out there on itunes or on the Absolute site.