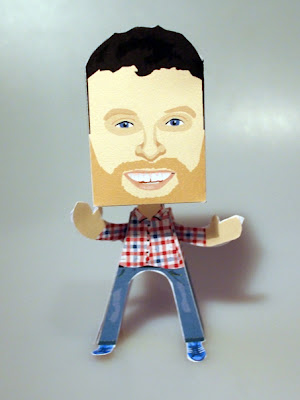 I'm delighted to announce that I'm making a new series for Dave. That's the channel, Dave, not me-Dave. (I've already had three conversations today where I've had to clarify that I'm not talking about myself in the third person and I don't doubt there will be many more such conversations in the weeks to come.)

The show is called Modern Life Is Goodish because, well... because that's what it's about. Ish.

The starting point for the show is my last tour-show, Powerpoint Presentation. I guess a lot of the material in that show was gleaned from looking a little closer at the information (and misinformation) that we normally allow to float past our eyes unchallenged. But a lot of the material also comes from reacting to it from playing with it, experimenting and generally being a bit mischievous... and that spirit will definitely inform this series too.

So it's a stand up show. Of sorts. My sort. There are six shows in the series - each one being an hour in length - which means I can really get my teeth into things. And again, the lessons I've learned during the run of Screen Guild gigs are going to come in bloody handy. There's a big store of ideas and material right there. Phew.

We're filming the shows at The Tabernacle in Notting Hill, which is a fantastic space. I knew straight away that with a series like this, I wanted to avoid the anodyne atmosphere of a TV studio and make it somewhere special and atmospheric, somewhere the audience will feel more involved - and The Tabernacle is perfect.

I hope they'll eventually be released on dvd, as I'm the one person in the UK that doesn't get Dave (the tv channel Dave, not you Dave)...

Looking forward to this!

And hey, Mike Cable, try TVCatchup.com for getting Dave.

Excellent news. I saw Powerpoint Presentation at the Edinburgh Fringe. You are my second favourite Jewish Blogger.

I used to live in Minnesota and in the local form of English "ish" is an expression of mild disgust, equivalent to "euw". For example, "And then I put my hand in the bag of apples and they'd gone all squishy and mouldy", "oh ish!"

It seemed important I mentioned this when I started typing, now I'm not clear why...

Little teenage me goes squee over the title being a bit like a blur album.

... yeah, alright, it was old adult me that went squee.

This will be the best show on Dave. Ever.

Saw Dave in Tring on 5.6.13, trialling his material for the tv shows - absolutely excellent! So clever and so funny, can't remember when I last laughed so much. Really looking forward to seeing Dave on Dave (if you know what I mean)