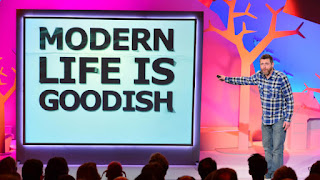 I got Too Much Information paperback for Xmas, so now seriously confused. I really wanted to see you at Cambridge Junction, but had no one to look after me

I don't know how or why the phrases Trade Paperback and Paperback are used... but that's what they're called.

The Trade Paperback is larger and a bit more expensive. I guess it's the halfway point between a regular paperback and a hardback. If it goes well, they bring out the regular old paperback a little way down the line. The paperback is smaller and cheaper. (And, in this instance, has fewer typos!)

Was at the recording on Sunday with my family! Loved it, don't think I've ever laughed so much! Was awesome! Just can't wait for them to air now so I can watch them again :)

A trade paperback is not a paperback? Confusion! This sounds like it could be ideal material for an observational comedian who has an eye for the absurd things that the world decided to just accept. Anybody know where we could find one of those?

When will season 3 air, I'm so excited for it.
Modern life is goodish is one of my favourite comedy shows.

@Andrew Collier: the problem with that is that the comedian would have to first of all explain what the publishing industry called a paperback and what it called a trade paperback and the audience wouldn't care because these are terms that they rarely if ever meet. It's more set up than punch. I find those things work better if whatever it is has been hiding in plain sight!

@Lewis Shedden: series 1 and 2 both started in mid September. I don't know if a firm decision has been reached for series 3 yet - until it's actually in the listings, things can always change - but I'd expect it to launch around the same time.

Cheers dave, looking forward to it. :)

I was at the recording: when the new slides have to be hurriedly loaded onto the laptop it's very believable. Not that it's the only thing that we believed that day...

Dave if you have any influence over this could you do us a big favour and make sure your new series is again broadcast on Tuesdays? It's just we got used to seeing your face and saying "Ahh, we need to put the bins out tonight". It became almost Pavlovian and we've been at a bit of a loss since the last series ended.

Obviously we've done the obvious, setting a Google Calendar reminder, but if we keep using it I'm worried that sooner or later we'll start getting deluged with offers for discount bin bags every Wednesday morning.

Also it would be great if you could arrange not to appear on other nights, and also to delay transmission by a day following a Bank Holiday (two days following Christmas or Easter).

p.s. I'm off to bring the bins in; last night's repeat really threw us.

*I can't do anything.

As a teacher I can *totally* get the "can't beat doing it in front of an audience" method of refining your material. I have some lessons that I do four times in a week. Back when I was training, we had to prepare everything - almost to-the-minute plans from the kids walking in and getting settled to the topic changes to tidy time to shepherding them out.

Now I just have note in the diary about what I need to cover and maybe some bullet points about things I have to make sure they understand. Sometimes I have some aids (video, activity, etc.). Buy beyond that, in all honesty I guess you could say I wing it.

Every class is different. You just *can't* plan to the minute in the same was as every audience will react differently to gags. And the intellectual exercise of on-the-fly adaptation ("they're not liking this - let's ditch it/use different words/speed up") is really enjoyable.

So, yeah. I could totally do your job ;)

Seriously, can't wait for season 3. I rarely laugh out loud (or LOL as the kids say) at TV shows these days. I binged through the first two seasons a couple of weeks ago and got genuine belly laugh from every episode. Thanks :)

Oh well, thanks at least for not doing one of those asterisks without anything anywhere saying what the asterisk means. They're even worse than...