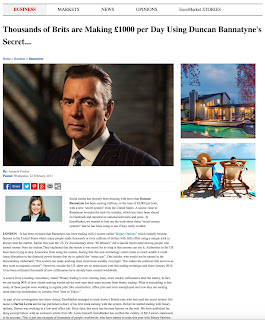 Does Equity know that all of these bad actors are behaving criminally?

This same ad pops up on Facebook regularly. And no I haven't clicked on it.

Using this secret was my retirement plan. You've destroyed my dream. Damn you Gorman!

Isn't this something the ASA can get involved with?

Regularly doesnt mean often Dave. Once a decade is regular.

Is it not worth contacting Duncan bannatyne ET Al who are used and then seeing how they feel about the abuse of their images to work together and make a difference, increasing the pressure to make sure checks are made?

I bet if you put an advert on their system saying how BT & Yahoo are complicit in the promotion of fraudulent activity. It would be taken down in minutes.

Just had a thought don't you know some guy, some might say he was a bad actor, who'll do you a video ad for a couple of quid.

Pedantry says that regular could be annually, or even a longer interval, it applies merely a consistent period of time. Frequently however would have a reasonable implication that they have caught this in 22days. Frequently is better than regularly!

Do they have the right to use Duncans name for these scams?

Dave, we can kick starter an advertising campaign to cover the costs. Let's make an advert that explains the points you make and get it hosted by BT and Yahoo.