I meant to write about this a while ago... but I was too busy and so it drifted away with a shrug... but, well, here's something that doesn't seem to be quite right.

On August 25th I was promoting the tour - that I'm now loving by the way - with an interview on Dermot O'Leary's Saturday Breakfast on Radio 2.

As the name suggests, it's an early show. It's also based in London, where I no longer live. So I was up earlier than normal. Well, we have a toddler so I'm often up early, but I'm not often showered, dressed and out of the front door by 5.20 am. But I was that day.

Now me mentioning the particular radio show I was on my way to appear on might come across as something of a humblebrag, it is after all almost entirely incidental... but I think the hour of the day is relevant and that it would seem odd not to add some context. (But maybe it's just a humblebrag.)

The reason I think the hour of the day is relevant is because this is about Twitter... and in my experience a Twitter feed looks different at different times of day. I often only realise that I've stayed up too late working, when I become aware that my Twitter feed has become dominated by Australian comics.

Anyway,  that morning, as I sat bleary eyed on a train, I had a quick glance at Twitter. And something caught my eye that, had it been there at, say, 10am, would have probably just been washed away on the tide of tweets that swirl around in my feed during normal, up-and-awake, British hours.

The thing that caught my eye - or rather, the things - looked sort of like these...

... but they weren't these. The tweets above were sent today. I've included them as examples because the actual tweets that caught my eye on August 25th have been deleted since. But they were the same shape and style as these. In that they were retweets of spam.

So, in this instance, the account Learn Languages (@differlanguages) has retweeted Rubie Rosas (@Rosas_rubie) who's retweeting and commenting on tweets about stuff you can buy that just happen to include links to the places you can buy them from.

I guess it's possible that, whoever 'Learn Languages' is, they just happen to think that Rubie Rosas comment about the necklace received by Débora Díaz is worth retweeting for its, um, sass(?)... but I doubt it. And I doubt the sincerity of the original tweet about the necklace from Débora Díaz because, well, because here she is tweeting about a bracelet her boyfriend, Josh, got her on October 16th. .. 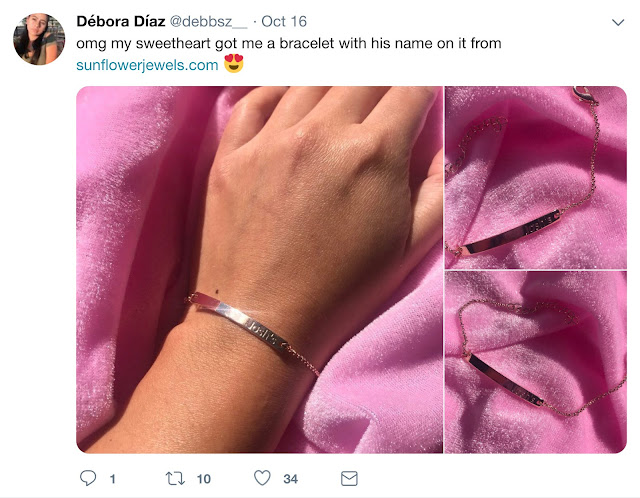 and here she is tweeting on October 17th about a necklace she got from her boyfriend, Andres... 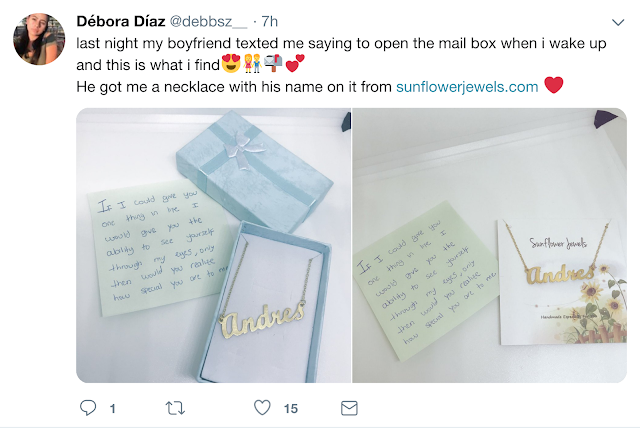 She moves on fast, that girl.

And for what it's worth, here she is tweeting about another sunflowerjewels necklace and also a keychain, with both tweets posted on October  8th... 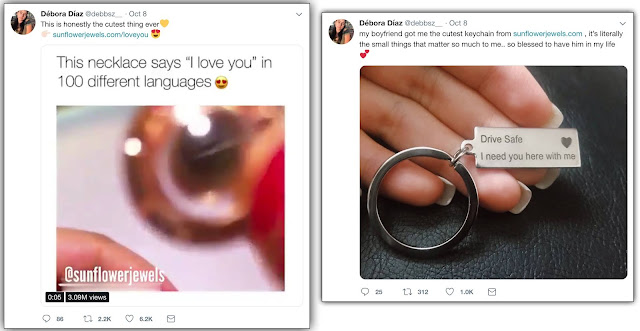 I guess it's possible that Débora Díaz has two boyfriends and they're both aware that she's obsessed with SunflowerJewels and so buy her gifts accordingly, but it seems more likely that her account is being used to send spam and that Rubie Rosas and then Learn Languages are amplifying it.

I know Twitter is polluted by all sorts of spammy garbage and I spend about 20 minutes a day blocking all sorts of p0rnbot nonsense. But I'm not following those people and I appeared to be following 'Learn Languages' and that's what seemed so odd.

Because, even setting the spam to one side, it's not really the sort of account I would have followed. Most of its tweets look like this: 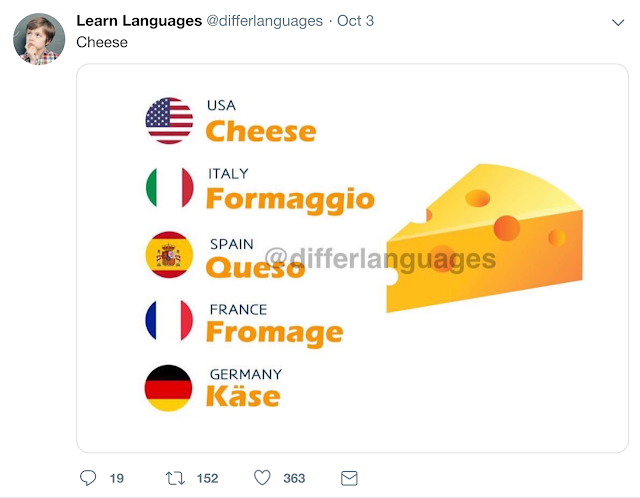 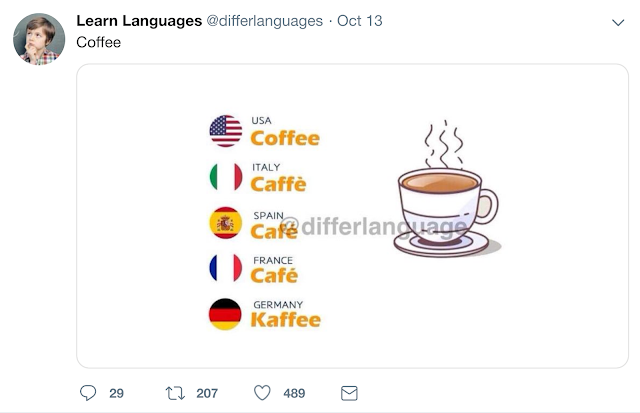 and as I'm not the kind of person who wonders what American for 'cheese' is, it seems highly unlikely  that I would have followed them in the hope of finding out.

So I started scrolling back through their tweets to see if I could see anything that would make me think, "ah... that's the sort of thing that would have persuaded me to follow them!"

But nothing of that sort turned up.

What did become apparent is that tweeting cue cards for simple words in various languages was a pretty recent turn of events for @differlanguages.

They'd only been doing it since August 10th. Prior to that, they'd been tweeting macro photography - close up details of images photographed under a microscope.

I guess that's a little more interesting to me. I mean, it's just possible that I might have decided to follow that sort of account on a rainy afternoon, one day.

It still seemed a little unlikely... but not impossible. And it didn't explain how an account dedicated to macro photography had suddenly switched to tweeting bland shit about languages and was also - being paid (presumably) - to amplify spam. 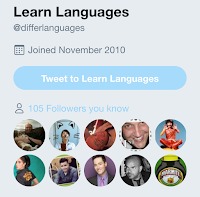 What made it all the more curious was the number of followers they had... and the number of people following them that I was also following. Apparently, amongst their 377,000 followers were more than 100 people I follow too.

In that screen grab you can see the avatars for American comics, Randy Rainbow, Brian Posehn and Sarah Silverman, Australian comic, Celia Paquola, Irish comic, Jarlath Regan and British writer/producers, Ash Attalah and James Serafinowicz. As well as three others whose avatars aren't instantly recognizable to me even though I'm pretty sure the one on the top right is a picture of the magician, Doug Henning. (He died before Twitter existed and having a Twitter account would be quite a trick.)

Oh, and in doing that scroll, the image of Doug Henning leapt out and revealed itself to be the avatar of Mitchell Hurwitz... the creator of Arrested Development, no less.

I mean, of course it's possible that any of these individuals would have clicked a link and followed an account devoted to macro photography... or even to learning simple words in common languages... but for all of them to be following this account just stretches credulity a little too far.

I didn't know what it had been before... but it seemed obvious that the change of focus that account had gone through in early August hadn't been its first transformation.

Surely, at some point before that it had been something more interesting to have so many comics, writers and comic-wranglers following it.

Unable to work out what it had been, I asked the question... 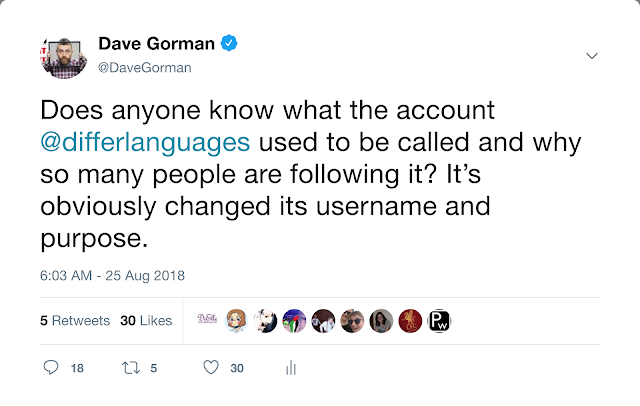 It only took about 8 minutes to get a proper informed answer...

Which links to this. Which tells us that the account used to belong to Harris Wittels. Harris Wittels was an American comic and writer. He wrote for The Sarah Silverman Show (which presumably explains why she's following the account, as well as cast member, Brian Posehn) and was a writer and executive producer on Parks and Recreation.

I doubt many British people knew his name. I didn't. But I did know the word, 'humblebrag'. He coined it. He was the man behind the twitter account @humblebrag that simply retweeted tweets of a humblebraggy nature. That's what I followed.

He passed away in February 2015. His account was taken over in early June 2018. It must have been quite a valuable account, what with so much influence. All of his tweets were deleted. The name was changed first to @micropics and then, in August to @differlanguages. And that's who they are now. Tweeting rubbish to make them look like an account with a purpose and then also spamming.

I don't have anything nice to wrap this up with. It's been written about in a few places now and lots of people have reported it to Twitter. But it's still there, profiting in its own small way, from the death of a man who was creative and funny and changed the language, by adding a word to it. I wonder what the Italian, French, Spanish and German words for humblebrag are? Maybe @differlanguages will tell us one day?
Posted by Dave Gorman at 4:45 PM

You'd think the people who brought us "schadenfreude" would've had this one licked but you'd be mistaken. There's no German word for "humblebrag", just disagreement over possible substitutes. The only consensus is that the loanword isn't quite as bad as the literal translation, which is what the three big dictionaries (Duden, PONS, & Collins) all suggest.

The language pics it's posting aren't even all correct. The dance one for instance. The Italian it gives it Danza, and the German is Tanzen. Both mean dance, but not the same dance. Danza is a noun, as in "a dance". Tanzen is a verb, like "I will dance". So that's misleading.

Of course I'm sure they have no interest in actually conveying accurate language information so a quick trip to Google Translate is all they need, correct or not.

Thank you for paying attention to the odd bits of our strange world. That's what I miss about Modern Life is Good-ish. I'm glad your tour is going well!