Right... I expect this'll be my last post for a little while. I didn't have Christmas last year. I'd missed several deadlines on my book, had torn up a big section and started again and so I decided to stay at home, ignore the festivities and work. I say 'decided'... I didn't have much choice. I got up on the 25th and worked from 7am through to 4am stopping only to call my folks and to make - and consume - a butternut squash risotto. It was quite definitely the least Christmassy Christmas of my life.

I did do another Christmas by myself. I was in New York doing an Off-Broadway run of Googlewhack Adventure at the time. There was no show on Thanksgiving because, quite rightly, every American stops for Thanksgiving... but the same isn't true for Christmas and so the show went ahead. It was sold out as well. The audience was almost exclusively Jewish save for two British tourists and a guy who'd had a row with his wife. I had a Chinese takeaway for my lunch that day and then went to work... but it was still a damn site more cheerful than last year's Stakhanovite non-festivities. (Yes, I do know that writing can never be truly Stakhanovite in nature... forgive me... indulge me...)

Anyway, it's satisfying to look back on the year and feel that the work I was doing twelve months ago was worth it. The book did really well and as a result, I think there's a new cheap and cheerful edition coming out in the spring. Hurrah.

And this time round I've got all my work wrapped up and ready before Christmas so I'm able to stop and enjoy. The telly version of Genius is all boxed and ready. I don't know exactly when it'll be on air... probably springtime too. Obviously, I'll be sure to let you folks know as and when.

Of course there's a Christmas Special on Radio 4 on Monday at 6.30. How that recording has been wrestled down to thirty minutes I'll never know. But it has and I think it sounds great. I hope you can catch it.

Now... as I sometimes use this space to grumble about things I thought it would be more festive to mention a few things I really like instead. So rather than mither about the poor service I had out of Apple recently, let me recommend All Things Mac instead. This is only any good to you if you live in the South East of England and you're a Mac user (so that's about three of you) but they were fab. They were friendly and helpful and went out of their way to give me advice that saved me money and earned themselves nought. They could have solved my problem and made a few quid... instead they chose to give advice and not make a penny. Of course I'll be using them again as a result and I think they're smart enough to know that longterm customer loyalty is worth more than a few quid now.

Here's something else I recommend. Gold

by Dan Rhodes. I love Dan Rhodes and this book - which had sat unread on my shelf for yonks - is up there with his best. It's just utterly charming. It's elegant, delicate, wry and absorbing writing. (I loved The Little White Car

too and it's just occurred to me that both books have female protagonists... which strikes me as unusual for a male author. Mind you, I'm not sure why that it is. Noone thinks it odd when a woman like JK Rowling puts a male character at the heart of things do they? And no one even bats an eyelid when a computer programme like DanBrown2.0 attempts to put a human being into its "stories". Hmmm.) 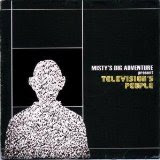 I recommended this album, Television's People

back in October too... but it really is fab so I'm doing it again. Grandmaster Gareth - the driving force behind Misty's Big Adventure - did me a huge favour by writing a special song for an extra on the Are You Dave Gorman DVD and I'm thrilled that they've now done the theme music for the TV version of Genius too. It's such a ridiculous thrill being able to work with a band that I'm a huge fan of. What a silly and exciting world this is. Anyway, I can't recommend them highly enough. 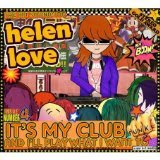 Talking of bands I'm a big fan of and who have written songs for my DVD extras - and I think you'll find I was - this Helen Love album, It's My Club And I'll Play What I Want To

, came out back in February this year. They're fab. It's fab. I love Helen Love and you should too. What's that, you say? You do? Oh. Great! Right, that's a book and two CDs... so here's a DVD. It's from Robin Ince who is one of the finest live comedians I know. Not only is he a brilliant writer and performer himself, Robin is one of the unsung heroes of comedy - or at least a not-sung-about-enough-hero. He curates fabulous nights in strange venues and has gone out of his way to foster a creative environment that allows comedy to expand beyond the rather rigid boundaries imposed on it by most pub-bound circuit-gigs which, while perfectly good in and of themselves, only really allow for a procession of gag-merchants with 20 minutes a piece. The comedy world is hugely enriched by his presence. The DVD is released by a company called Go Faster Stripe who specialise in promoting comedians they love but who aren't necessarily going to have their work advertised all over TV at Christmas or on a rack at the front of HMV. If you're really interested in live, UK comedy, you'd do well to peruse their catalogue... there's some fascinating stuff there.

Crikey... look at that for unbounded positivity! It's all stuff that has made my life more colourful and enjoyable one way or another and even if none of this is for you - I don't know, you might be a PC user who doesn't live in the South East and who hates whimsy, elegance, beauty, charm, wit, excitement, flair and anything thought-provoking - well, the wider lesson is surely that somewhere out there, there is stuff that will excite you as much as this stuff excites me. Seek it out. Then tell your friends.

To round things off - and to add a seasonal note - here's an old video I found on youtube from the aforementioned Misty's Big Adventure. It asks the question we've all wanted to ask before: Where do jam jars go at Christmas time?

Thanks for the recommendations. I used to enjoy your monthly book recommendations on your old news page so it's good to see some more again and I hope you'll put up a few more next year.

Have a great Christmas!

Dave, You are the thing that I tell my friends about because I think you too are a not-sung-about-enough-hero. Of course that means I never get my DVD's back to watch myself. UKTV History is my other cause.

Have a great Christmas this year.

I must commend you on your use of the word "yonks". Very satisfying. Happy Christmas Dave.