Time to fall over. 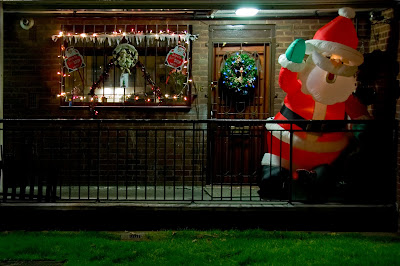 We recorded the Genius Christmas Special last night... in what turned out to be a marathon recording.

I think we ran nearly an hour longer than our normal shows... and I'm aware that my energy levels were dropping by the end of the night.

I thought it was a more rambunctious show than normal but all of the punters were great, as was our special guest, Lee Mack... and the diversity of the ideas was lovely too. It should definitely make for a fine show... but I wouldn't fancy being the one who has to cut it down to thirty minutes. You can judge for yourself when the show airs on Radio 4 at 6.30 on December 22. (It's repeated on the Sunday after Christmas too.)

I've spent the last two or three weeks trying to shake off an annoyingly persistent cold. I tend to get better as the day goes on... but then wake up each morning feeling like I'm back to square one. My normal reaction to a cold is to exercise. I like to tell my body that I'm here and I'm fighting... so I've been cycling to Genius HQ each morning. Someone who seems to know what they're talking about has recently told me that it's the wrong thing to do and that it lowers the immune system... but by the end of a five mile bike ride I feel so much better than I do after cooping myself up on the tube so I keep doing it.

There was one day last week when I did a morning in the office, an afternoon at home, a gig (yes, my experiment with unadvertised, short notice, short sets of stand up is ongoing) at the Albany on Great Portland Street, another gig at The Kings Head in Crouch End, returned to the Albany to see a few friends and then returned home. I reckon that added up to something like 25 to 30 miles of cycling although the hills around Crouch End made it feel like more.

By the end of the day I was feeling the full smugness of a cyclist. Not only had I done my travelling in about the same time as the tubes and buses would have reasonably got me from A to B (to A to C to D to C to A) but the exercise left me feeling really healthy. I felt like I'd conquered my cold. My lungs were full of oxygen instead of the radioactive phlegm I'd been growing accustomed to... I really thought I'd won.

Boy did I feel shit the next morning. Wiped out. You can't win. The only thing that makes me feel better in the short term is some exercise. But the next day it seems to have made things worse. So I get on the bike once more... and feel better. Only to be worse still the next day.*

Anyway... last night's show was my last work for the year. I've been trying to fight the illness for long enough to get that out of the way. Today I feel completely wiped out so I think it might be time to give in to the cold and let it take me down. I'll emerge on the other side. Hopefully before Christmas.

*You have no idea how hard it was to resist the obvious, "it's a vicious cycle" pun.
Posted by Dave Gorman at 3:04 PM

*but you DIDNT resist!

Get Well soon, most people have a cold now I think(me included).

You haven't got reindeer flu have you?

Might be worth getting it looked at by a specialist just in case.

I used to do the same thing for my shelfstacking job, as a result I can now put "capable of working whilst unconscious" on my CV.

...haven't gotten any jobs since though.

Hope you better soon Dave and the man flu clears up

Bollocks to lowering your immune system, you're not in a third-world country. A virus will last as long as it lasts. Best thing you can do is whatever makes you feel better in the short term.

Also, hot lemon/honey/ginger/garlic/whiskey drinks (although I usually have the whiskey drink separately).

Well done last night, It was a great evening. The running over meant we had to wait ages for a train home, but we totally didn't care as we'd had such a good time!

Given the phlegm surely you should go for the extra double pun of "viscous cycle"... I'll get me coat :-)

Exercise will slow down the recovery of most illnesses as your body needs to concentrate its resources on fighting whatever it is rather than pumping blood to muscles etc. Its why you feel tired when you get ill, its not some magic little buggies infecting your brain to make you tired, its your immune system that makes you tired so you'll slow down giving it the ability to fight the buggies.

Exercise makes you feel better as it releases lots of endorphins, giving you a natural high, but in the mean time the disease has been free to run rampant on your system.

Also, keeping yourself warm helps as cell division increases in speed the hotter you are (hence fevers), meaning more white cells are produced. Breathing in all that lovely refreshing cold air may not help :)

Good recording - but I did miss the Archers!

Have a nice Christmas.

I've been on the Max Strength Lemsip. Despite absolutely hating their tv adverts. I feel loads better for it though.