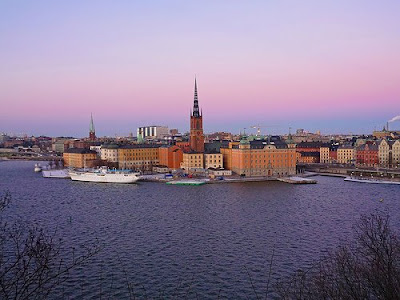 I've been away for a week to start the year. I spent a few days in Stockholm with some friends who organised a most splendid New Year's Eve before heading to Copenhagen for a few days alone from where I also took a day trip to Malmo.

I've eaten well, read lots and taken hundreds of photos. I decided not to take a laptop and to go without the internet for a brief while also. I thought I might regret that decision. I didn't. It felt good to cut the cord.

Of course I now have a few thousand e-mails to read and a load of other things to attend to... but that's okay. I feel relaxed and unrushed by life. Hello 2009.

Of course the first thing I need to do - and that I highly recommend you do also - is mosey on over to the Steve Lamacq page at the 6Music website and cast a vote to get Helen Love's Calm Down Dad on the rebel playlist (You have to scroll right down to find it.) Go on. You know it makes sense.

I don't know if I was just unlucky with Copenhagen - and I am aware that January isn't the best time of the year to be visiting that city - but the sky was permanently grey and the place had a somewhat dour edge to it. Stockholm might have been colder but it had crystal blue skies and Malmo - only a 30 minute train ride from Copenhagen - was similarly blessed. In fact, having spent just one day walking around freezing cold Malmo, with the sun bouncing off the frozen edges of the Øresund (or Öresund depending on which side of it you hale from) I ended up with a sun-burnt brow and frost-burnt thighs. The only thing that got burned in Copenhagen was my wallet.

Still it was really some solitude I was after and I'd packed a load of books to keep me company. I can highly recommend God is Not Great: How Religion Poisons Everything

by Christopher Hitchens. (Obviously I trust a lot of people will see the title and know it's not for them... although, y'know, it is good to challenge yourself sometimes.) Anyway it's really energised, funny and full of righteous indignation that means it really zips along.

And if a book about the lack of God doesn't appeal then a book about a man who thought he was God might. The Damned Utd

by David Peace is a novel (the book describes itself as "another fiction based on another fact") about the 44 days that saw Brian Clough as manager of Leeds United. He makes for a fantastic protagonist; proud, self-possessed and yet fragile and haunted. I love the chutzpah of taking on such a slight slice of life and I found the repetitive use of language beautifully hypnotic. Fabulous.

Right. I've voted for Helen Love. Now I'd better read some of those e-mails.
Posted by Dave Gorman at 6:07 PM

I voted for Helen Love too. But then I would.

I love The Damned Utd, the dovetailing timelines and the transfer dealings drinking and the utter hatred for Leeds United really was hypnotic, it just swirled and swirled into a tornado.

I found Copenhagen to be a bit boorish too, even in the summer. There's so many nicer places in Scandanavia, as you now know well.

I have also read and liked The Damned Utd. You know they're making a film based on the book which will hopefully be great as well. I also find the timing of this mention very apt with Clough jnr. having just taken over at Derby.

I must admit I too haven't read God Isn't Great but will add it to my (ever increasing) to-read list. If it's as good as The God Delusion it should be fascinating.

You weren't unlucky with Copenhagen Dave, it was just the time of year. I was there first week of last March, and had a pretty similar experience, except for one day of beautiful late winter sunshine, which was spent walking round Nyhavn, the old fortress and Christiansand. I considered the day trip to Malmo, but thought I'd leave that for another trip. Unfortunately, at the time I booked, I was unaware that the Tivoli only opens between late April and early October, except for special concerts etc. One bonus was the modern art museum in the suburb of Ishoj, 20 minutes train from the main station, and would has been recommended to anyone I know visiting Copenhagen.

Hey! I love Helen Love too. I love the Googlewhack song on your DVD. I shall vote.

Is there anywhere on the Internet I can go to vote for you, Dave? Apart form Hot or Not...

@Jack: I much preferred it to The God Delusion.