From L to B and back again 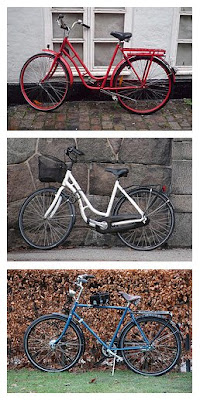 Having announced this tour (which is really a long bike ride with gigs added in) I've been inundated with questions. The easy questions have been about why I'm playing where I am... answer: because it's a big bike ride with a gig every night, but the others haven't been so easy.

Amongst the oft asked Qs are things like, "Are you planning on filming the show?" and "Have you got any plans to perform it after the tour?" The answer to these is no. But then people go away convinced that I'm not going to perform the show again and certain that the show won't be filmed. Every answer makes things seem so definite when the truth is that I'm a disorganised old thing who hasn't made any plans at all. I haven't thought about such things yet... the tour is a long way off. I probably will perform the show again... after all, it's not a show about the journey so there's no reason why not. But that's not the same as having plans which implies I have some secret dates in my diary that I'm not revealing. I haven't.

I've also been bombarded with advice and offers of help from people which is really lovely and touching. People with local knowledge are suggesting routes I should take and recommending places to stop along the way and so on and quite a few people have offered me places to stay. Quite a few more have asked if they can accompany me on one of the day's cycling. It's really been quite overwhelming and I'm very grateful for all of it... but I'm left feeling all the more disorganised because I simply can't keep track of it all. Right now, my priority is getting the show together and I haven't stopped to think about the logistics of the ride.

I'm worried that if I encourage people to accompany me I'll have a duty of care towards them. Am I responsible for their safety on the road if they're doing a journey they wouldn't have done but for me? I'm happy to take responsibility for myself but being responsible for other people fills me with dread. I don't want to be a tour guide.

And I can't decide whether staying with strangers would be more or less relaxing than B&Bs, hotels and the like. It appeals to the hippie minstrel side of me that is part of the reason for touring in this fashion in the first place but I have no idea what I'm going to do.

The end of August is just too far away for me to contemplate these details and the fab e-mails offering route-advice that I won't need til then have already been swept off the front page of my inbox to places where I'll struggle to find them. It's the kind of advice that my head doesn't cope well with at long range but loves when I can act on it with some immediacy.

I'm not really very au fait with the mobile internet. I've never craved a phone that has that kind of facility because the idea of being followed by my e-mails when I leave the house fills me with dread. But for this journey it might be a useful tool. If I was getting advice about routes the night before I needed them it'd be fantastic. On the day I'd know if I fancied company. After a night in a bland hotel I'd know if I fancied a change. At six months notice these things seem impossible to even begin thinking about. In the moment they should - I hope - make complete sense.

Incidentally, somewhere at the back of my mind, when I thought about doing this was the fact that I had previously done the London to Brighton bike ride for the British Heart Foundation. It's a roughly 60 mile bike ride and having done one it gives me confidence that I can do more. Whether or not I can do 33 of them in a row I've yet to find out. And the London to Brighton event creates artificially friendly conditions. There are nice, helpful marshalls lining the route, keeping you and the traffic apart and you're surrounded by tens of thousands of other cyclists who are going the same way. That won't be the case when I start my ride. The reality of what I've taken on is starting to hit me - and having announced it, it feels ten times more real than it was. Oh well, it's too late now.

But it occurred to me that I had no good reason not to sign up for the ride this year. And as a training exercise I think I'm going to try and cycle home the next day. I'm going to have to get used to intercity cycling between now and the tour so I might as well. If you want to sponsor me, (officially for the first ride and secretly for the next day's return journey) then please visit www.justgiving.com/dgorman
Posted by Dave Gorman at 11:54 AM

Have you thought of asking one of the mobile broadband providers if they would sponsor you? After all what would be a better advert but you going around the country, literally on your bike.

Queue at least one racing shirt with scary Lycra bits and large logos.

I loved the London to Brighton Bike Ride last year, and I had no hesitation in signing up to do it again this time round.

As Dave said, there's a certain friendliness to it - you can have a quick friendly word or a lengthy chat with any the thousands of bikers and there's a wonderful sense of achievement lining the route.

The finish line felt like completing Tour de France after freewheeling all the way down from the top of Ditchling Beacon (the toughest part of the course, an assault on the South Downs). It's quite a moment with hundreds of onlookers applauding your finish.

Would recommend it to anyone, as it's one of the most enjoyable and laid-back charity events you can do. It's both a challenge in having to cycle 54 miles, but perfectly 'doable' with a bit of training.

Good luck Dave, hope to bump in to you along the way (not literally).

You could just consider a residency at the King's Lynn show and cycle the local flatlands.

Loving your work Dave. Good luck with it all.

I'm keen on stats and in an attempt to take your mind off of the trip, I've crunched a few numbers

I've noticed that since peaking in 2006, your Average Blog Count (ABC, for ease) was around the one every 3.9 days mark.

I'm sure you have your reasons, internet access and work commitments to name but two, but it's fantastic to see that you are averaging a record one every 3.5 days so far in 2009, even though you seem busier than ever!

Can I suggest you train initially to get up to 100 miles then subsequently drop down from that with the end point being able to comfortably do multiple 60s. If you google something like 'century cycle training plan' there are a few decent training schedules to get you up there in 12-16 weeks.

We've already got tickets to see you at Sterts on Aug 31st! At least it'll only be your second night in, you won't be too exhausted!!

have a look at this guy who cycled in the 1950's to the artic circle. the film maker Matt Hulse is trying to get the film of the ground