It's been a busy week. On Monday I was doing Frank Skinner's Credit Crunch Cabaret at The Lyric Theatre. I was a little bit concerned to be closing the show. The brilliant Ian Broudie had closed the first half and I was pretty sure we were occupying each other's slots on the bill.

It was also the first time I've ever had to follow a burlesque act (the really quite delightful, Missy Malone) but having dipped my toe back in the stand-up waters late last year and enjoyed myself and now having committed to an autumn tour... well, I guess it was time for a proper test. And a thousand people in a proper old West End Theatre is as good a way as any to find out where you are. I loved it. Those theatres are so much fun to play. I even sorted out a tiny bit of new material too. Hurrah.

(Of course, I do realise that nobody's reading this bit. I've invoked Blogging Rule #28: if you link to a burlesque dancer's site, don't expect anyone to read the rest of what you have to say. Oh well.)

I went out to celebrate after which proved to be a bit of a mistake because I felt the effects on Tuesday when I had to head to Newcastle for the next America Unchained book event.

As well as promoting the book I've been promoting the imminent arrival of Genius on TV and as part of that I've been writing a couple of newspaper articles on the subject. I was under the impression that one of them had to be delivered by the close of play on Friday... but late on Monday I discovered that the deadline had moved to Thursday which threw my plans out of whack somewhat.

Instead of spending Monday afternoon prepping for the gig at The Lyric I devoted it to writing but by the time I had to leave for the theatre the work wasn't done. I had Genius related interviews all Thursday so I knew I wouldn't have a chance to do any of it then and the Friday morning I'd set aside for the task was no longer of any use to me. So I took my laptop with me on the train to Newcastle and tried to get as much of it done as possible then. And a hangover - even though it was only a slight one - wasn't the best accompaniment to that.

I knew there wouldn't be time to finish it on the journey but I was pleased to get a sizeable chunk done. But it left me feeling frazzled and fragile when we got to the shop in Newcastle. The staff there were great though and there was a lovely crowd who were really up for it so I got a bit of an adrenaline kick and the reading ended up being really good fun.

It would have been lovely to spend a bit of time in Newcastle. In an ideal world I'd have brought my "proper" camera with me and set out into the darkness with a tripod to do some late night photography because the city's architecture and liveliness would be great for some night-shooting. Instead I headed straight back to the hotel to watch the football (glorious) and continue the writing (headachey) and contented myself with pointing my point-and-shoot snapper out of the hotel window instead. 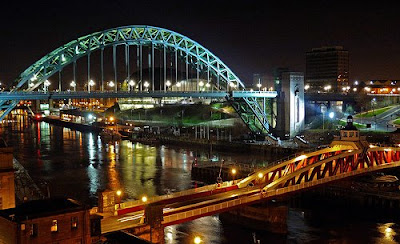 The schedule that was laid out for the next day meant that the article simply had to be finished that night or I'd miss the deadline so I worked on, finally finishing it at 3am.

Wednesday was already set to be an especially long and arduous day, but now, with a distinct lack of sleep it was only going to feel harder. I was doing another reading that day - this time in Lincoln - but the book's publicist and the Genius publicist had conspired to ensure I had seven or eight appointments to make before that. I did stock signings - which means I signed books but not as part of any event - in two Gateshead shops and two more in York as well as doing various phone interviews and popping into a local radio station along the way. It was one of those frustratingly bitty days where there was never a significant enough break in the schedule, just the odd twenty minutes here or there so that, apart from the hotel breakfast, there was never time to have an actual meal and we (that's me and Ed Publisher by the way) survived on snacks and sandwiches all day.

The magic recipe of a warm welcome and an engaged and interested crowd meant the dose of adrenaline was administered and the Lincoln event was just as much fun as the one in Newcastle. (The fact that all four recent events have been so different - thanks to the Q&A sessions - is what really makes these events enjoyable to me)

But the moment I came off stage (or rather, off-shop-floor) I felt my energy dying completely. Lincoln must be one of the few British cities I've never visited before and I really didn't know what to expect of it. It looked beautiful. But as with Newcastle there was no chance to really appreciate it... this time because my Thursday schedule of Genius-related interviews meant I had to be back in London for the morning.

Unfortunately there doesn't appear to be a direct rail connection between Lincoln and London and there certainly wasn't a railway route back home at that time of night so instead we had the extravagance of a car home. My head didn't say hello to the pillows til the wee small hours.

Five hours sleep followed by three train journeys, five cars, four stock signings, three interviews, one reading and no meals. That's not good. And at 10 the next morning I was in the centre of town for more interviews.

I think I slept for much of Friday. Instead of spending the day writing the article - as originally planned - I spent it recovering from the lack of sleep endured as a result of writing it on Tuesday night. Which should mean that everything kind of balances out in the end. But three nights without decent sleep followed by one long day of rest never quite does that does it?
Posted by Dave Gorman at 4:34 PM

Sorry, what was that you were saying?

The wonder of Firefox, I open your burlesque dancer lady in a seperate tab, and continue to read on.

I feel for you Dave. Have to do a 1000+ miles next week, whilst supposedly finding a new house to live in.

How long did it take to get all that glitter out of your hair??

Wow, she's pretty. And tiny-waisted (it cinches to 20" apparently. I've just checked that on a tape measure... where do her organs go?).

I too middle-clicked the burlesque dancer link and continued to read. Good old Firefox...

Blogger Rule #29 Gals read your blog too. Now if you had followed dancing Hugh Jackman, well thats another thing.

Fab shot of the Slug through the bridge

Well you linked to a burlesque dancer's page and it only took me six hours to return to your blog. Sometimes, miracles do happen.

@Jenny Harvey: No worries, it was a 'really, she can do that?' sort of fascination that kept me not reading Dave's blog.

And I agree about the dancing Hugh Jackman. Please Dave, post more things for the ladies (other than cervix awareness websites...)

I am so so so gutted because I've been waiting years for the opportunity to meet Dave Gorman and when he actually visits my home town of Lincoln I knew nothing about it.

Totally my fauly for not keeping up with the blog but at the same time for the bookstore for not advertising it in the window. I walk past it every single day, on weekdays at least, and I never saw a thing. Gutted! I'll hopefully get to the Nottingham one on the 1st April though.

I usually read this blog quite often, but I've been away, and am now trying desperately to stay awake to a reasonable time so the time change doesn't kick my ass. I was just scrolling through the entries I missed and saw the fantastic picture of Newcastle and the sentence "Instead I headed straight back to the hotel to watch the football (glorious)". Both of which made me happy because I love the bridges in Newcastle, and I know you're talking about the Liverpool result. And it was glorious.