Well, I'm glad I saw Lizard Point in the sun the day before because this morning I awoke to see a grey, rainy Cornwall waiting for me. It's not as pretty that way and it's not as easy to get on your bike and cycle either. But the first ride, and the first show of the tour are under my belt and it feels good.

Here's a map of today's ride: 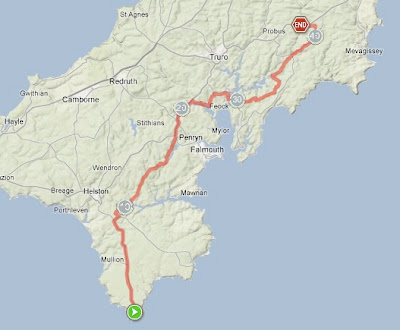 And here's a graphic showing the breakdown of up and down hill:

There were some thigh burning climbs and some fabulously exciting descents also.

According to my Sat Nav I cycle 45.71 miles today although when I plugged it into mapmyride.com to generate these maps and charts it decided it was more like 43. I'm going to believe the Sat Nav. It also tells me that my maximum speed was 53.3 mph. I can't quite believe that one although like I say, some of the descents were fabulously exciting. Oh sod it, I am going to believe that too.

I'm glad I wasn't depending on my Sat Nav to actually show me the way because there were several times today when it dropped out of contact with the mothership and I would have been guessing. I had human Sat Navs called Richard and James guiding me and they did a fine, fine job. Actually, while the two of them guided me the whole way from Lizard Point to Grampound we were joined by a friend of theirs, Pete, for a good long chunk of the ride and then also Tom. They both peeled off at different points along the way but for a large part of the day we were a five strong group which made for lots of cheery chat. Given the weather, setting off alone would have been a bit of a bleak and demoralising experience this morning and that's not the way to start something like this. As it was It was they were thoroughly entertaining company and despite the many hills the ride was definitely more fun than anything else.

Yesterday, someone asked me on Twitter if I was planning a big send off or not. I found myself confused by the question. The start was always going to be a 38 year old man cycling uphill and I wouldn't know how to turn that into a big send off. But to my surprise a small number of strangers did gather in the cold and the drizzle to wave us off from Lizard Point. There may have been only four of them but it was really appreciated and it was another, lovely boost to my morale - so thanks for that.

I'm about to turn in for the night - after a lovely but exhausting first show. I tried to add a couple of photos - of Richard, James, Pete and Tom etc. but my internet connection is so scrawny it won't allow anything so large to pass through so they'll have to wait for another day.

Congrats on getting started Dave, all the best for the rest of the tour.

Hi Dave.
I am one of those 4 strangers who braved the weather to wave you off.

It was a pleasure to meet you and no problem at all to cheer you on for your grand adventure.

There's a few pictures on our blog (www.velocake.co.uk) and on Flickr too - & yes, I did get a pic of your bum in Lycra.

Good luck with the rest of the tour.

The very best of luck, Dave. I've got massive respect for you even attempting this; I'm always complaining about cycling eight miles a day to and from the office, let alone 40+!

Isn't there a Chinese proverb about a cycle ride of 1500+ miles starting with a single turn of the crank? If not, there should be; they bloody love bikes in China. Congratulations on your first step Dave; may all your hills be down, and without too many twisty bits so you don't even have to keep braking.

cracking show in an intimate venue,homemade cakes and booze served by the local counciller!good luck with the rest of the ride/shows.nick and cat.

@Kitty
Thanks for posting your photos, you made me laugh. Very funny!

Good luck Dave, can't wait to see you at Preston.