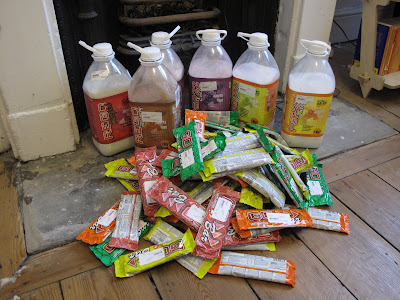 It happens every time but it always takes me by surprise. At some point with every project there's a point at which a form of obsession takes hold, when those parts of life that don't relate directly to it start to feel like an imposition or an inconvenience even when they're nothing of the sort.

That's now how I feel about the tour. About both the ride and the show. I'm doing other things but there's a mild panic in the background of my brain telling me that I might have forgotten this or that. Or the other. I will shortly be setting out on the most intense month of my life. The ride alone would be a challenge. 32 full gigs on the bounce would be a challenge. The two combined means there will be little or no respite. I'm looking forward to it. And then I'm not. And then I am. And so on.

This afternoon I bought a large amount of food and drink. Energy bars. Sports drinks. Drinks to load carbs, replace salts and, um, something else. Drinks for before, during and after. I've probably over done it. But it seemed better than under doing it.

(Hmmm... can't help thinking that this picture makes it look like I have some kind of sponsorship deal. I don't.)
Posted by Dave Gorman at 3:29 PM

I'd have to buy these the day before I set off, otherwise I'd eat them all in the run-up and set off looking like a blimp on wheels.

I used to be a cycling journalist years ago and I seem to think that little pots of rice pudding and/or compressed date blocks (you used to be able to get a sort of date brick for baking with) were the best energy foods for cycle touring.

I'd suggest starting on this 'diet' a week before the start of the tour. You want to get used to the change. The last thing you want is the runs while cycling.

I prefer my cycling carbs to come in the form of cake and doughnuts. Any additional salt needed can be replenished at the chip shop.

Lol, ahhhh, my bad, that’s food! When I saw the picture on my RSS feed I thought it was some set up for an art project.

Good luck with the challenge ahead. I know I couldn't do it... I'd die on stage both ways if I tried.

I don’t know if it’s good advice but I remember when Eric needed something like this done, he ate a Banana :)

I just this week went cycling after a pause of around 3 years, and even the shallowest incline was evil on my legs. I know that you are obviously more prepared than I was, but I still really pity the cycling side of things for you. Good luck!

At least you'll get your daily dose of artificial colourings (or not?!)

I know this is really off track but I'm just reading Are you Dave Gorman (it's rather funny) and got this email this morning.

I wondered if you'd got the chap about half way down?

Sorry if you have or someone else has pointed this out to you, but there you go, I've got the bug now.

Also, if you'd have done it today, Facebook would have made it all pretty quick and easy to find people.

Anyway, good luck with the cycle. I may see you in Andover if there are any tickets left!

@Adam: Not sure about the artificial colourings... my guess is that the drinks might have some but the bars maybe not. I'll see. I have no idea if I met that particular namesake... there's not exactly a lot of information on the page apart from his name and it was ten years ago now so... well, who knows.

Not sure there are tickets left in Andover (there might be) but for sake of clarity I feel obliged to point out that I'm not cycling there. It's not a part of the tour as such... I'm there for warm-up gigs, to lick the show into shape etc.

@dave and adam: you did meet that particular namesake at one of the last shows in NY in 2001 - number 109 if I remember correctly.

Funny how our paths meet again electronically as I recently started subscribing to your blog and, poof, there is a link to a newsletter with my smiling face and our name.

Good luck on your tour and perhaps we'll meet again!

@dave: ah... then it's good to make your acquaintance again. Hope all is well.

What a haul! As the other commenter posted, do test them beforehand. I was training for a marathon last year and tried a different powdered drink only to react badly and my throat closed up for a bit, scary! I'm sure you're more robust tho! Hope the planning goes well! Good luck!
-Cas

Don't over do the energy stuff, it will make toilet time 'interesting', tty and use it for emergency energy bonks, eat as much normal food as possible.

The recovery stuff is brilliant tho.