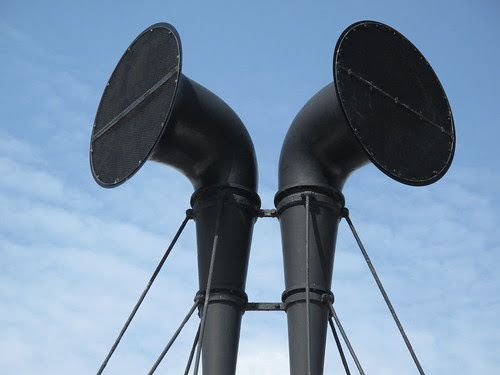 I took part in a recording of two episodes of Radio 4's Just A Minute yesterday at Derby University.

That's the third time I've done the show - having done two episodes a while ago in London and a single episode at Hay on Wye last year - and it remains as damnedly difficult a game to play.

It felt like I spent the whole of the first show pressing my buzzer and trying to challenge only to discover that I was pipped to the post by my fellow contestants.

Early on there were plenty of times when I'd be sitting there thinking, 'oh good... I know exactly how I'll handle this subject' - but every time that was the case, I'd be unable to mount a fast enough challenge. After a while I stopped trying to think about what I would say if I got in and suddenly, I found myself faster on the buzzer and occasionally able to steal the subject. Next time I play - if there is a next time - I'll do no thinking at all and just let my thumb buzz when it wants to.

It was a hugely enjoyable evening with a lovely, fun audience. Tony Hawks, Josie Lawrence and Justin Moorhouse were all on fine form... you only have to add the remarkable presence of Nicholas Parsons to the mix and it transforms into something quite special.

Hehe, sounds great, when is the show being broadcast?

Tony Hawks... it has been ages since I've heard his name crop up but his books sit next to yours on my bookshelf :) Did you get to chat to him behind the scenes? (I don't know how cut throat the comedy scene is, you all seem such friendly types) If you did, did he mention if he's still doing the Round Ireland With A Fridge movie?

Sounds fun, is it possible to listen to the show via webcast or something like that?

JAM will be on BBC Radio 4 later in the year and you can get via the electric wireless or the BBC web page.

If you want to get points you will need to suck up to Nicholas Parsons more than that!

The show's being aired on BBC Radio 4 in January!

@Bel: I really enjoyed your film on Youtube - thanks for posting the url. I've listened to JAM for about 30 years (although I've never called it JAM until now!) and it was great to hear the post-show reflections of the five participants, a first! And I learned something new - never take advice on how to live your life from a 38 year old bearded man - or anyone else for that matter! (Actually, I knew that already) :¬)

After listening to JAM for years, I think the secret is trying not to be competitive (or not be seen as competitive). The harder you try to win, the harder other panelists will hammer you on technicalities, so it doesn't really pay to piss people off with the buzzer... unless you use it to crack a good joke. Clement Freud won more episodes than you might think!