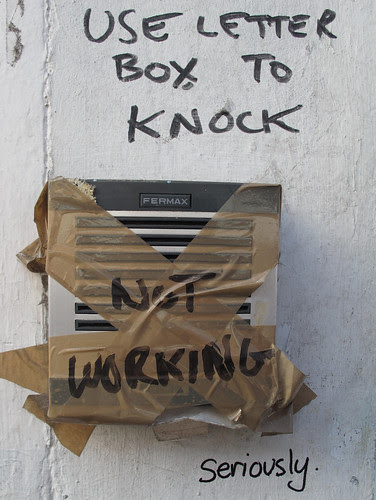 I'm enjoying the Sunday morning radio show immensely. I think we clicked pretty quickly as a team on air and off but even over the space of three shows I think we've gelled more, which means that while we've increased the amount of content to each show they've also sounded increasingly relaxed.

To my mind the podcast is worth listening to just to hear Martin's musical contribution at the end. To have all your e-mails and texts summed up in song by the end of the show seems like a remarkable gift to me. I don't know how he does it. To really ram home how musical he is, he's performed the song on a different instrument each week so far. That's just silly.

I can never remember all the e-mails and texts we've received during the show so there's always a moment during his song where I suddenly think - "oh yeah... there was that one too!"

I'm pretty sure he's actually getting them all in.

In the last couple of shows I've done some (silly) found poetry (what's that?)... the first was constructed using the opening lines and subject headers from spam e-mails found in my junk folder and the second was made up of sentences found on the profiles of girls advertising on a couple of Russian Bride websites. I doubt we'll do Poetry Corner every week but it's been an enjoyable part of the show so I'm pretty sure we'll do more. If you have any suggestions for good, unwittingly funny, source material, let me know. (You can find out the sort of thing I mean by listening to the last couple of shows and hearing the previous examples.)

Of course that's only one of the ways you can get involved in the show. Some of the jingles we've been sent in have been superb. There seems to be a nice steady trickle of them now - but do keep them coming. Of course there are loads of other ways you can get involved in the show. For instance, there's always a talking point that we encourage you to contact us about. The story we heard this week - from a man who'd been going out with a girl for 5 years without knowing she wore false teeth was a classic.

Oh... and if you don't listen live but do get the podcast don't go assuming that you can't join in. If you're listening and thinking, "Oh... I would have told them about the time when I...." then send us an e-mail. We'd like the podcast listeners to feel involved too.

Here's the link to the podcast on AbsoluteRadio.co.uk And of course, it's also available on iTunes.

Dave, I seem to be fated to having to listen to the podcast while walking the dog, instead of enjoying the live glory and interactivity (is that a real word?) of it all- marshalling at a duathlon in week 1, arguing with my wife about listening to commercial radio on a Sunday morning in Week 2, and running a 10Km race in week 3 - sorry, but I seem to no proper sense of priorities! Still, the podcast is very enjoyable, especially Martin's wonderful songs. As someone who plays only one instrument, badly, I am a little bit in awe of multi-instrumentalism...

The "found poetry" sounds interesting... trust you are familiar with the Demetri Martin poem constructed using every single word found on the back of a beer bottle?

@Scottish Nature Boy: I dare say Martin will do a song with the harmonica one day. He'll be annoyingly good at that too.

@Craig Jones: I am familiar. This is very different. I'm not cutting up word-for-word... I'm taking sentences that are recognisable to us all but come from low-but-familiar sources - and then treating them as if they came from somewhere high falutin'.

I have very much enjoyed listening to the podcasts, I find myself walking to work literally laughing out loud, and receiving some very odd looks from passers-by!

Hmm ... I wonder about the "would like to meet" adds in the Lite. They always read funny to me. Though I suppose it's similar ish to Russian Brides, but with more abbrieviations.

Perhaps the way blogspot has a "next blog" button you could do something out of the title or first line on top post as it's quite random ....

This whole discussion reminds me of the lyrics to "Step Right Up" by Tom Waits, which is based entirely on advertising and saleman phrases. It's a riot and a classic! See the lyrics here: http://lyrics.doheth.co.uk/songs/tom-waits/small-change/step-right-up.php but better still, go listen!

Thought for some reason there was no Dave Gorman podcast because it's not listed on this page: http://www.absoluteradio.co.uk/djs_shows/shows/podcasts/index.html
(Maybe you could get them to update it)

So thanks for the link on you blog.