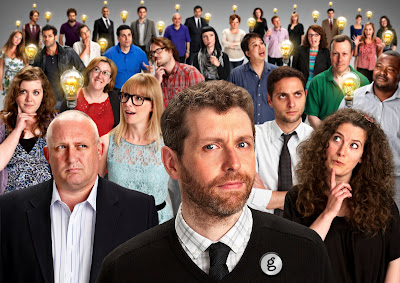 I'm delighted to say that Genius is now in the schedules. It's going to go out on BBC2 on Monday nights at 10pm.

It starts on September 27th.

If you came to any of the recordings then you know the show has a very different format to last year.

In series one there was some tongue in cheek pomp and ceremony with the guest in a throne and the potential geniuses entering on a revolving stage. With hindsight all of that was taking up time that should have been spent hearing more ideas, putting in some more actual content. We used to get through 4 or 5 ideas in a show - and because they were ideas that had been pre-selected, I always knew what they were and we pretty much always had a prop built for each one. It gave us some great moments but it also committed us to spending a certain amount of time with each and every idea.

We all wanted to make the show looser this time around. So instead of inviting 4 or 5 people to each show, we've invited 70. And instead of having one guest per show we've got two. And on one occasion, three because, hey, you can't have just the one Hairy Biker now can you? So the show has become more of a forum where every one of those 70 people can get involved and share their ideas and the guests can investigate some and dismiss others.

There are still a couple of things in each show where I know what's going on and we've built this or that - but by not doing it every time it's much less predictable. On the whole I think it makes the show much more relaxed, improvised & free flowing. In most episodes - in fact, I expect all of them - we'll hear from 20-30 people... that's more than we squeezed into the whole of the first series.

We've got a load of extras that we'll be putting up as online exclusives as the series rolls along. There's a behind the scenes video and a Genius Generator - a collection of ideas sent to us on video - up on the BBC Comedy blog right now.

woohooo - can't wait for the new series. Sounds like fun.

Last series nearly put me in hospital at one point after my laughing fit at you and Johnny Vegas testing out the conveyor duvet.

I can't see my friend Alistair in that photograph. I shall be very disappointed if he is not on the television.

I don't think anyone in that photo is a member of the actual audience. It's a studio shot to illustrate the show not a shot from a recording or suchlike.

Day before my birthday, I hope Pete will get a birthday mention.

I second blinkycrafts, wish I could get BBC2 where I am.

Any ways to get this programme outside of the UK?

Ah, the excitement begins!
I presented my idea at the Hairy Bikers filming, so here's hoping i've made the final cut!

@Mr TempleDene... the shows were recorded in May/June. There'll be no way of adding a birthday mention to anyone.

Auntie usually takes advantage of a second series to start selling the first on DVD - any idea if she's planning on doing this?

I feel sorry for the people without lightbulbs. It is like the advertising monkeys have preemptively decided they are not geniuses.

As much as I'm looking forward to the new series Dave (very much indeed), I'm actually commenting about the promo pic.

How suave, and slightly American, do you look?! Is it Photoshop, spray tan or have you been on holiday? I know you don't get colour like that from commenting on the darts!

Can't wait for this, just slightly disappointed that it's being shown at the same time as the inbetweeners. Not sure about BBC's logic to put this up against probably the most successful comedy around at the moment. At least there is iplayer.

Fantastic! Was just telling someone about this series a few weeks ago and can't wait!

Does what it says on the tin. Genius. Out on the narrowboat for two weeks soon, route now having to be planned to ensure a decent TV signal. Loving your work.