Well this is getting silly now...

Having only just got my head around the idea of someone pulling a muscle at the Guildford show (see my previous post) I was surprised this morning to see the following tweet about the Birmingham show.

I was curious. How do you accidentally headbutt someone in a theatre? I assumed he meant it was some kind of reaching-across-the-bar-during-the-interval accident rather than a during-the-show-and-sitting-in-your-seat kind of thing... so I asked. And this was the answer: 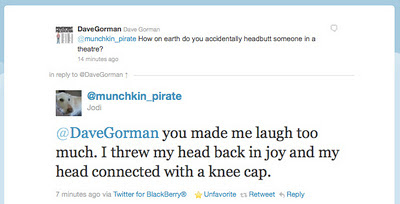 Another person hurting themselves in one of the shows. I was getting worried. But luckily, someone else has been in touch to tell me of the show's healing powers:

We shall call you 'Dangerous Dave' from now on. :-D

You've never made me laugh, so no danger of my being injured. If you know the names of any comedians likely to make me laugh so much that I injure myself, and the names of lawyers willing to represent me in resulting legal action, I would be very grateful.

I havent laughed so much in ages, you were fantastic in stafford, i can understand the injuries and the phlegm thing even though i do feel rather sick at the thought ha ha.