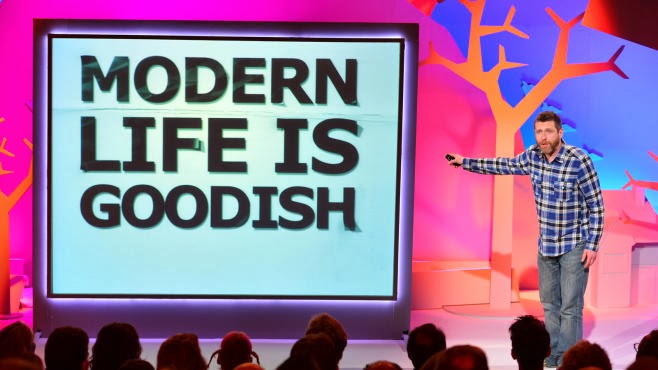 Now that Modern Life Is Goodish is being repeated (it's on Dave on Wednesday nights, just so you know) I'm getting a lot of tweets and emails from people about the show.

The most frequently asked question is: will there be more. And yes. There will be. It's been commissioned for two more series.

And series two is what I'm working on right now.

TV is normally a very cautious business. TV people like to record 90 minutes and edit it down to 60 because they figure that way things will be okay if they don't work. If you do things that way it means each bit of material has to exist as its own separate bit. And that makes things feel kind of, well, bitty. You end up feeling like you've had a series of snacks when what you wanted was a meal. I try to make shows where all the ideas join up. Often it's the way in which things are connected that's the point of it all. You simply can't do that if 30 minutes is going to get cut out of it later. So rather than doing stuff that might-or-might-not-work-and-it's-okay-because-we-can-fix-it-in-the-edit I try to just record a whole show that works. And so I try to do the editing in advance by road-testing the material in front of real audiences.

Which is why I have a batch of warm up shows coming up.

As you can see there'll be three shows in each venue. Each of those shows will be substantially the same - although I'll be making a few tweaks from night to night as I try to find the best way through that particular material.

Phew. I think that makes sense. I hope to see some of you there.
Posted by Dave Gorman at 11:43 AM

It's a shame all your warm-up shows are a little too far away for me, but I'm really looking forward to coming to see you in Sheffield at the end of the year. Now I just have to gently persuade my son to buy the tickets......
Good Luck!

Two more series - brilliant! Pity no shows over here in Northern Ireland though.

@Mandy Stuart: the warm up shows are all down south because they have to be. I have to get to them after a day in the office. Lawyers and producers from the show/channel have to be able to get to them after a day at work also. And in between each show I need to be writing. And for me, writing really means "building powerpoint" - something that isn't easily done on a train or in a hotel. If we did the warm-up shows further from home we'd have to be adding two days into the schedule for travel there and back as well as renting an office at the other end and paying for hotel rooms for 3 to 7 people. That would cost us a lot of money - not to mention time we don't have!

@Gareth Scott: see my answer to Mandy for why there aren't warm up shows in - for us - far flung places. But there is a Belfast gig on the tour, so, y'know... there are shows in Northern Ireland.

Hi Dave
Delighted to have secured three tickets for Wed 16th July. My 16 year old son, his girlfriend and I are all fans and are travelling down to London especially to see you and we can't wait. Just a couple of nagging worries you might be able to help with - how long do recordings take (we don't want to have to leave half way through for the last tube or anything so need help to make alternate plans for staying over if necessary) and also travelling so far with two teenagers, I hope I am not one of the "over subscribed" ticket holders....not sure I could find something else to do if we didn't get in! Anything we can do to make sure we can get in?!! Cheers Dave - Jo, Ben and Shannon

PS When I said we need help to arrange alternate plans - I simply meant on the timings front - I wasn't expecting you to pay for a hotel or put me up or anything lol!! Please don't put that in one of your found poems lol!!!

My 12 yr old daughter loved the first series and thinks you're great. Before I go ahead and book, can I ask would the live show be suitable for this age? Cheers, Daren

so excited to be seeing you live in worthing next month so glad to be living there! I love your shows :)

Loved the gig in Canterbury last night. It felt pretty polished. Not sure if you plan to use the third Found Poem, but it'd be a shame if it didn't get into the Series.