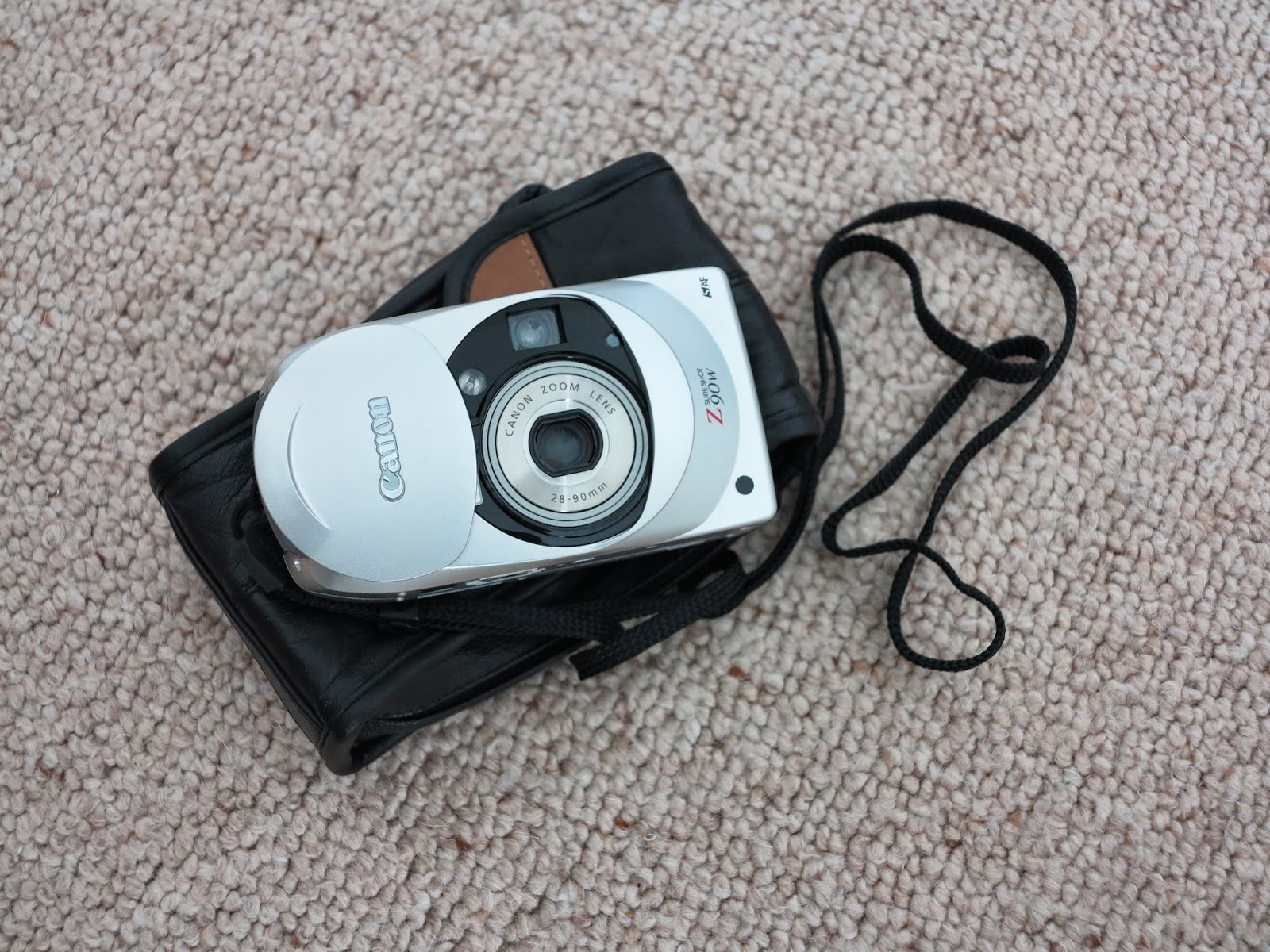 But for now... there are some initials on the case. If this is your camera, get in touch and let me know what those initials are and I'll work out a way of returning it to you...
Posted by Dave Gorman at 10:54 AM

This sounds like the plot to Danny Wallace's "Charlotte Street", perhaps it would be easier to track down the owner of the camera by developing the photographs!23

Obviously Modern Life is not that good(ish) for its owner.

@Don Carter well, if they were modern and used a digital camera this would be a whole lot easier!

Imagine if those photographs were of Alan Sugar holding a fifty pound note in an envelope.

@Jayne: I am imagining it. If it does then a) I've been done up like a kipper and b) you're either in on it or psychic.

Hey I was on a Brighton beach this weekend, but forgot my analogue camera*. Word of warning: Prepare yourself before looking at the pics - it could be a setup!

*I forgot to take it to Brighton, not from.

Melanie K - I was thinking exactly the same thing... very much like the plot of Charlotte Street!

One thing for sure it's not going to be a teenager.

You can get film developed onto a cd then upload the pictures that might help?

I can see the sequel to Blow-Up taking shape even as I type.

Is that a body or a flounder in that rock pool.

Good luck with the hunt, you may have to take it to all your shows for years to come just in case.

The most creepy outcome; you get the pictures developed and they are all of you taken over a couple of years.

Unwise to have the photos developed yourself. If they are 'objectionable' you will be legally responsible. Get the police to do it.

That should be the new name for your new show!

Not related to article but I had to send you this and I don't do facebook. Hope you receive this OK Dave. Just happened to watch old episode of "Genius" with S. Lee the other night and then saw this today. Prescient or what???
http://tinyurl.com/mkdb7fa
Virtual reality for chickens!!!

Strange coincidence I was in Scunthorpe earlier this week... where I found a penny abandoned on the floor outside an abonded old Woolworths store.

When I first saw it, it was just lying on a bench with a can of special brew heckling and wolf whistling single Mums only a short distance away with some 'colleagues' and so we watched to see if anyone came back, frantically searching for it.

There was nowhere sensible to hand it in to, as the nearest post office was over 100 meters away and there seemed to be little chance of it making its way back to its owner, so rather than leave it to the ravages of of a City Banker on his/her holidays, I thought I'd look after it and make best efforts to find its owner.

If it was a pound I'd have kept it... but it's a copper coin and that is pretty rare these days. Well not yet. There's a picture on one side of the coin, not sure if this is the owner, but she doesn't look like she needs the money.

But for now... there are some illegible initials on the case. If this is your coin, get in touch and let me know what those initials are and I'll work out a way of returning it to you...

@John It definitely isn't in the new book because that's already written. Nor will it be in the new tour.

But thanks for giving me a perfectly reasonable opportunity to plug both.

@Chris Elder: if the penny was capable of heckling and whistling you should take it to Britain's Got Talent or somesuch and make your fortune. It will be worth more than a penny. But beware... vimeo.com/50941741.

Better version of that lovely song.

p.s I meant I, not it. I was giggling to much at my own story to think hard enough about correct grammar!

Are you anticipating Scottish independence? No dates on your tour :(

@Mila Fojut a) Aberdeen is definitely in Scotland. b) I don't book venues, they book me. If I'm not playing somewhere, either they didn't want me or did and didn't have dates that worked or something similar. & c) Link

just a thought, the chances of someone blogging if they don't have a digital camera is a bit slim.

However fair play for doing this, if nothing else you will get a small buzz out of the possibility of finding the owners

It could be a young persons camera, I gave my daughter an old 35mm camera to mess about with. She is 8.

I'm sure there will be teenagers out there who like the retro camera thing.

If there is any more photos left you should use them before processing it. This way they get a lovely suprise when you give back the camera + photos to the surprised but elated owner!
Also you could use goggles creepy face search to hunt down the people in the film!
Detective mystery here we come!

Nice one for trying Dave. Good luck with the search. Many other people would have kept it or threw it away.

This could be owned by one of two people a) an old person who doesn't like new technology. b) a child who can't be trusted with digital. Either way I don't they'll be using the internet

@Lloyd Pearson you're not the only person to say this - I've had two or three people get quite agitated with me on Twitter saying the same thing. Some of them seem almost angry that I've made even the tiniest effort to find the camera's owner when - in their eyes - the camera's owner has no chance of seeing my post.

I know that the chances are slim. I get that. And that's why I've said that, if I get nowhere I'll develop the photos.

But the idea that young and old people don't use the internet seems to be a) wrong and b) irrelevant.

It presupposes that the only way of this working is if the camera's owner happens to be the kind of person who reads my blog or follows me on Twitter. That seems to be a very simplistic view of how the internet works.

Is it possible that someone will see it and think, "that's my Dad's camera" or "that's my daughter's camera"?

Of course it's unlikely. But the idea that the kind of people who use this camera are not only disconnected from the internet but are also disconnected from any sort of community/family who might be online seems most peculiar!

No one seems to be trying to guess the initials. I think it's AA. Or that may be just the battery type

Can I just make the rather obvious observation that a compact film camera, and one that dates from 2002 at the earliest, is most likely to be owned by someone of the older generations. That ties in well with someone who would be on Brighton beach when the weather isn't that great, and someone who would put their initials on a camera case.

They are also likely to have a been on a trip there (if they were from Brighton they would be unlikely to take a camera to the beach), from a location not too far away (south east certainly), maybe an OAP trip out? They'd also not have a smartphone, or be online particularly.

Thus probably the most fruitful way to search is probably to find which coach companies had trips to Brighton that day - and then from where.

Otherwise I fear that even after finding someone to develop the film you are still going to be stuck with pictures of person X and no way of tracking down who they are.

@Anonymous: thank you, Anonymous. Your ability to not read the existing comments is commendable!

Get over yourself, you're not half as smart as you'd wish you were.

If YOU'D actually read what was written you'd find there was more there than was in the comments above - forming a logical chain. A chain it appears from YOUR previous comments you are incapable of making.

Thank you @Anonymous. Your ability to remain anonymous *and* stroppy knows no bounds!

I'm sorry that you find it annoying that I find it funny that you think, "...you are still going to be stuck with pictures of person X and no way of tracking down who they are".

The idea that a photo of a face would still make it an impossible task - as if only the individual concerned is able to recognise their own face - makes me chuckle.

Of course it's unlikely that it will work. Still, worth a go, eh?

Okay, not exactly the same situation, but there is hope.

(And they did have to get the pictures to do it)

I'm amazed by the sweeping generalisations people think they can make about the owner.

'Can't possibly be from Brighton'?

Well, maybe they found the camera in the loft and thought it'd be fun to pop to the beach and use up the film

Or just like the warmth of 35mm film and use it to photograph local things.

Or a thousand other possible reasons.

People are a bit, you know, complicated.

Maybe this won't work, maybe it will. Isn't it the right thing to have a go?

I'm just amazed that people are getting so annoyed that a nice person is trying to do a kind thing.

What's the latest update on the camera?

@Steve B: The latest is that I've been away for a few days to attend a family wedding and have been offline and unable to pursue it further. We'll see.

Keep us posted on any further camera news. I for one think it is highly commendable that someone should make the effort to match object to owner, using whatever methods possible.
Too many comments on here, and / or Twitter undermine the kind actions being carried out. If only everyone made the smallest of efforts, to be that little bit nicer, then the world would be a better place for it.

Keep up the good work.

Hello there, Did you ever get the pictures developed?

Yes! And the results ended up being discussed in one of the episodes of series 2 of Modern Life Is Goodish...

Did this camera ever find an owner after the show?

Did the owner get in touch Dave

Did the owner get in touch Dave