You might well have seen a trail for the new series by now. There are a few different variations out there, but the gist of them all is that someone in the marketing department is treating the show like a price-comparison website and trying to bribe people to watch the show by offering a free toy in the shape of a, um, Dave Gorman action-figure. But I overrule the idea because it's silly. (And they get withdrawn anyway because they're toxic and dangerous etc etc.)

I haven't actually seen one of the ads go out as yet - but I can always tell when one's been on the telly because I get a small flurry of tweets from people telling me they actually want one of the dolls.
Some people seem genuinely disappointed that they're not available. But they're not.

When I respond to say as much, some people seem convinced that this is some kind of cunning double bluff and that we'll make them available as an ironic, nonsense bit of merchandise at some point.

For what it's worth I've always found the idea of merchandise a bit weird for a comic. Maybe weird's not right. Uncomfortable?

I've never been comfortable with the idea of selling myself as a product. I tell stories for a living. I'll cheerfully sell you tickets, books and DVDs and so on because those are all just different ways of delivering what I do.

T-shirts, key-rings and, heaven help us, dolls are something else. I know plenty of people who do sell that kind of merchandise - some of them, friends, many of them comics I admire.
And people have tried to persuade me to join their ranks because it could/would make touring a more lucrative enterprise.

But there's always been something making me resist the idea. The way I see it: I don't think I'd be comfortable standing next to someone in a pub if they had my face on their t-shirt. So it would be a bit weird of me to sell them that t-shirt?

I don't know. I don't think there's any great moral argument being made here... it's just not something I'm very comfortable with.

That doesn't mean that on the day of the shoot I wasn't quite keen on getting hold of one of them when we'd finished.

But it wasn't allowed. Presumably, because they needed them all for some post-production reason.

I'm probably not the best judge as to whether or not they look like me or not but I'm not very convinced. On the day I spent some time trying to work it out.

I'd hold one in my hands and look at it from all angles and as I turned it slowly between my fingers, there'd always be one moment - just one, precise angle - where it seemed to resemble me... but then a millimeter more rotation and it would look nothing like me again.

I wanted to get one because I wanted to send it to my Mum. Anonymously. She didn't know anything about the trail and there would have been ample opportunity to have one dropped off at her house before any of the ads had been shown on the box. Imagine coming home to find a doll designed to look like your son waiting for you without any context to explain its existence?

She'd have called me to ask what it was and why it was there. I'd have denied all knowledge of it. She'd have believed me and...

I don't know what's happened to them since the shoot. I dread to think. 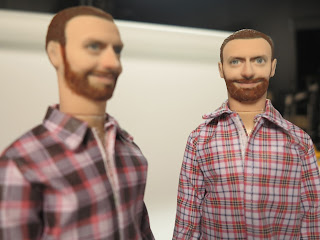 The heads and the clothes were obviously all made for the job. (Whoever painted the heads very flatteringly left all the grey out of my beard - which I'm very grateful for.) But the bodies were all from existing dolls. I have the body of a One Direction singer, apparently.

I think they were all Nialls. Or maybe they were Liams. They had to all be the same one because the neck size varies from doll to doll otherwise.

So pity the poor props buyer who had to go to a toy shop and buy eight Niall dolls.

Lets hope that they make their way to ebay.

Lets hope that they make their way to eBay.

If you really want one for yourself Dave have you looked at www.myfaceonafigure.com ?

I think the only thing worse than having a doll made to look like me, would be to have a bunch of them made and then not know where in the world they are or when they're going to turn up... Can I suggest that your Mum is in cahoots with the the marketing department and will soon do to you what you were going to do to her...?

Go to an asda superstore, they have what looks like an igloo and take measurements to make you an exact replica...if you really want to send one to mum-do it right!

Go to an asda superstore, they have what looks like an igloo and take measurements to make you an exact replica...if you really want to send one to mum-do it right!

My first thought when I saw the ad was "I need a Dave Gorman doll in my life!"

I think PR have been pulling your leg Dave, these are clearly last year's Michael Legge figures which have been re-boxed for the shoot...

You know the bit you used to do about so-called lookalikes who look nothing like you? Surely this would make a nice coda to that.

Did you pull a funny face when they were taking the photos for them?

The good news is they look nothing like you; the bad news is that may not prevent the voodoo from working. You really should have insisted on keeping them!

Opportunity missed though. Add a small projector screen that we could write on and that would be a great way to leave messages for the other half, possibly even the odd "found poem". "Why oh why oh why have I over-spelled yoyo?"

If I hire Martin A who is still listed on the Susan Scott Lookalikes Ltd website, I could get him in a 3-D body scanner (nude if possible) and go into business producing 3-D printed figures to fulfill this demand.