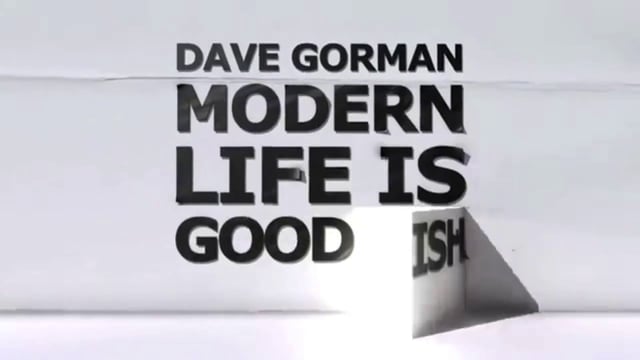 
PS: This is the corporate announcement which contains more numbers I don't really understand.
Posted by Dave Gorman at 11:12 AM

Thank you! Your show makes me happy, so thank you!

Awesome, just hope I can make it to a screening of either 4 or 5.

We've just found it. ..and are loving it. Look forward to series 3!!

@Automaton539 if you mean a recording - we do two shows a night... so there are 4 recordings per 8-episode series. My mailing list gets first dibs on the tickets.

That is great news, the shows have been awesome. Are there any plans on a DVD release or will my Sky+ box just be full of series of Modern Life set to NEVER DELETE?

@Mark Petar: a) Thanks! b) I don't know about a DVD release. It isn't my decision and I don't wield any influence. You'd be better off asking Dave. (The channel)

Great news. The show is awesome. Can't wait to see you again live in Middlesbrough.

Great news Dave (you), and nice decision Dave (the channel)!

All available to watch online now on UKTVPlay!

Nice one Dave - at this rate you'll have the world record for consecutive appearances on 'Dave Gorman's Modern Life is Goodish'!

Right, must set up Sky+ to capture all the magic as I'm away for most of Sept (as I HAD planned to be seeing a certain favourite comedian in Norwich, but said comedian got said comedian's wife up the duff so it was rescheduled).
Looking forward to catching up with Goodish upon my return - a nice tide-over til the show in January.
Oh and congrats on being recommissioned! Obviously I'm delighted, and obviously you and the team deserve all the accolades.

Really pleased at this. It's a brilliant show and having chatted to you after one of your gigs in Edinburgh couldn't have happened to a nicer bloke.

That's great news...we are big fans of Mr Gorman in our house! In fact, so much so that we are thinking of packing our flat caps and whippets and venturing down to the big smoke to watch a recording if we can get tickets. What is the lower age limit on tickets please? Keep up the good work :D

Yes!
More comedy gold from one of my favourite comedians!
Congrats dave I can't wait.

An aside - I may have stumbled across a potential broadcast date, via the British Comedy Guide.

On the http://www.comedy.co.uk/guide/tv/dave_gorman_modern_life/details/ page is this:

Given that October 27th is in fact a Tuesday - that would put episode 1 on September 8th.