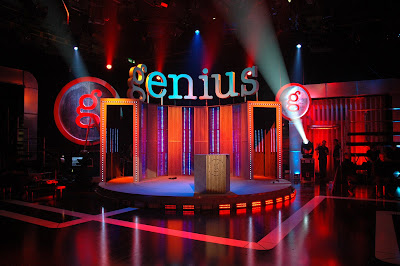 For the next recordings we're going to jig a few things about and add in a few more rows of seating... that way we'll be able to get a load more people in too. Hurrah for things like that.
Posted by Dave Gorman at 8:42 AM

I love the radio show -- I can't wait to see how this turns out. Thanks so much for the care and effort you put into your work, it really shows.

When are you hoping it will air Dave? Can't wait to see it!

A revolving stage with the poor individual being sent out like a one of those animated figure cuckoo clocks?

Shackle them down and give the audience rotten tomatoes in series 2 for that authentic reality TV experience.

How come you're aloud to show a picture of the set, but I was denied by the staff for trying having my photo taken with Alun on-set (not even trying to get a photo OF the set?!)

By the way, I thought the seating was extremely uncomfortable and my back now hates the BBC :)

The seating is uncomfortable but my back survived thanks to a lovely seat at the back :o)

Really enjoyed the show, Dave. Jonathan Pryce was great, really funny. Can't wait to watch it on tv. Any idea when it will be on?

Speak for yourself, I love dusting!

I also lead a very sad and lonely life.