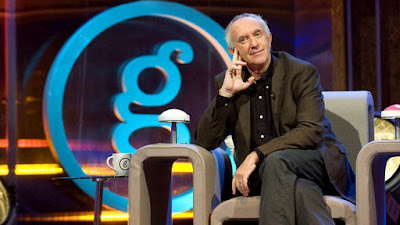 One of the things I've always insisted on with Genius is that we don't only rely on comedians to be the guests. Having a few in each series is fine but we should be confident enough with the format to know that it will still be a funny show whether or not our guest is a professional comic.

I also love it when the guest has enough years on the clock to mean they're invested with some believable wisdom. All of which means that this weeks' guest: Jonathan Pryce was right up my street.

It's nice when someone else recognises there's some merit in these thoughts. This weeks' Time Out has (another) nice piece about the show:
...Genius is so pointlessly silly that it remains enjoyable, and the celebrity guests are deftly chosen. Actor Jonathan Pryce leaps headfirst into every given situation, presenting the weather forecast in regional accents and advertising a new, symmetrical Isle of Wight that's better for tourism...

It was properly exciting for me having someone as well regarded as Jonathan Pryce in the chair.
He's a Bond villain. He's in Pirates of the Caribbean. He's the star of Brazil; one of the best films ever. And he was a brilliant Genius guest. Completely in the spirit of the show. Funny funny, but also funny simply for taking the ideas quite so seriously. A real star.

Incidentally... I see that Piers Morgan managed to get a half page in The Sun for saying that he's banned David Beckham from his chat show. How the hell did that happen? Do you think David Beckham was ringing up begging to be on the show? No. If the show had asked him do you think he'd have said yes? No. You can't ban someone from doing something they were never going to do anyway. It's completely meaningless.

It's almost as if Piers Morgan has some uncanny knack for understanding the tabloid agenda... although quite how the former tabloid editor would learn that sort of thing is beyond me.

Still, half a page in the Sun is not to be sniffed at. So as host of Genius let me tell you that Nelson Mandela is banned from the show. As is Bill Clinton. And I'm banning Angelina Jolie from my bedroom too. And Madonna is absolutely 100% forbidden from adopting me.

Glad I cleared that up. Something else which needs clarifying is the schedule for Genius. If you're in England or Scotland it's on tonight (Friday) at the regular time of 10pm. If you're in Northern Ireland however this week's show has been moved to a different time. It's on Friday night... but so late as to be Saturday morning: 35 minutes past midnight. Thanks Northern Ireland schedulers... what have we ever done to you? In Wales the show doesn't even have a regular time. Three weeks running and the show's been on at a different time on each occasion. The first week we were moved to Saturday night. Then for week two it was on the Friday night like everyone else. Now this week, we're back to being a day later than the other regions and twenty minutes earlier. Wales: 9.40pm. Saturday. Criminy... 10pm on Friday was meant to be a great slot... I had no idea how much the regions were going to screw us around. But enough of the harumphing... it's a good'un, enjoy!

Oh... by the way, I'm getting a lot of e-mails (and Tweets and the like) from people with Genius ideas. I'm the worst possible person to send them to. I'm an idiot. I'm disorganised. I remember that we had an idea but I lose the e-mail. Or I forward the e-mail but we don't get a phone number for you and then when we try to get in touch your e-mail address fails and we're left with nothing else. That's no use to anyone. You really have a far better chance of getting your idea in the hat by sending it in via the show's website: bbc.co.uk/genius Go on. You know it makes sense. Sort of.
Posted by Dave Gorman at 1:21 AM

I'm out having a good time on Friday nights. Something involving alcohol and rock'n'roll. Thankfully the BBC website has something called iPlayer so I can watch Genius tomorrow instead.

I saw Jonathan Pryce doing the regional accent weather forecast on Something for the Weekend last week. He was amazing. And it's one of those ideas where you think "maybe, just maybe this is a go-er" - they had topless weather didn't they and this isn't half as off the scale.

Thanks for the email update, Dave, much appreciated. My Sky Plus box is all set to record Genius every week, but I do like your gentle reminders! And I learned that Brazil is one of your favourite films - I love it too. I've watched it so many times now and always see something new in it. Brilliant.

Thanks Mary... I try not to be a pain with the mailing list by overusing it, but with the changing regional schedule it seems appropriate.

According to the Times tonight's episode is the best yet. That's nice!

Tell me Dave, what was the Genius 'success' you referred to during the Steve Wright interview?

I would love to see Jonathan Pryce's forecast again!

Is it posted anywhere on the web pls? If not, could you post the short video somewhere and let us know pls?

I think it can be seen on the Genius website: bbc.co.uk/genius but of course I recommend you see it by watching tonight's show...

I take it Piers Morgan is banned from Genius as well?

Just watched, excellent! I was in the audience for that one. Shame they didn't get time to show you cutting up of the massive map of the Isle of White.

I listened to all the radio versions of this show and am REALLY enjoying the TV version too.
What I also loved is that Genius was mentioned in the Dr. Who magazine I was reading yesterday because both Catherine Tate and Jonathan Pryce are Whovians.
:D
Being a Nerd only gets better with time.

Here's a way catching the upcoming episodes and regional time variations in your google calendar (or any other calendar sw for that matter). The BBC websites offers a calendar file (.ics) for Genius which states when the next upcoming episode is to be aired. The link is http://www.bbc.co.uk/programmes/b00jg76g/episodes/upcoming.ics
You can then add this to your Google Calendar using the option Add -> Add by URL.

I am loving Genius, it seems to have transferred well from radio to small screen. Johnathon Pryce was an excellent choice of guest. Congratulations on having such a successful series.

Thank god for iplayer, completely forgot you were back on the box.

Great! Thanks Dave!
I did watch the program when it was broadcasted the other night and enjoyed it very much! Pryce and you together were great!

Could you post the weather forecast on youtube pls? Just that bit... it's just hilarious and would like to be able to watch after the time on iplayer...

Your blog reminded me to watch your show, and I thought that was the best one yet. Especially with the Regional Weather Forecasting, but I feel that idea is already on board, but Jonathan Pryce took it to whole new levels.

Is Jonathan Pryce as legendary off camera as he is on?

I loved your cardigan, seriously!! where did you get it from, pray tell?

Best guest of the series so far. If only Jonathan had been on the week before, then maybe the true genius that is oppositology wouldn't have been rejected :-(

I'm now thinking that the opposite of Frank Skinner is a Swiss Army Knife...

@anonymous: I think that one came from Comme de Garcons (sp?)

@stephen: I'm constantly amused that people get into the show to such a degree that they care about whether the guest gets it right or not! If we were giving away a car or a cash prize it would turn into something competitive and I like it for being the silly show it is. There is no right or wrong and they all get heard so you at home get to form your own opinion anyway. Who gets declared Genius and who wins the trophy isn't _really_ important at the end of the day.

I love the way that each guest brings their own personality to it and their own criteria for judging it (and think this seems to be more the case on the TV than it was on the radio.)

It would be boring if we told them how to judge and steered them to all do it in the same way.

Dave, the red button 2 clip stops working about 8 minutes through :-(

Thanks... I've told the technical bods...

I recently banned U2 from playing in my livingroom. I also had to be very firm and slap a veto on Olivia Newton John wearing my hats when she goes jogging. And as for Eva Mendez borrowing my pyjamas, well, it's out of the question.