Doing a tour by bike offers two distinct challenges. I'm obviously going to be pushing myself physically but the fact that when I get to each town I won't be able to disengage the brain and switch off creates a mentally challenging situation also.

But, as with all these things, the challenge has started already. I have to try and improve my fitness - mental and physical - before the tour starts. I have exercise my writing and performing muscles as well as my legs... there's no point being able to cycle all that way if the show's not up to snuff and there's no point having a great show and not being able to get there.

So, as often as I can I pop out to gigs in town to try out new ideas and play with material. Slowly, incrementally, the amount of stuff I have in my mental locker increases. There are nights like Old Rope on a Monday and various nights at Lowdown At The Albany - not to mention all the regular club nights in London where I'm lucky enough to be able to get a small amount of stage time every now and then. I find it fascinating how material starts to coalesce... the first time you say it, it kinda works. After three or four goes it suddenly gels into something that feels more whole. Or it finds a place next to something else that lifts it. Or something. But it isn't simply a matter of trying out sufficient bits until you've added up enough minutes... things have to hang together. Disparate bits of material that might work individually can work for or against each other when placed in the same set.

So when I've got a chunk of new stuff together in bits and bobs I need to try a longer set in order to see how it flows. To that end I recently did a couple of longer spots at a couple of great London gigs: Islington's ace monthly; Comedy Gold and Kingston's just as ace, Outside The Box.

I'd highly recommend both clubs to anyone wanting to see live comedy because they're both discerningly booked and both likely to turn up interesting surprise guests. I asked if I could compere at Comedy Gold because I knew that would give me a chance to do a bit longer and also because I knew it would offer a different challenge - it was a fun night - and last night I popped into Out Of The Box for the second time. Which was very satisfying for a couple of reasons. 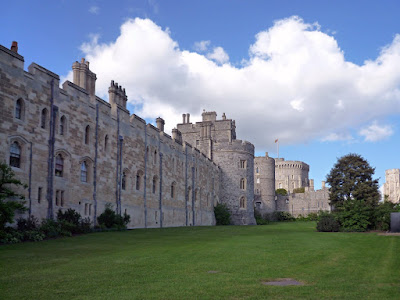 I don't have a proper training schedule in place because I don't keep regular hours... I just try and cycle as and when I can. I've been trying to get some miles under my belt on the lovely new bike but took it out for a proper ride for the first time on Saturday. I went to Windsor and back, a round trip of just over 60 miles - easily the longest ride I've done since the London to Brighton run a few years ago. (Only without any kind of climb to rival Ditchling Beacon) I felt okay on Sunday but didn't have the time for a ride although I did get a good long walk in.

But Monday was a perfect opportunity to get both types of training in. A round trip to Kingston and back added up to around 35 miles - which I did on my old bike because I haven't got locks and luggage sorted for the new one yet - and I set myself the challenge of doing a set that didn't overlap with anything I'd done there the last time.

Because normally I'm doing a short set of new stuff - some of which I'll keep and some of which I won't - or doing a longer set that's made up of old and new and whatever's on my mind at the minute - placing myself under that restriction made it the best barometer I've had so far as to how the writing has been going while the Saturday ride and the journey there also gave me a small, bitesize taste as to the physical side of things. It was a far from perfect gig but the hit rate was still way better than I'd been expecting it to be and the ride to and from was actually just fun. Today - however briefly - I feel confident that things are on target.

It'll be brief, mind you. After all, fear that I'm falling behind schedule is the greatest motivator of all.


PS: I have come up with what I think is probably a sure fire way to stimulate the economy. It could save us. More soon...
Posted by Dave Gorman at 1:31 PM

If the Earth now gets destroyed by a Vogon Constructor fleet; I'm blaming you.

As long as he's got a towel Judith, he'll be ok.

Well he's always struck me as quite the hoopy frood...

I'll stop before this turns into a geek fest. Sorry Dave - and best wishes for your insane schedule.

I'm going to continue the Geek-fest by saying:

Whenever I've sassed that hoopy Dave Gorman, I've alway thought to myself, 'Now there's a frood who really knows where his towel is!'

Off topic, but is this Friday's episode of Genius the last in the series?

I ask because I remember reading somewhere that it's six episodes long, and by my reckoning this coming Friday's show, with Stewart Lee is the sixth.

But I've got Genius to record on my Sky+ using the series link, and the last episode of a series doesn't have the little series link green logo next to it. But this weeks Genius still has that little logo...

I don't know if this has already been mentioned, Dave. But you have you been approached by any dopers yet?

We all know that cycling is an energy sapping event. We also know that lots of cyclists other than Lance Armstrong, gobble lots of drugs to help them keep going.


Why is he featured so often? I think people are conspiring against Mr. Gorman.

I meant to ask, Dave - do you like to listen to the walkman when you're cycling, or do you prefer the sounds of your surroundings?

Personally, a blindfold's about as much use as a walkman when I'm riding the old bike, know what I mean?

Has anyone ever recognised you and tried to get you off your bike to talk to you?