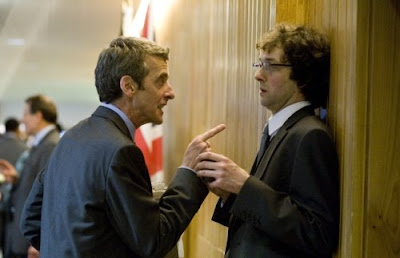 I went to the premiere of In The Loop on Wednesday night. It's brilliant. I love The Thick Of It on TV - and it comes from the same creative team - so I had high hopes for it. But also some concerns.

Peter Capaldi plays Malcolm Tucker - the same spin-doctor role he plays in The Thick Of It but many of the other actors are involved and are playing different roles. For example, I'm used to seeing Chris Addison as Ollie but here he plays Toby. Admittedly the characters are very similar to each other... but the action has shifted to a new department so their jobs are nominally different and their relationships to other characters are too. I thought the knowledge that Thick Of It Capaldi knows Thick Of It Addison might make it weird that In The Loop Capaldi doesn't initially know In The Loop Addison. Imagine watching an Eastenders spin off in which Babs Windsor played Peggy Mitchell and Ross Kemp appeared - but not as her son Grant Mitchell. That'd be weird. Very weird. And, one imagines, not very good. Well this is nothing at all like that. Whether or not you've ever seen The Thick Of It doesn't matter a jot. It isn't a film-length episode of the TV show... it's its own entity. You quickly allow the new story to envelop you and take it all at face value. The cast are flawless but the two I've mentioned already - Capaldi and Addison - are, alongside Tom Hollander's flappy, out-of-his-depth career politician Minister, exceptional.

Perhaps most weirdly the film appears to contain two premonitions. There are two lines in the fictional story that echo tabloid news stories from the last couple of weeks. They can't possibly have known they were going to happen. It almost makes me think that Jacqui Smith's husband is actually working for the film's PR company. Almost.
Posted by Dave Gorman at 11:51 PM

I'm glad this is a good film. I saw a bit on it on Film 2009 a few weeks ago, and heard Mr Iannucci was involved and obviously got very excited. But when getting very excited about something there's always a nagging doubt that it's going to end up crap.

I wonder if it's worth breaking my 'no cinema unless bond' rule for?

I think so. I watch most films off DVD these days, and I even prefer to watch The Thick Of It on my own, but you should treat yourself. There is something thrilling about being in a huge hall of people all sharing your sense of humour, and all laughing.

I was lucky enough to see this back in January when it was the opening film at the Glasgow Film Festival and thought it was fantastic. I knew about The Thick of It but hadn't seen anything more than clips from it so I was able to disconnect the characters in In The Loop from those in The Thick of It.

The level of laughter from the audience was so loud that I actually missed some of the lines so plan to see this again in a couple of weeks when it's out on general release.

For me, Tom Hollander was definitely the best thing in it.

I've kind of gone in reverse as having seen the film, I'm now planning to order the DVD of the first series of The Thick of It. I think the specials are also out on DVD? Time for more research I think.