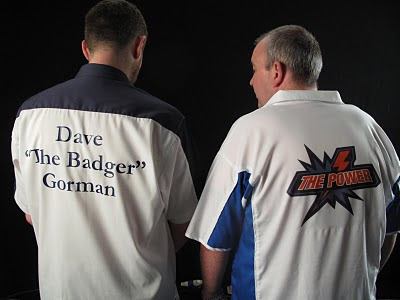 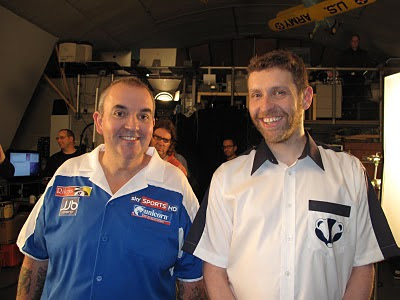 But I have to change my head back to stand-up mode today. I have my last preview gig in Andover tonight... and then I'm recording the DVD on Monday. I'm doing two shows on Monday - one at 6pm and one at 8.45 and I think there are still tickets left for the earlier of the two if you fancy it.
Posted by Dave Gorman at 10:48 AM

Congratulations, my best is three treble ones. I was on for a 180 once, but if I'd got it I would have bust.

If I could offer some advice, you seem to throw much better when you slow down a bit. :-)

Great to see you last night Dave - and throw a few darts with you, I'm about to post up my version of the night... where I ALMOST beat Taylor, by letting him leave me on 200 while he finished. :)

You've not been enjoying too many beers in Exeter have you?

Phil's "The Power" logo looks suspiciously like the American sports drink Gatorade's one.